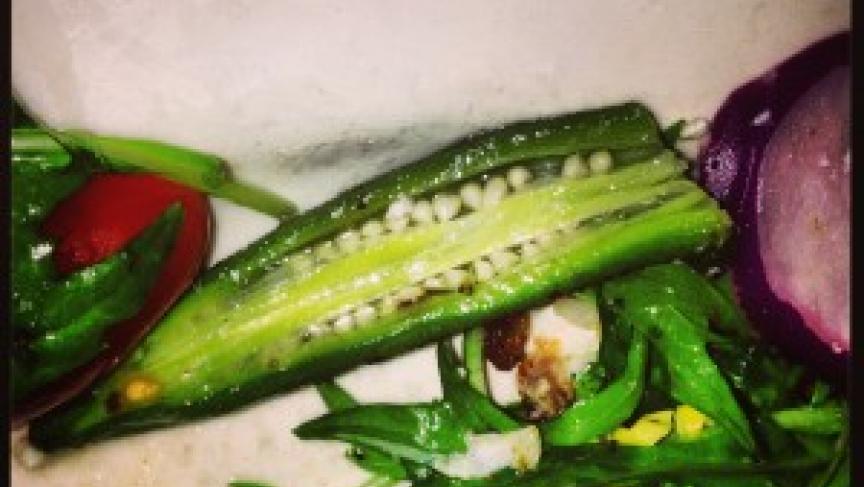 The French word for okra is gombo and is the namesake for the New Orleans culinary dish, gumbo. (Photo by Marco Werman.)

One of the things that strikes you about the “Big Easy” is the language of the place.

It’s a reflection of the diversity and wild history of the city.

Like the advice “Let the good times roll,” or “laissez les bons temps rouler,” there’s a unique word-for-word english-to-cajun French construction that shouldn't work — but does.

And whenever new people come to New Orleans, the words and the music and the food evolve. When you listen to trumpeter Kermit Ruffins performing at the Bullet’s Sports Bar in the city’s seventh ward, it’s easy to forget that all this comes out of a few hundreds years of history.

Not to mention the Native Americans who mixed with African slaves and set down the local creole flavor. Not to mention the entire Caribbean, which New Orleans was the center of long before Miami assumed the mantle in the 20th century.

Yeah, that’s a lot of stuff going on.

“It is that place where things mix. People often have referred to the culture of New Orleans as a gumbo,” Harris said.

Now you may know gumbo as a stew of various meats and some vegetables served over rice. It’s classic New Orleans. And yet the word gumbo refers to what used to be a key ingredient in the stew.

“If you go anywhere in the French speaking world today and want okra, you ask for gombo. The word 'gombo' comes from the Bantu languages: 'ochigombo' and 'quibombo,' which mean okra. So okra I think is intensely connected to this place,” Harris said.

And it’s not just because New Orleanians like their okra.

Gumbo reflects the diversity of the city.

“It’s a case where these parts make an extraordinary whole without totally melting," she said. "If you have a good gumbo, you can still see the okra, you still know that that was Andouille, you’re still aware of the fact that that was duck or chicken or what have you. It’s not just a brown stew. It’s something else.”

You can't get away from that metaphor in New Orleans.

“We all do things in a different way. But when we come together and put all those ideas together, it’s really enriching,” said Father Anthony Anala, also known as Father Tony. He’s a priest, from Ghana in West Africa who’s been leading the congregation at Our Lady Star of the Sea in New Orleans since 2008.

As a West African he sees connections between New Orleans and their part of the world.

When Father Tony got to New Orleans five years ago, imagine his surprise. He left the home of okra and arrived in the home of gumbo. Not only that, this past April, this Ghanaian priest got about as deep into New Orleans musical culture as you can get.

He presided over the funeral of a Mardi Gras Indian, a Black Seminole named Cyril Big Six Chief Ironhorse Green.

“There was that mood of celebrating the achievements he has had. And so it was more uplifting, upbeat,” he said.

And that resonated with him. The whole idea of a funeral being a moment of celebration, that’s something you find at funerals in northern Ghana and Togo. It’s a party time.

“Exactly. All the families come for one funeral, then they all go to another funeral and you can celebrate funerals for like a month,” he said.

“There’s a bit of spiciness in the food, and the gumbo, it tastes like back home," he said.

And sometimes those “other things” become the standard. That’s what happened with Vietnamese bakery Dong Phuong. Vietnam was hobbling back from war when the Tranh family left and came to New Orleans in 1980. Vietnam and New Orleans share French influence and Madame Huong Tran’s family in Vietnam were bakers. They brought their trade here.

To accommodate local tastes, the Trans came up with a sandwich roll that worked for both their banh mi Vietnamese Sandwiches and American subs.

“The French took over Vietnam 100 years. So we take some recipe from French, some American, also from my parents too. Three recipes in one," she said.

So now you get that crunchy baguette outside.

The Dong Phuong bakery is now the number one source in all of New Orleans for the bread for the city’s famed Po-Boy: that sub stuffed with fried oysters or shrimp.

This pleases pianist and songwriter Allen Toussaint to no end when he returns home from touring.

“Shrimp Po-Boy. Dressed. You have to say dressed!” he said. We’re all “villains in a feeding frenzy. We do that a lot here. But everywhere I go, I'm always glad to get home, but when I leave New Orleans, I never go anywhere else looking for any part of New Orleans. I collect scraps and wishbones and feathers everywhere I go, and then I come home and try and produce a chicken. And it works, and the more extensive travel is, the more I have in my reservoir.”

Toussaint has a song that reflects the Big Easy.

“A yankee saw a crawfish called it a baby lobster

We laughed so hard we nearly busted our sides.

But when he tasted the difference he started raving so much he got a southern welcome arms open wide.

But in the midst of all this fine southern cuisine, I’ll take the crawfish everyday, everytime.

I could eat crawfish everyday.

I could eat crawfish everyday.”