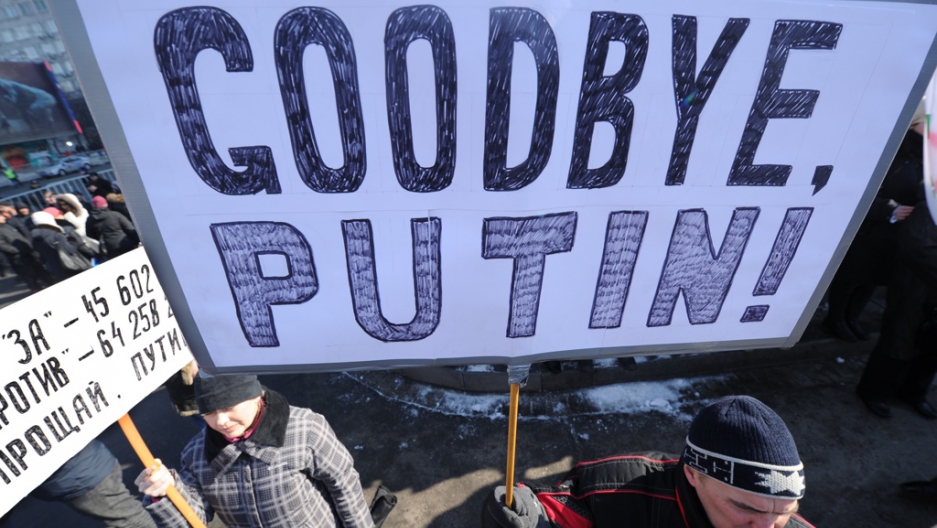 Demonstrators take part in anti-Putin rally in the central Arbat area in Moscow, on March 10. Russia's protest movement against Vladimir Putin rallied several thousand people for a new demonstration that is a test of their strength and tactics after his crushing election victory.
Credit: KIRILL KUDRYAVTSEV
Share

“Nobody and nothing will stop Russia on the road to strengthening democracy and ensuring human rights and freedoms,” claimed Russian President Vladimir Putin in 2004. Today, Putin himself seems like the roadblock to human rights. Recently, Putin has been flexing his dictatorial muscle, with the jailing of opposition leader Alexi Navalny on dubious grounds being the most recent example. To put this political maneuver in perspective, here’s a look back at some of the ways Putin has abused his power during his presidency and prime ministership:

Putin speaks during a victory rally after the 2012 presidential election on March, 4, 2012. (OLEG NIKISHIN/Getty Images)

In the 2012 presidential election, Putin received 64.7 percent of the vote, avoiding a runoff. But about 20 percent of the vote came from what is known as the “administrative resource,” which are either votes from employees of government-funded institutions, whose supervisors report to Putin or his subordinates, or assistance with voter fraud, such as stuffing ballots. State employees weren’t required by law to vote for Putin, but some analysts say there was often pressure on government employees to vote for Putin to show their loyalty to the administration. Some reports said schools even pressured teachers to vote for Putin, threatening to fire them if they didn’t.

In the early days of Putin’s presidency, he used an overdue judicial reform as an opportunity to place all of the country’s senior judges under the control of the Kremlin. This effectively eliminated the separation of the judicial and executive branches, a key distinction in most democracies. Additionally, after repeated attacks by Chechen terrorists, Putin sought to strengthen the Kremlin's centralized power. In December 2004, he eliminated the direct election of provincial governors by the people for the next eight years.

3) He jails protesters and activists

One of the jailed members of the all-girl punk band Pussy Riot. (MAKSIM BLINOV/Getty Images)

With government dominated by Putin and loyal followers, the only place Russian citizens are able to voice their discontent is in the street. And when they do, they better be ready to pay the price. Twenty-seven protesters were arrested for demonstrating on the eve of Putin’s 2012 inauguration. Some could face up to 10 years in prison. Also, in June, dozens of gay pride protesters were detained after Putin signed a bill banning gay “propaganda” and censoring all pro-gay advocacy, including any public display of gay life. Perhaps the most famous Russians behind bars are the members of the band Pussy Riot, who were convicted of hooliganism after staging an anti-Putin performance at a cathedral in Moscow. The band members were sentenced to two years in prison.

Journalism is a risky business in Russia, so much so that the International Federation of Journalists has kept a record of the hundreds of journalists that have died or disappeared in Russia since the fall of the Soviet Union. What has been most troubling during Putin’s presidency, however, is the government’s apparent apathy toward these high-profile murders. Some suspect a sinister motive behind the lack of convictions: since 2000, the Committee to Protect Journalists reports as many as 20 journalists have been killed for their reporting. The 2006 murder of Anna Politkovskaya is perhaps the most infamous example. A highly-respected journalist with a well-known history of opposing Putin’s Chechnya policy, she was shot at point-blank range in her Moscow apartment building in what was later deemed a contract killing. After eight years of deliberation, the murder remains unsolved. Corruption, cronyism, and allegations of police involvement have plagued the Politkovskaya case, and have left many disenchanted with Putin’s leadership.

5) His government took control of the news

Putin on television during his annual televised phone-in show in 2009. (NATALIA KOLESNIKOVA/Getty Images)

Under Putin’s leadership, the autonomy of most every media outlet has significantly decreased, none more so than television. Following his ascension to the presidency, Putin has made a series of high profile government acquisitions of television networks, with the government, as well as state-owned gas giant Gazprom, nationalizing most of the popular news channels. Predictably, the new state-run television networks immediately started towing the party line. In addition, there have been allegations that the Russian government has circulated a blacklist of people who are banned from appearing on Russian television. Although Putin has strongly denied these criticisms, observers claim that censorship has become a way of life within state-owned media. Indeed, media nationalization seems to be working in the president’s favor: Freedom House estimates that 89 percent of Russians who voted for Putin’s United Russia Party got their news from state-owned television.

6) He nationalized some major corporations, on the cheap

In lieu of liberalizing economic reforms that might bring Russia out of its decades-long post-Soviet malaise, Putin has instead turned to heavy-handed state capitalism as his driving policy. Taking a page out of the Chinese handbook, Putin nationalized some of Russia’s largest companies, including oil companies Gazprom and Rosneft, along with the United Aircraft corporation, in a series of moves that Putin asserted would “protect [the] interests of the Russian Federation.” However, in the case of Gazprom, questions arose about the pricing of the government-purchased shares. Although investment banks Morgan Stanley and Dresdner Kleinwort valued the extra 10.7 percent majority stake acquired by the government at $8.4 and $11.5 billion respectively, Putin finalized the deal at $7 billion. In one fell swoop, the Russian government secured control over one of the largest profit engines in the world — all at a discount price.