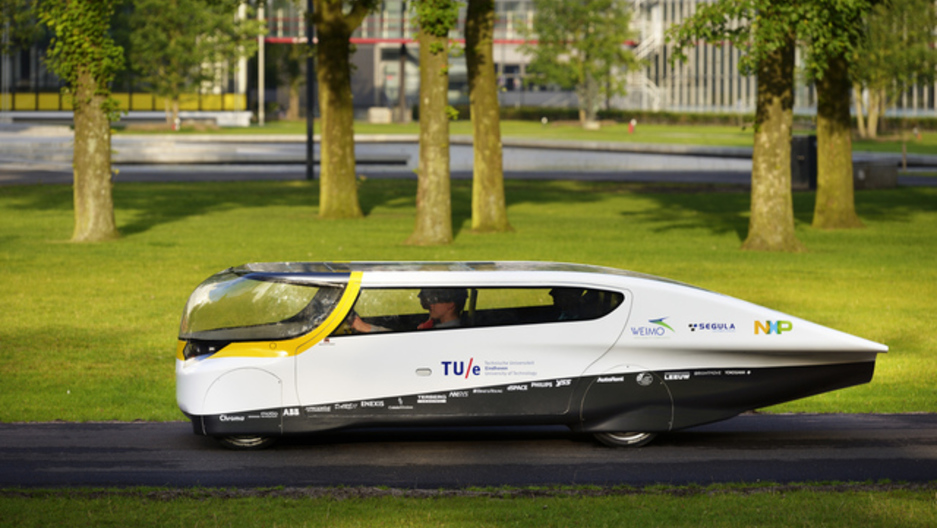 Stella is the world's first solar-powered family car. It was unveiled at a Dutch university on July 4. (Photo courtesy of Bart van Overbeeke.)

Shaped like an aerodynamic bike helmet and with room for up to four people, a new concept car from the Solar Team Eindhoven at the Netherlands' Eindoven University of Technology is solar-powered, energy-positive, and believed by the team to be the first of its kind.

"It’s a four-seater car. The windscreen in the front is very curved, and it goes, actually, in the tail it goes all back to a pointy end at the back to make it as aerodynamic as possible," said Roy Cobbenhagen, the technical manager for the project. "And the entire rooftop is covered with solar panels, so that’s six square meters of beautiful blue solar panels."

The team debuted the car, called "Stella" on July 4 in an unveiling ceremony with curtains, smoke machines and loud electronic music.

Though solar-powered vehicles have existed for decades, the technology powering them hasn't advanced far enough for engineers to create a family-sized car, at least until recently, Cobbenhagen said.

"I think that we’ve seen enormous increase in the use of electric vehicles, so a lot of technology has been advanced, in the last couple of years especially," he said. "So now with the technology of the batteries, now it’s good enough and the solar panels are good enough, that this is now possible."

The team will race Stella 1800 miles from home at the 2013 World Solar Challenge in the Australian outback, where they'll compete in a newly-formed class of practical cars.

Stella can travel more than 300 miles on a full charge and had trunk space enough for four pieces of luggage. Tests have shown the car could give energy back to the grid 10 months out of the year in the Netherlands.

"If you look at cars today, most cars are actually, ironically, standing still most of the day. So people go to work and the car is parked outside," Cobbenhagen said. "Now with solar panels, you are charging your car, but after a little while the battery is fully charged, but sun still hits the solar panels, so you can feed that back to the grid."