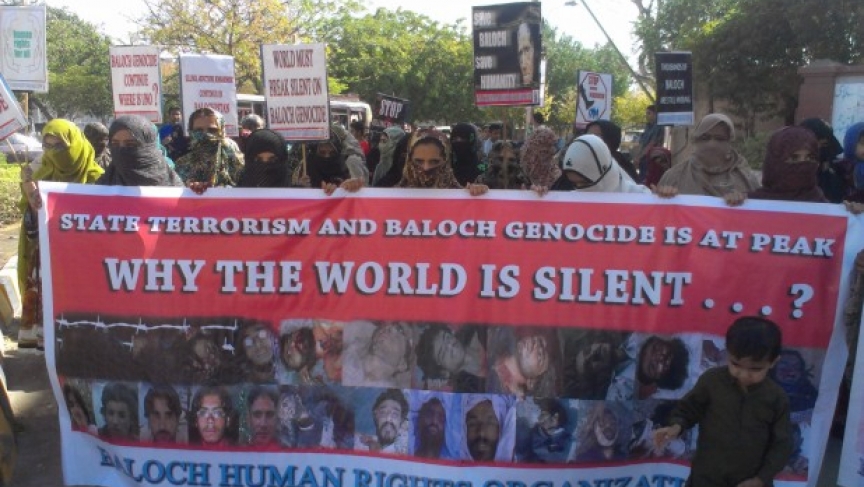 For several years, Pakistan has been facing a separatist insurgency by ethno-nationalist rebels belonging to the Baloch ethnic group. The guerrillas in the southwest province of Balochistan have become increasingly daring with their attacks. Two weeks ago, they shocked the rest of Pakistan by destroying the historic residence of Pakistan's founding father Mohammed Ali Jinnah in the town of Ziarat.

Balochistan is one of the most underdeveloped regions in Pakistan, and has traditionally had a heavily male-dominated patriarchal society. Women have rarely had a role in public life. But things have been changing recently, as increasing numbers of women are taking up active and leading roles in the Baloch nationalist movement.

One such women is Zarina Baloch. When her cousin was found murdered in February, it was a turning point in her life. Baloch's cousin, Sangat Sana, was a young political activist who supported the idea of Balochistan's secession from Pakistan. He had been missing for two years before his mutilated body was found.

"I was in Karachi when I heard the news that the mutilated body has been found in Turbat. I don't have words. What can I do?" she says. "I heard there is a protest by BHRO the next day, so I have to join that protest and I joined. I even spoke to many news channels and told them that my brother has been killed. I got his mutilated body."

Zarina Baloch was a high school student then, and it was the first time she became politically active. Since then, attending protest rallies and sit-ins has become a part of her daily routine.

She attended a recent protest rally in front of the Karachi Press Club, with other women, young and old. They're all wearing traditional Balochi dresses with intricate colorful embroidery, and most of their faces are covered with veils.

And at the back of the rally are a handful of men straggling along, and hardly as involved in the protest as the women.

"Shame on the United Nation's silence!" the protest leader chants. "Where are you UN?"

This protest is about what is known in Pakistan as the "missing persons" issue.

The dead bodies of many of the missing people have been found days, months or years later, often dumped on the roadside bearing signs of mutilation. Human rights organizations point the finger at the military and intelligence agencies.

Baloch nationalists have complained for decades of ethnic discrimination and exploitation by the Pakistani state. But the recent state-sponsored violence has pushed the movement in a new direction. What started as a demand for more rights has turned into a movement for outright secession.

And increasingly, women like Zarina are playing more active roles in that movement.

"Baloch society has traditionally been heavily segregated," he says. "Women rarely leave the home, and when they do it is only for education. But ever since this barbarity of abducting and killing, and military operations started, women whose husbands, brothers, or father have been abducted have started taking to the street to raise their voices in protest."

Maybe the most prominent female among the Baloch separatists is 29-year-old Karima Baloch. She is the vice-chair of the Baloch Students Organization. In 2009, she was tried in absentia by an anti-terrorist court for sedition. Officials accused her of defiling a Pakistani flag during a protest. She was sentenced to three years prison and is still on the run from authorities.

"And that's what's so striking," she says. "In a region where women are for the most part neither seen nor heard, they are now not just silent supporters of the separatist movement: they've become its leaders."

And while Baloch women are very active in Baloch political activism and organizing, there are no confirmed reports yet of women joining the armed struggle as fighters. But some suggest that time is not far off. It may happen eventually.

Dr. Allah Nazar Baloch is regarded as the Che Guevara of Balochistan. He's a gynecologist-turned-guerrilla commander. He's now leading the armed rebellion in the mountains of Balochistan. He spoke to a student conference a few years ago.

I appeal to my sisters. If in Palestine, Leila Khaled can pick up arms then can't my sisters do the same? They should play Leila Khaled's role. If the Iron Lady Margaret Thatcher can govern over Great Britain, if Tansu Ciller can govern Turkey, if Indira Gandhi can govern India, then don't my sisters have the same talent and capability? They should play their role because this is the demand of the times. History is not written just for men. Both men and women make up the history of any nation.

In the speech, Nazar Baloch cites female revolutionaries from around the world. He exhorts Baloch women to heed their example and join the guerrilla movement.

The idea of women joining the guerrillas has entered the public imagination. And Nazar Baloch isn't the only one putting out that message.

A recent Balochi-language feature film called "Jageen" glorifies the Baloch insurgency. It valorizes the insurgents and vilifies the Pakistani military.

Near the end of the film, the outnumbered rebels find themselves outnumbered and want to surrender. However, a female character calls them cowards for wanting to surrender and says she'll take up arms and fight for the cause if the men are unwilling. In a kind of "Butch Cassidy and The Sundance Kid" ending, the band of rebels hold out against the military for three more days before being killed.

Naela Quadri used to be an assistant professor at the University of Balochistan and is now one of the most prominent female political activists from Balochistan.

At one point, she was hounded by authorities and had to go into hiding. She's been in exile in Afghanistan since 2010, where she heads the World Baloch Women's Forum.

"In one month there were nine military raids on my home to arrest me," she says. "Our children were living in hidden places. For five years in Balochistan we were not able to live together as a family. My mother was very sick and my family needed me but all the time I was hiding here and there and work. It was the first time in Baloch history that a girl was active in politics. Before me there was no one. Many cases were filed against me in different courts."

Quadri says her nationalist struggle isn't just about changing politics in Balochistan. It's aiming for a deeper change in Baloch society. She describes how supportive her parents were when she took her first steps into Baloch politics in her student days.

"In the other parts of the world, women go for shopping, for education, for jobs," she says. "But in Baloch society we live in a tribal society where mobility for women is very strict. Here this grand involvement of women in nationalist movement in freedom movement means a lot.

"It was the first time in Baloch history that a girl was active in Baloch politics," she says. "Before me there was no one. My mother and father told me: It's a big responsibility you are taking on your shoulders. You will make way for millions of Baloch women to participate in politics after you, or you will close the doors for a century."

She knows she, too, is likely a marked woman. But she says, essentially, that it's a question of, "if not me then who?" As in, who will fight for the rights of Baloch people and of Baloch women?

For Naela Quadri, it's as though she paved the way for many other young women to follow in her footsteps and enter Baloch politics. Quadri insists that for the nationalist movement in Balochistan to succeed, it must also bring about a change in gender relations in society.

"Most of the time for any other nation, it may be easier for women to go out, in other parts of the world, women go for shopping, for education, for jobs," says Quadri. "But in Baloch society it is tribal, where mobility for women is very strict. Here this grand involvement of women in nationalist movement in freedom movement means a lot. It means many chains of patriarchy, breaking many chains of slavery. It's not just slavery from Pakistan. Slavery from the patriarchal chains also."

That may be the case, but protester Zarina Baloch says her involvement is fundamentally an existential question.

"Some of my family, they scared," she says. "They say, 'Hey a girl what are you going to do?' I say I have to do. 'Why you are stopping me?' I say to my families. If you will stop me, next is yours. I say this is the good things. I have to do something for my family. I have to do something for my father for my brother. If today I will not do then tomorrow the time will come that I will be killed by Pakistan. I will weep that what did I do in my whole life."