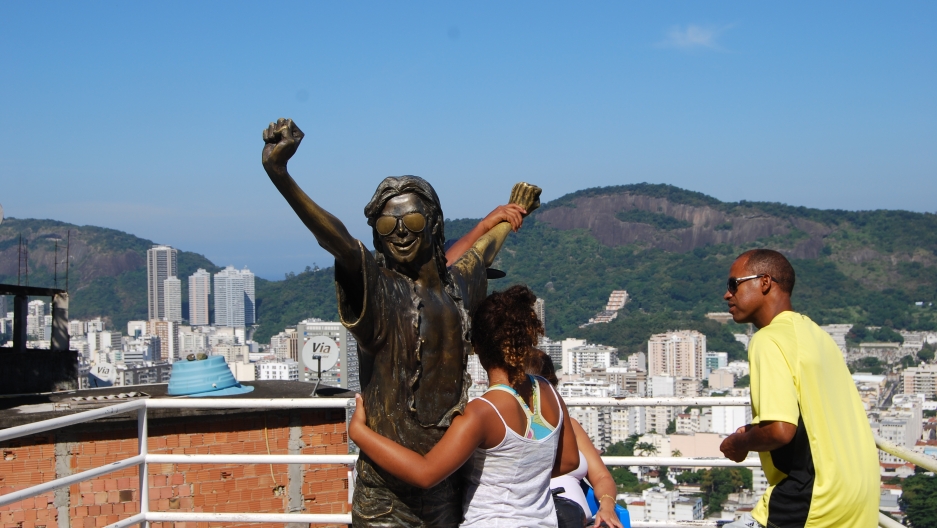 Share
For Tuesday's Geo Quiz, we're searching for the King of Pop. Actually, we're looking for a statue of Michael Jackson that sits outside of a soccer stadium in England. The owner of the stadium, and of the Premier League team that plays in it, commissioned the statue after Jackson's death in 2009. But that owner recently sold team, stadium, and statue to a new owner, who happens to already own the NFL's Jacksonville Jaguars. Some fans of the soccer team in England never liked the Jackson statue. And they want the new guy to get rid of it. What's a new owner to do? Can you tell us where the statue stands? The answer is: London. Mohamed Al Fayed, owner of the English Premier League team Fulham, finalized the sale of his soccer club this week. For some fans, it's finally a chance to get rid of the statue. But outgoing owner Al Fayed has threatened to shave off the new owner's mustache if his beloved statue is removed. This, of course, isn't the only Michael Jackson statue in the world. For Tuesday's Geo Quiz answer, we'll also accept other statue locations of Jackson. Where have you come across one? Share your Michael Jackson statue photo by clicking the "upload images" button in the comments below. I stumbled across one recently in Rio de Janeiro in the favela of Santa Marta. Jackson's arms are outstretched in triumph as he looks over the city. Jackson filmed part of the music video for the song "They Don't Care about us" in the favela, dancing among the locals in 1995. Parts of the video were also shot in the northern Brazilian city, Salvador. At the time, Santa Marta was a very poor, dangerous place with a lot drug problems and gun violence. Brazilian authorities allegedly didn't want Jackson filming there, showing the world many of the problems in Brazil. But Jackson did it. And Spike Lee filmed the video. The statue of Jackson in San Marta was dedicated in 2010, not long after Jackson's death. Today, many tourists, as well as locals, come to Santa Marta to see the statue, as well as the stunning views the location affords of Rio. The Rio Times wrote about Jackson visit to Santa Marta, many years later. The event assumed huge significance for the community, as José Mario Hilario dos Santos, president of the Santa Marta residents association, explained; "There are a lot of fans in the community. Everyone loves Michael Jackson and you could always hear his music here. He could have chosen any of the communities and it means a lot that he came here." Santa Marta is a perfect spot to see the beaches of Rio below, and the Christ The Redeemer statue in the distance. There's also a little kiosk nearby where you can buy a Michael Jackson or Brazilian souvenir. To my pleasant surprise, I didn't find the statue cheesy or overly touristy. It's great to visit a favela like Santa Marta to see how Rio's poor live in the city's many hillside slums. There's also a cool tram that travels up the steep hillside and takes you up to the level of the platform and statue. Santa Marta was also the first favela in Rio to be "pacified" by the state police, back in 2008, and a police presence remains, so it should be safe to visit as well. (But double-check with a local first.) The favela is one of Rio's model successes for a cleaned up favela with widened streets, installed staircases, and things like regular garbage collection. And, drug violence there seems to be largely a thing of the past. So if you ever find yourself in Rio, Michael Jackson fan or not, I'd highly recommend a visit to the statue of the King of Pop. And if you want to see some beautiful, colorful shots of urban Brazil without getting on a plane, watch the video.