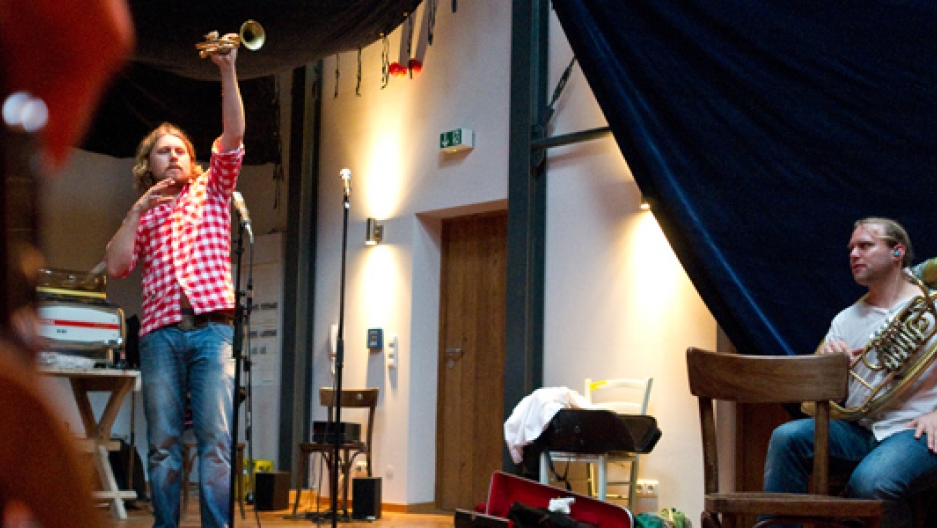 Share
Manuel da Coll plays drums for LaBrassBanda. "Actually it's sort of stupid, if you want to be successful in Germany, to choose a Bavarian style for your show act," he says. The band formed six years ago in rural southern Bavaria, land of dairy farms and political conservatism. But he says that traditional image isn't the whole picture. "There's like the same image problem maybe with Texas, because they had Bush of course, he came from there, but they also have, like, South by Southwest, I don't know," da Coll says. "There's something happening also in these parts of your country, and the same in Bavaria." One of the things happening in Bavaria is LaBrassBanda. They're rising stars in Germany, selling out shows all over Europe, and touring as far as Siberia and LA. They were the runners-up in Germany's national song contest this year, and they've become media darlings — despite or perhaps because of their Bavarian image. The band plays brass music barefoot, in lederhosen and t-shirts, and they've been known to perform aboard a tractor. "We're on stage in lederhosen and all this like Bavarian cliché things, and the people are sort of set up actually at the beginning of the concerts most of the shows they are just like, heh? what are these guys doing? It's not like Bavaria's very popular in Germany," he says. If Germans are a little confused, it's not surprising. LaBrassBanda's lyrics are in Bavarian, a regional dialect most Germans don't understand. "There are some people who complain about not understanding the music of course. But the effect of the concert is more the dancing thing than the listening thing," says Andreas Hofmeir, the band's tuba player. He's actually a professor of tuba, at an arts college called the Mozarteum, as in Mozart. "The oompah music, well, it was very very uncool for a long time," Hofmeir says. Most of the band started off playing as kids in Bavaria's traditional small-town brass bands, then went on to train in classical and jazz. They got together when they started tooting their trumpets and tubas in clubs, alongside DJs playing Balkan brass. "And then we established our own style, like a little bit of this Bavarian note to it, on tracks like "Autobahn," which is obviously an oompah tuba feeling to it like da-da-da-da, you could say that's typically Bavarian," Manuel da Coll says. The band has played its Bavarian roots for musical inspiration, and for novelty. But Manuel da Coll says their music shows Germans a different side of Bavaria too. "You have to show the people around in Berlin not all people are like traditionalists in Bavaria, not all people vote for the conservative party, which is also a cliché for Bavaria," he says. Now, after six years of fighting stereotypes, LaBrassBanda may be moving beyond them. Andreas Hofmeir says Bavaria is where they come from, not where they're going. "Because our music is not a Bavarian music, it's an international music with maybe Bavarian roots, like we see ourselves. We are like international people with Bavarian roots," Hofmeir says. The title of the band's first album was a Bavarian expression, Habediehre, meaning "nice to meet you." The title of the second was the name of a small Bavarian town. But LaBrassBanda's new album, released last month, is called "Europa." As you might have guessed, that's the German word for Europe.