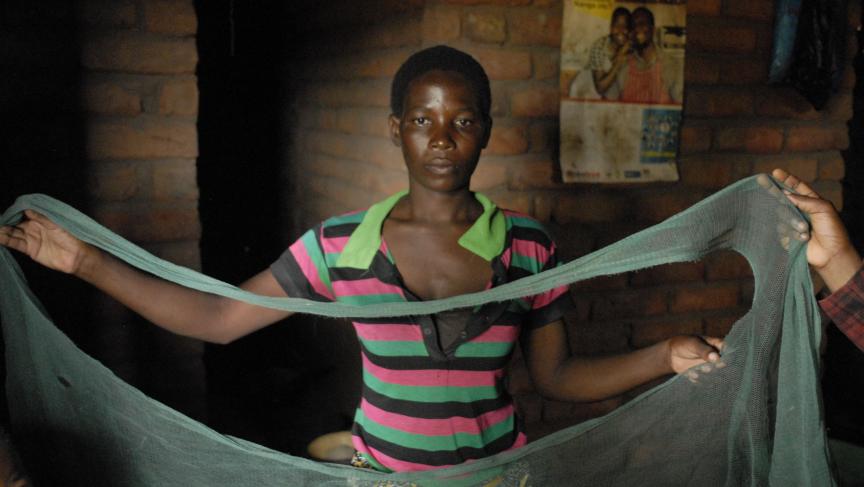 Dorothy Kalema holds up her bed net with large holes.

You can see the grip malaria has over parts of Africa when you visit a village like Chikwawa, in southern Malawi.

Look just beyond the brick huts and goats, and you see a big lake. It is filled with fish – a source of food for the residents here – but it is also a breeding ground for mosquitoes that spread disease.

When I visited, some mothers and children gathered in the shade, waiting to speak to me. Among them was a 10-year-old girl lying on a mat, listless.

“This child is suffering from malaria right now,” said the girl’s mother, Dorothy Kalema. “She just started getting sick yesterday.”

Kalema said she knew her daughter had malaria from her fever, vomiting, and lack of energy.

I asked Kalema how long it had been since her daughter had last been sick with malaria. The answer: just one month.

“My child had malaria last month, too,” another woman said.

“I have malaria right now,” commented a third.

Malaria is incredibly common here, despite a multibillion-dollar effort that has drastically reduced the incidence in other parts of Africa. The fight has largely centered on battling the mosquitoes that transmit the illness.

There have been campaigns to kill baby mosquitoes with larvicide. Other campaigns have focused on killing adult mosquitoes by spraying insecticides on the walls of homes.

Perhaps the best-known campaign has focused on bed nets. These nets, which contain insecticides within their fabric, are meant to protect families when they are sleeping and most prone to being bitten. Governments and charities have distributed hundreds of millions of bed nets across Africa.

About a decade ago, when insecticide-treated nets were first rolled out in a big way, some influential people considered them a game changer. At a gathering of world leaders in 2008, British Prime Minister Gordon Brown and UN Secretary General Ban Ki-Moon said bed nets would play a big role in helping to bring down malaria deaths to nearly zero by 2015.

Janet Hemingway, a preeminent malaria researcher and director of the Liverpool School of Tropical Medicine in the UK, was not convinced that things would go so smoothly.

“A number of us were worried that it was too simplistic a story right at the beginning,” she says.

What worried Hemingway from the outset of the bed net campaign was that the hundreds of millions of nets distributed across Africa were all treated with the same class of insecticides, called pyrethroids.

Hemingway says there was no way those nets could ever be a long-term solution, because mosquitoes will become resistant to whatever pesticide you throw at them; that is, they will evolve so the pesticide no longer works. And resistance is likely to emerge more quickly if you blanket an area with bed nets that all contain the same insecticide.

“People almost didn’t believe that resistance was going to be an issue,” she recalls. “I for one had been going around for many years saying, ‘Guys, you’re going to get this problem.’”

It turns out that Hemingway was right.

At Malawi’s Malaria Alert Center, researcher Themba Mzilahowa tests mosquitoes for resistance by collecting them in a tube, exposing them to insecticides, and checking back later to see how the insects fared.

Mzilahowa says as recently as three years ago, nearly every mosquito he tested in this way would be killed by pyrethroids. Today, it is a very different story.

“We’re seeing failure of the chemical to knock down the mosquitoes,” he says.

And this problem has turned up well beyond Malawi. According to a recent World Health Organization report, mosquitoes are showing widespread resistance to pyrethroids across Africa. The WHO called several nations – including Cameroon, Ethiopia, and Uganda – areas of “critical concern.”

Of course, if the insecticide in a bed net stops working, the net itself should still offer some protection to the person sleeping beneath it. But that is only true if the net remains intact.

Back in the village of Chikwawa, I asked Dorothy Kalema – whose daughter had malaria twice in one month – to show me the net her family sleeps under.

“This is the big hole where the mosquitoes enter,” she said.

There were three large holes in the net, big enough to put your head through. Many of Kalema’s neighbors showed me their nets, and they too were riddled with holes.

In many parts of Africa, bed nets that were supposed to hold up for years have too quickly ended up in tatters. Perhaps the nets were poorly manufactured, or people who use the nets have not taken proper care of them.

No matter the reasons why so many nets have holes in them, they will obviously need to be replaced. But malaria researcher Janet Hemingway says if you give people the same kind of nets you gave them a couple of years ago, the benefit won’t last long in places with pyrethroid resistance.

“Distributing nets into pyrethroid-resistant areas, where those nets are going to [develop holes] quite quickly, is going to give you very little protection quite quickly,” she says.

And she says that, from the outset, the nets should have contained not one insecticide but two, because that would have prevented the mosquitoes from growing resistant so quickly.

But Richard Feachem, former director of the Global Fund to Fight AIDS, Tuberculosis and Malaria, says that was not an option when the bed net campaign was launched. “There was only one insecticide that was approved for use with such close human contact,” he explains.

The Global Fund is one of the world’s leading funders of insecticide-treated nets and paid for tens of millions of them during Feachem’s tenure.

Feachem says he knew that mosquitoes would become resistant to the insecticide on those nets. Even so, he makes no apologies for funding the distribution of millions of bed nets with just one insecticide on them – because children desperately needed them.

“I don’t think it’s ethical to stand back and withhold a known, effective intervention when the withholding will cause people to die,” Feachem says. He adds that, at the time, the emergence of insecticide resistance was a “probable but still hypothetical negative consequence” of a universal bed net campaign.

For her part, Janet Hemingway does not contend that the nets should have been withheld, and she agrees with other health experts that bed nets remain a crucial part of malaria control in Africa. But Hemingway does argue that those behind the bed net campaign should have made a bigger push – early on – to develop new insecticides. 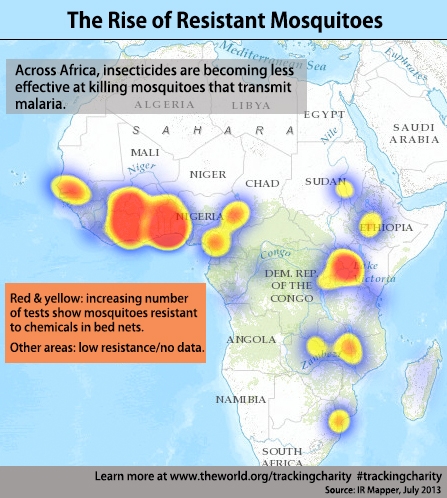 Hemingway says research should have been as big a priority as distributing the nets, because trying to develop new insecticides now, when resistance is already spreading, is a dangerous gamble.

“The last thing any of us want is to find that we’ve got a catastrophic failure of these nets, and suddenly all the gains that we’ve got in terms of reducing malaria transmission are being lost,” she says. “Because you will see that in terms of young kids dying.”

The World Health Organization predicts that if the insecticides on bed nets continue to fail, an additional 120,000 African children will die from malaria each year.

Hemingway is one of several experts now working to develop new insecticides – ones that are safe enough for bed nets and powerful enough to kill resistant mosquitoes. But she and other scientists say they probably will not have a new product ready for another four or five years.

Meanwhile, in the village of Chikwawa, families continue to put their trust in the nets they have been given.

In a ward filled with sick children at the district hospital, I met Alice Sekani. She was hovering over her one-year-old daughter, who lay on a cot, comatose. Sekani said her daughter had been diagnosed with cerebral malaria. It could be fatal.

This was not the first time the young girl had developed malaria, in just her first year of life. And yet, her mother told me, the family sleeps under a bed net every night.

This story is part of a special investigative project, Tracking Charity.