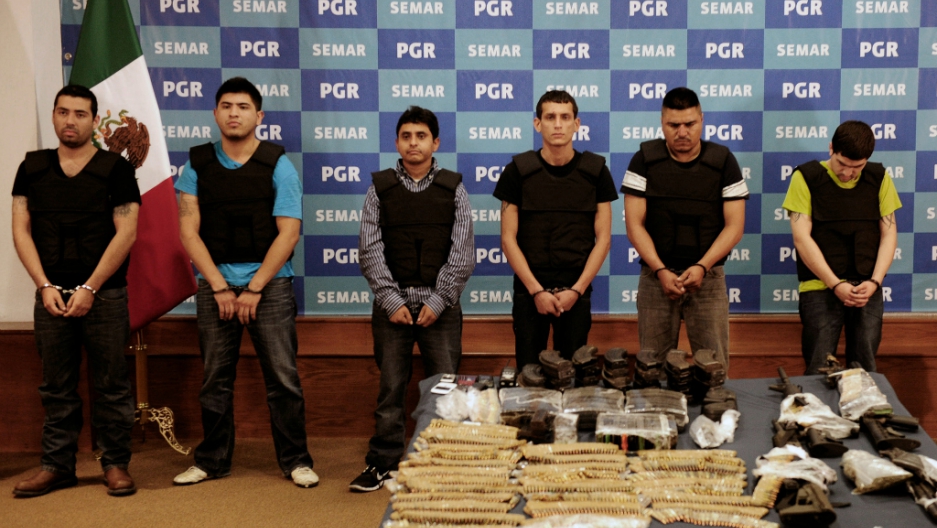 Salvador Alfonso Martinez, aka "Ardilla", (3rd-L), alleged member of the Los Zetas Cartel and alleged mastermind of the San Fernando slaugther, is presented with accomplices to the media at the General Attorney's offices in Mexico City, on October 8, 2012.
Credit: ALFREDO ESTRELLA
Share

Los Zetas, the notorious Mexican drug cartel, is known for committing some of the most brutal crimes in Latin America. The group originated in the 1990s when members of a Mexican special forces unit, assigned to combat the Gulf Cartel, defected to serve as enforcers for the Gulf Cartel’s criminal organization.

In 2010, Los Zetas split from the Gulf Cartel, sparking one the most violent periods in Mexico’s drug war. Fighting for supremacy with rival gangs — including the Gulf Cartel and the Sinaloa gang — Los Zetas became responsible for turning much of Mexico into a battleground.

The gang’s turf wars have extended from the Texas border to Guatemala and Colombia, while targeted advertising campaigns fill its ranks with a steady flow of ex-military recruits. The cartel once had the audacity to openly challenge both the US and Mexican governments in all-out warfare, but continuous pressure from government forces and rival gangs has left the organization embattled. Los Zetas’ operations, which are often subcontracted to local crime syndicates, include drug smuggling, kidnapping and illegally syphoning oil from pipelines.

Though the recent capture of its leader, Miguel Angel Trevino, could prove to be a severe blow, Los Zetas remains deeply entrenched throughout Mexico. Here are six of the most nefarious crimes carried out by the cartel.

The Mexican military found a mass grave with the bodies of 72 undocumented immigrants. Zetas reportedly intercepted and killed the migrants because they feared they were going to be recruited by a rival gang, the Gulf Cartel.

Zetas intercepted several buses headed toward two border towns, kidnapping many on board. They then executed an estimated 193 people on a ranch near San Fernando in April 2011. Zetas carried out the killings suspecting they might have been recruits for the rival Gulf Cartel.

In August 2011, armed men affiliated with the Zetas cartel set fire to a casino in the Mexican city of Monterrey, killing 52 people. It was one of the deadliest attacks ever on Mexican civilians during the drug war.

Zetas led a prison riot in February 2012 resulting in the death of 44 inmates. The chaos allowed for the escape of 30 gang members.

Less than a year after the deadly casino arson attack, Monterrey once again experienced the horrors of Los Zetas drug violence. Forty-nine decapitated bodies were found dumped on a highway outside the city in what police believe is related to clashes between the Zetas and rival Sinaloa cartel.

More than 1.8 million barrels of crude oil are stolen from Mexico's state-run petroleum company PEMEX every year by groups like the Zetas, often resulting in violent clashes. Several blasts at PEMEX sites that resulted in hundreds of deaths aroused suspicion they were linked to the Zetas.