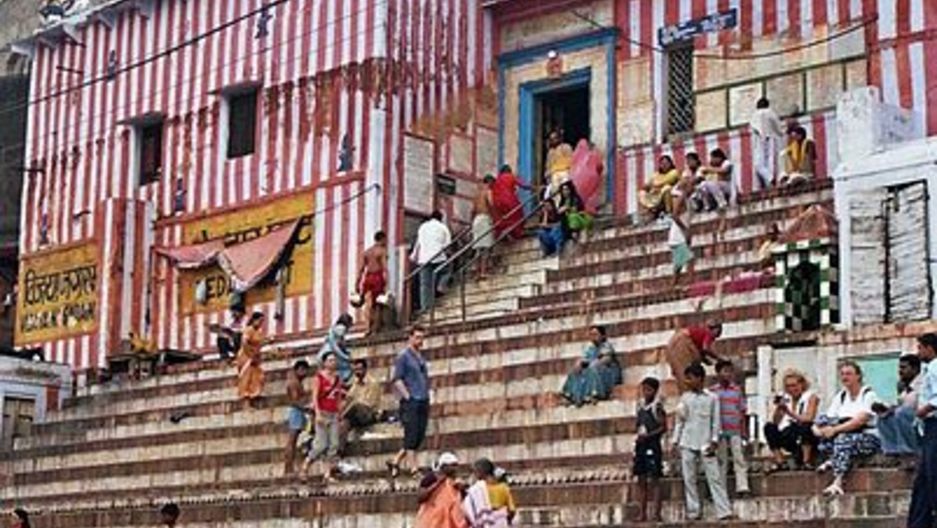 Varanasi is one of the most holy sites in India, but the Ganges River, the center piece of the holy site, has become extremely polluted. (Photo by Airunp via Wikimedia Commons.)

The Ganges is a holy river, especially for the one billion Hindus who live in India. But the combination of pollution and cremation rituals have led to an environment that can feel far from hallowed.

He visited Varanasi, which is, of all the sacred places in India, perhaps the most sacred and revered. Varanasi, Hindus believe, is where the universe was created by the god, Vishnu, and where he left the imprint of his sandals in the ground during the creation.

It’s the most sacred spot in the whole country. And the idea is if you are cremated there, you actually break the cycle of reincarnation, Black said.

"Hindus believe you’re endlessly reincarnated as one form of life or another — depending on the nature of your deeds while you were alive," he said. "You can be anything from an elephant to a cockroach, depending on your stored up good deeds."

The idea is, he said, if you die there and your ashes are scattered on the holy river, the Ganges, then you go to heaven, join your ancestors, and be released from the pains of reincarnation and rebirth.

The irony is, these deaths and funeral pyres have turned the Ganges into one of the most polluted rivers in the world.

"In terms of bacteriological contamination, it is literally thousands of times worse in coliform bacteria than World Health Organization standards, but it’s not just that," Black said. "There are a string (of) major cities that dump their raw sewage; their tannery effluent (directly into the river). ... By the time you get to Varanasi and you add that city’s quotient of the effluent, you’re really dealing with something that smells bad, it looks bad, you have dead animals floating in it."

Basically, Black says, the Ganges River, the most holy river in the Hindu religion, has been turned into an open sewer not 50 yards upstream of the reincarnation grounds.

"But if you’re a Hindu, you have a different conception of pollution that is not irreconcilable, which is a notion of purity," Black said. "The river is a goddess, the goddess Ganga, and by immersion in it ... they regard that as a purifying thing. They may get sick afterwards — a lot of them do."

But the water is not the only pollution. The ritual cremation requires wood and, for wealth families, it can be up to 1,000 pounds of wood, which leads to additional pollution.

In addition, merely harvesting the wood can be controversial, with illegal logging fueling bribes and under-the-table payments in order to harvest enough wood to fuel these fires.

"People who are concerned about the environmental costs of this, and are trying to challenge the really fundamental tenets of a great religion, what they come up against, is how do you reduce the amount of wood without going to a western style closed cremation system, which has been largely rejected in India," Black said.

There is a group in New Delhi, he added, that has created a perforated metal box to use in these cremations but still preserve the Hindu traditions. The box requires just 200 or 300 pounds of wood for use.

But just such a system threatens to upend the system of bribes and payments that has built up around the cremation — big business for many people.

"I went to one cremation ground in New Delhi where the priest was actually selling the wood. So obviously you’ve got an incentive to sell more," Black said.