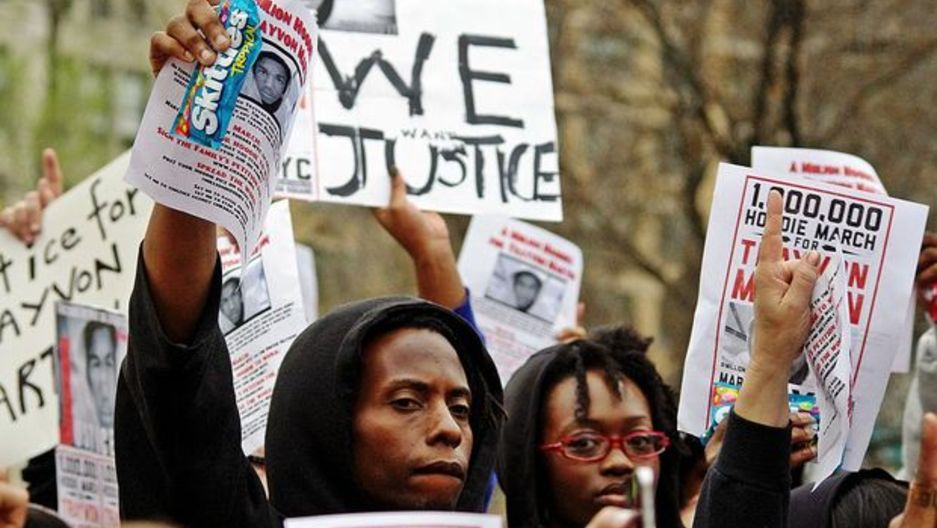 A large group of protesters gather in March 2012 for the Million Hoodies Union Square protest. (Photo by David Shankbone via Wikimedia Commons.)

George Zimmerman, the Sanford, Fla., neighborhood watch volunteer who shot and killed 17-year old Trayvon Martin, was acquitted over the weekend -- igniting a firestorm of debate and a handful of protests as well.

The decision sparked outrage from many who rejected Zimmerman's claim he acted in self-defense. Instead, they argue, Zimmerman used racial profiling and fired his gun because Martin was a black teenager.

Thousands showed up in different parts of the country to protest the ruling. In New York, a group of peaceful protestors stopped traffic as they marched through midtown Manhattan. In Oakland, the crowd of protestors was smaller but more violent, starting small fires, smashing windows and burning a United States flag in front of a McDonalds.

Within 12 hours, Twitter users had made more than one million tweets about the verdict.

Family members, including Martin's father Tracy and Zimmerman's brother, on both sides of the case also took to Twitter to share their feelings about the ruling by the six-person, all-woman jury.

Message from Dad: "Our whole family is relieved". Today... I'm proud to be an American. God Bless America! Thank you for your prayers!

President Barack Obama, who said, "If I had a son, he'd look like Trayvon Martin" shortly after the incident, called Martin's death a tragedy.

"Not just for his family, or for any one community, but for America. I know this case has elicited strong passions," President Obama said in a statement. "And in the wake of the verdict, I know those passions may be running even higher. But we are a nation of laws, and a jury has spoken.”

The trial and its controversial verdict have started conversation and debate about race relations, gun laws and self-defense laws.

The idea that the United States is post-racial, that race isn't a factor in people's interactions, is dangerous and contributed to Zimmerman's acquittal, said Sherrilyn Ifill, President of the NAACP Legal Defense and Education Fund.

"I don't think its our legal system that interferes with juries ability to hear the facts. I think it is the pervasive view among too many in this country, including those who operate in the legal system, judges and lawyers alike, that if we simply ignore race we will believe that we have overcome race," Ifill said. "And we have to become more mature. We have to be willing to engage honestly about race in this country."

Others felt that the verdict was in large part a result of weak prosecution.

"So many folks are trying to put this in racial terms when the fact of the matter is, the prosecution did not live up to their burden to prove beyond a reasonable doubt the guilt or the innocence of the defendant," said Ron Christie, a Republican strategist.

For the prosecution to find Zimmerman guilty, they were faced with the difficult task of proving he acted with ill-will, hatred, spite or evil intent — the requirements for a second-degree murder conviction.

“We charged what we had based on the facts of the case,” said prosecutor Angele Corey, an assistant attorney general. “We truly believe the mind-set of George Zimmerman and the reason he was doing what he did fit the bill for second-degree murder.”

Though Zimmerman was found not guilty by the jury, the larger jury of American opinion is still out. Benjamin Crump, one of the Martin family's lawyers, said they are considering whether to bring a civil suit against Zimmerman, outside of Sanford. The Justice Department reiterated a March 31 statement saying it was "investigating the facts" surrounding the case and would take action if it found cause.

The incident has also triggered discussion at a family level, especially in black families who question how safe they are if men like Zimmerman are being protected by the legal system.

"It's a tough line to walk to not being cynical and bitter and afraid and trying to imbue in this young black male that you take the world with confidence and be proud in who you are," said Christy Oglesby, quality assurance manager for CNN and mother of a 13-year-old son.