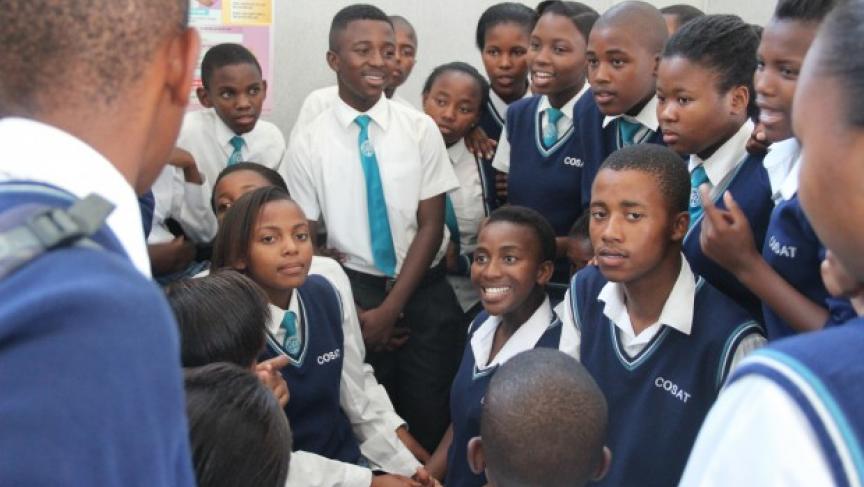 At COSAT, most classes have around 25 students. Classes at other public schools are often far more crowded.

During apartheid, black South Africans received a vastly inferior education. They were essentially trained for lives of subservience in schools that were overcrowded, underfunded, and falling apart.

Today, the country’s education system is still reeling from the legacy of apartheid. Public schools – particularly in urban townships and rural areas – suffer from a range of crippling problems: little infrastructure, untrained teachers, inadequate resources, and corruption. Nationally, academic achievement is barely better now than it was during apartheid. In some areas, it’s worse.

A growing number of education organizations have begun questioning the government’s ability – and commitment – to fixing the problem. But they’ve been unsure of what to focus on. With so many problems to solve, where should one begin?

Equal Education, a large and politically powerful non-profit organization, believes the answer is this: force the government to publish a set of “minimum norms and standards” for schools. In other words, the government must say what, specifically, every school in South Africa has to have – how many classrooms, how many toilets, teacher qualifications, and so on. Currently, there are no such binding regulations on the books.

Earlier this week, Equal Education held a meeting to explain its strategy.

“We don’t think this is the solution, but we think it’s a good place to start,” said Doron Isaacs, a co-founder of Equal Education.

His organization has been in a tug-of-war with the Minister of Education, Angie Motshekga, over this issue for several years. Under relentless political pressure, the minister promised to publish these norms – then reneged. She said she would instead publish a set of non-binding guidelines. Equal Education filed a lawsuit, and a court ruled that the minister must publish standards. If she doesn’t, her department will be in violation of children’s constitutional right to education.

Geoff Budlender, a lawyer representing Equal Education in the case, said that, in the absence of specific laws about school requirements, it’s impossible for courts to determine if a child’s rights are being violated.

“Having no toilets and no teachers for 800 kids is obviously a problem, but how many toilets, and how many teachers is enough?” Budlender said. “The courts do well with binary, yes-or-no questions, but they don’t do well with these ‘how many’ kinds of questions.”

He said that once the Ministry of Education lays out specific rules, the courts – and students themselves – will be able to determine when a student’s rights are being violated.

And the courts may suddenly become very busy.