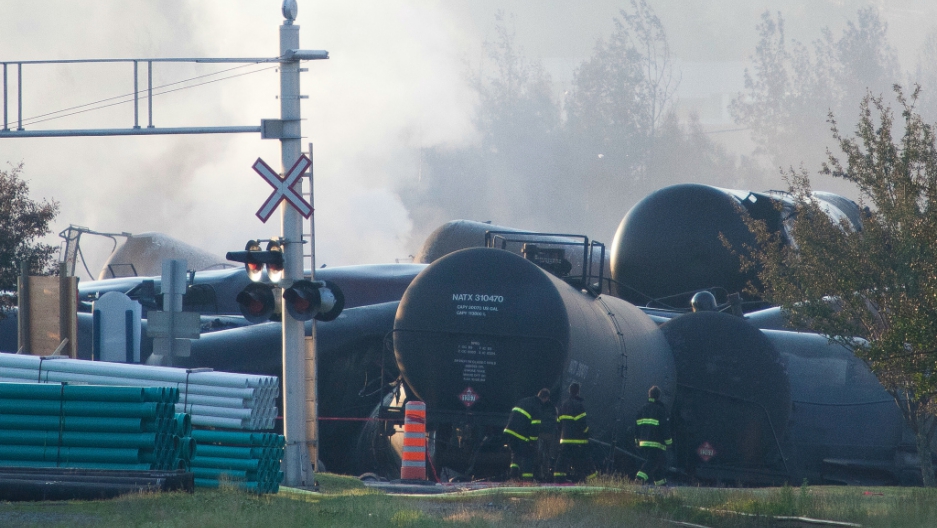 Firefighters inspect the wreckage on July 7, 2013 of a freight train loaded with oil that derailed the day before in Lac-Megantic in Canada's Quebec province, sparking explosions that engulfed about 30 buildings in a wall of fire.
Credit: AFP
Share

NEW YORK — As Canadian authorities pick through the devastated wreckage of the train that exploded and killed as many as 50 people last weekend, the wider debate over the safety of carrying explosive or other dangerous materials by rail has revived.

The train, carrying crude mined from the shale gas and tight oil fields of North Dakota’s Bakken formation, slipped its brakes, ran uncontrolled down a grade and derailed in the center of the scenic resort Quebec town of Lac-Megantic, igniting a huge explosion.

Investigators say a faulty braking system appears to be the cause of the disaster — the worst in Canada’s history.

While investigators gather clues, the disaster has been seized upon by both opponents and proponents of Bakken shale oil mining and Canada’s own oil tar sands — two regions rapidly ramping up production of oil using controversial extraction methods decried by environmentalists as a contributor to climate change and a threat to vital underwater aquifers.

But many, including President Barack Obama, have touted these new North American sources as a game-changing way to lessen US dependence on oil imported from the Middle East or Russia. Obama has been embroiled since the middle of his first term in the question of whether to approve construction of the Keystone pipeline that would move such oil to US markets.

The disaster has provided grist for both sides of the debate. Proponents charge that more such deaths will occur if Keystone continues to be mired in regulatory studies. Investor’s Business Daily cites statistics showing that US rail shipments of crude from North Dakota had increased 46 percent from June 2012 to June 2013.

“The Lac-Megantic derailment was a real environmental disaster, not an imaginary one,” IBD's editorial said. "Each tanker in the 72-car train was carrying 100 tons of crude oil, according to the Quebec Environment Ministry. And they could be coming to a town near you.”

Keystone is designed to carry 830,000 barrels of oil a day. RBC Capital Markets, the investment arm of the Royal Bank of Canada, estimates that without the pipeline, shipments of Canadian crude by rail to the US will increase by another 47 percent by 2017.

But opponents of Keystone and fracking (usually one and the same) see this as a red herring. They want the United States to stop importing Canadian tar sands oil because of the high carbon cost of producing it, and they want environmental regulations tightened to make hydraulic fracturing — the technology, known as fracking, behind the shale gas and tight oil extraction of the Bakken — effectively illegal.

Global Climate Action, an activist group in Montreal, argues oil needs to be phased out rather than “risk managed.”

“Whether it be by pipeline or rail, the only way to keep an event like the train accident in Lac-Megantic Quebec from happening again is to keep the oil in the ground,” the group said in a statement.

For the foreseeable future, however, oil — whether imported by tanker from the Persian Gulf, rail and tanker trucks from the Bakken, or by pipeline from the Gulf of Mexico — will remain a reality of the modern economy. And one thing almost everyone agrees: pipelines, whatever their dangers, are a good deal safer than rail transportation.

"The evidence is clear: transporting oil and natural gas by pipeline is safe,” says Diana Furchtgott Smith, a former Labor Department chief economist and a member of the Council of Economic Advisers under presidents Ronald Reagan and George H.W. Bush. “Furthermore, pipeline transportation is safer than transportation by road, rail, or barge, as measured by incidents, injuries, and fatalities — even though more road and rail incidents go unreported.”

The above chart is from a report by the Manhattan Institute for Policy Research.

As the rail versus pipeline debate continues, other aspects of train traffic may also get revisited.

In the months after the 9/11 attacks, as assault gun toting National Guardsmen patrolled transportation hubs and every day seemed to bring another terrorist threat alert from the federal government, the danger posed by the huge amount of chemicals and explosive materials that pass through American cities by rail was just one of many topics that got an airing.

Yet amid the heightened security imposed at airports, the locking of cockpit doors and new border and port security around the country, the urban rail issue got lost in the shuffle.

A few recent studies, like this one from Harvard’s Belfer Center on Science, Technology and Public Policy, have focused on what’s known as TIH risk — toxic inhalation hazards. Using the infamous release of methyl isocyanate from a Union Carbine plant in Bhopal, India, in 1984 as a baseline, experts worry that an accidental or deliberate act at a US-based plant could cause deaths in the tens of thousands.

The Bhopal disaster killed 3,800 people and left more than 11,000 injured, many blinded for life.

“Release of toxic inhalation hazards, whether the result of attack or accident, could result in devastating consequences,” the Belfer Center report says. “Many hazardous chemicals are transported over long distances by rail, during which they are particularly vulnerable.”

Since 9/11, the US Transportation Safety Administration (TSA) has regulated rail traffic in high-risk urban corridors. Most attention, however, has been devoted to patrolling urban mass transit, not cargo networks.

“The problem is that most people (including corporate decision makers) consider that an attack on TIH railcars a very unlikely scenario,” wrote Patrick Coyle, a US chemical manufacturing specialist who blogs on the topic. “The reason goes back to a familiar safety conundrum: if an accident hasn’t happened, it is [regarded as] unlikely.”

Michael Moran is an author and columnist for GlobalPost and vice president of global risk analysis at Control Risks, an international political and security risk consultancy.