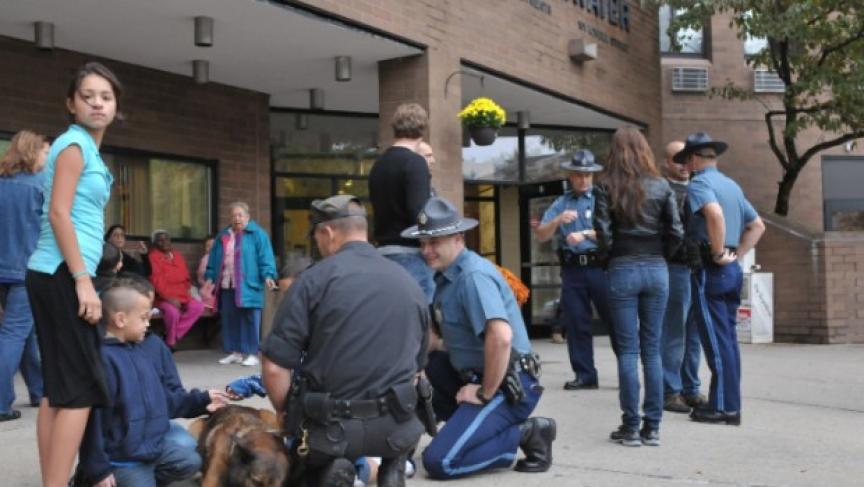 Several years ago, a Puerto Rican gang had a violent stranglehold on this largely Latino community. In one week there were three murders, including a gun battle in a hospital parking lot. It was like something out of a movie.

And Barbeiri said he was desperate. In large part because he couldn’t get people in the community to talk to him.

“I've worked in this neighborhood off and on in the heydays of community policing, as a gang intelligence officer, as a detective, in narcotics and I've never been able to foster any type of long term commitment in this neighborhood," he said. "I get one or two people that will talk to me but the majority of residents are afraid, inured or apathetic.”

Parker, a Harvard professor and army reservist, served two tours in Afghanistan. About three years ago he joined forces with other vets, who are also Massachusetts state troopers, and developed what they call “Counter Criminal Continuum” or C3 policing, a combination of aggressive arrests combined with equally aggressive community relations.

They used the north end of Springfield as their test case.

What happens, he said, is that gangs seek out and set up shop in failed communities. And local residents are paralyzed by fear and afraid to speak to police.

“I used to drive down the street — I used to get suspicious looks,” he said. “The change in their attitude ... I get people that wave to me, want to talk to me, say hello now. The joke is they wave at me with all their fingers not just one.”

Key to C3 policing is getting locals to buy into it. To do that, state troopers hold monthly meetings with community leaders modeled on the Shuras that soldiers and Marines held with village elders in Afghanistan.

As many as 25 local officials and activists show up. They discuss everything from ways to deter drag racing to dealing with kids who smoke pot in the hallways of housing developments. The leaders are people like Jose Claudio, the director of the New North Citizens Council, who is amazed at the relationship that’s grown between the community and the cops.

“And thank God that we have the good relationship with them and that really I think that it’s going to keep going,” Claudio said. “Lately, if you see our meetings it’s more focused on the community and the Springfield police doing a lot of the work."

What C3 does is get the local beat cops involved, in both the arrests and community relations. So when the C3 guys go away, the program continues.

Parker, ever the Harvard professor, wasn't content to accept anecdotal evidence that his program was working. So he brought in his students to measure what he calls “the efficacy of the work.”

They looked at lots of things, big and small: murders, graffiti, teen pregnancy — anything that might be changed by getting gangs off the streets. Parker says one of the most hopeful discoveries was that North End students were doing better in school.

“If you have a kid who lives in a rough, violent neighborhood,” Parker said, “they are the conduit to export this violence to other schools. And what we found is that kids in the North End were behaving better when they went to other schools."

The success of C3 policing in the North End has motivated local law enforcement to try it in other parts of the city. And the C3 creators have received dozens of requests from people across the country who want to start the program in their communities.

Parker knows how hard it is to turn a community around, whether it’s full of gangs or insurgents.