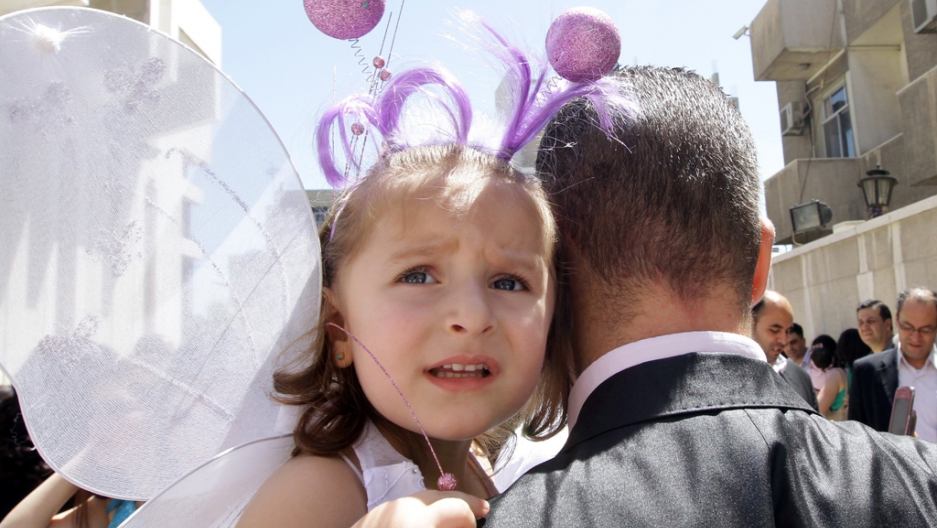 A young Syrian girl is in her father's arms during the Palm Sunday procession on April 28, 2013 in the Syrian capital in Damascus. On Palm Sunday Christians celebrate the triumphant return of Jesus Christ to Jerusalem when a cheering crowd greeted him waving palm leaves, a week before his crucifixion.
Credit: Louai Beshara
Share

BEIRUT, Lebanon — A Syrian rebel group took credit for setting off a bomb in a supermarket parking lot in a part of southern Beirut populated with Hezbollah supporters Tuesday. Fifty-three people were injured, according to Lebanese health officials. The bomb exploded several hundred yards from the offices of Hezbollah officials but wounded mainly civilians.

Syria's civil war has spilled over into Lebanon with greater intensity in the last few months. Hezbollah and its allies support the government of President Bashar al-Assad, while Sunni militias back the rebels. The war remains a political battle, but it has sharply increased religious and ethnic strife in both Syria and Lebanon.

While the war has increased animosity between Sunni and Shia, it has also devastated Syria's Christians, some of whom have now fled to Lebanon. Their story is rarely told.

Maryam, her husband and two children fled the fighting in Syria and arrived here in Lebanon with only one suitcase each. They left the war-torn city of Qusayr prior to its recapture by pro-government forces.

"Bullets were flying everywhere," Maryam told GlobalPost, asking that only her first name be used. "There were rockets. My children couldn't go to school."

The family suffered months of hardships, in part because they were Christians, according to Maryam. "The mosques announced they wanted to round up all the Christian men. The families became scared."

The family finally left after masked men came to their apartment intent on taking all the Christian men in the building. "We either had to run for our lives or join the fight," said Maryam, who is Roman Catholic.

The family fled to Zahle, a predominantly Christian city in the eastern mountains of Lebanon.

Their masked antagonists weren't the infamous thugs of Assad. Nor were they fighters from other countries intent on waging jihad.

They were local, anti-Assad rebels intent on purging Qusayr of pro-Assad Christians. The city had become a major battleground, with religion as a defining factor.

Maryam is among the thousands of Syrian Christians who have fled the fighting but received little international attention.

The Most Reverend Archbishop Issam Darwish, a Melkite Catholic whose archdiocese includes Zahle, said Syrians have lived in peace for generations. He blames the anti-Christian violence on extremist groups such as Al Nusra and other jihadists.

"They believe Syria is a Muslim country, and the Christians must leave," he said. "But most Syrians are not like that."

Christians in Syria trace their history back to the days of St. Paul. Damascus became a major center of Christianity during Roman times. Islam became the dominant religion under Arab and later Ottoman empires, but Christians generally lived peacefully with their Muslim neighbors.

When the French occupied Syria and Lebanon after World War I, they implemented a divide-and-conquer strategy that favored some Christian sects. Many Syrian Christians achieved higher incomes and educational levels than their Muslim counterparts, differences that persist today. Christians also participated in the anti-colonial struggle and helped found the nationalist Baath Party in the 1940s.

Today Christians make up about 10 percent of Syria's 22.5 million people, and include a variety of Orthodox and Catholic denominations.

In 1970 Hafez al-Assad, Bashar's father, came to power in a military coup. His family was Alawite, a mostly secular-minded minority that split off from Shia Islam centuries ago. The Assads established a brutal, but secular, dictatorship. Some Christians rose to positions of power in business, government and the military.

When the Syrian uprising broke out in March 2011, Christians remained neutral or sided with Assad. They saw that Muslim extremists - both Shia and Sunni - had driven Christians out of Iraq after the US invasion of 2003. They feared a similar crisis in Syria.

Even in the early months of the uprising, some local Sunnis were chanting the slogan, "Christians to Beirut, Alawites to the tabout [coffin].”

"We heard that slogan," said Joseph, Maryam's husband. "The rebels say, 'we never said that.' But if you look, it's true. Where are the Christians? They are here in Lebanon."

According to UN statistics, some Christians have left but in far fewer numbers than their Sunni Muslim counterparts. Less than 1 percent of Lebanon's 560,000 Syrian refugees are Christians, according to Dana Sleiman, spokesperson for the Beirut office of the UN High Commissioner for Refugees (UNHCR). Overall, some 1.5 million Syrians have fled their country.

While fewer Christians are displaced, refugees say their fears are real. For example, Christians are more often the target of kidnap-for-ransom crimes because they are perceived to be more wealthy.

"Most of the kidnappings are against Christians in our village," said Samara, a woman who fled a religiously mixed area in the northern Kurdish region of Syria. She got along fine with Kurdish neighbors, but feared the influx of jihadists in the Sunni Muslim community.

She and her husband Jamal owned a small business. "I wanted to go to work, But there were men in the streets with masked faces. I was scared." They left when their teenage son was repeatedly threatened with abduction.

The couple didn't know if the kidnappers were jihadists or just criminals taking advantage of the chaos. And, they said, the Assad government offered no protection. "The police are useless," she said. "They never leave the police station."

Samara and Jamal are now sharing a two-room flat with six relatives who had fled to Zahle months before. They came to Lebanon seeking safety among this country's Christian minority.

Local churches in Zahle were slow to respond to the refugee influx, even a year after the uprising began. Eventually, however, local churches set up refugee programs in conjunction with the Catholic charity Caritas.

"The Lebanese Christians also passed through difficult times during their civil war and they know what we're going through," the refugee Joseph said.

Archbishop Darwish said the Zahle parish now serves 720 Syrian families, providing subsidies for food, medical care and a portion of their rent. However, only 5-10 families have registered with the UNHCR, the United Nations agency far better equipped to handle the refugee influx.

Some Syrian Christians don't register because they are proud and don't want to accept charity, he said. Others have brothers and husbands fighting with the Assad armed forces and fear that refugee registration lists might eventually find their way to the rebels.

"At the beginning we thought the UNHCR was attached to an anti-Assad political party," said Joseph. "We were afraid to sign up." Joseph and Maryam did eventually register with the UNHCR after church officials convinced them of UNHCR's neutrality.

The fear of Muslim opposition groups is widespread among Christians, who see themselves under attack throughout the region. The secular dictatorships of Iraq and Syria, which protected Christians to some extent, no longer exist. Many Christians feel they have a choice between settling in Lebanon or following their forbears to immigrate abroad.

"We are afraid," said Archbishop Darwish. He blames the US for trying to take advantage of the Arab Spring to bring the region under its control. He said the US supports various Muslim rebels without thinking through the long-term impact.

"The US has no concern about minorities," he said. "They have their plan, and it's not for Christians. It's not for democracy."

Darwish expresses support for Assad as a force against US hegemony. In an open letter to President Obama, Darwish wrote about Assad, "He is a liberal, cultured personality, and he symbolizes confidence and safety to Syrian minorities, especially Christians."

Such views outrage other Lebanese Christians. Bassem Shabb, a Lebanese Protestant Member of Parliament for the Future Movement, said that supporting dictators has caused tremendous problems for Christians in the region.

The Future Movement, the party headed by Saad Hariri, has strongly opposed Assad and his Lebanese ally Hezbollah.

Shabb noted that Christians in Iraq largely sided with Saddam Hussein. "Now the Christians in Syria may be repeating the same mistake," he said. "For the Catholics and Maronites in Aleppo [Syria] to openly support the regime is suicide."

Elie El-Hindy, chair of the Political Science Department at Notre Dame University outside Beirut, agreed that Christians have been unwise to side with secular dictators against the Muslim majority.

"The more they take sides or engage in alliances, the more they will be threatened," he said. "One party is going to win; another will lose."

Rather than lament the attacks on Christians around the region, he urged Christians to take a broader view about the rise of Muslim political parties and governments.

"We should believe that democracy and human rights will adjust the situation in the long term," he said. He noted that Egypt's President Mohammad Morsi was overthrown, and non-Islamic movements have been attacking Turkey's President Recep Erdogan.

Christians and their allies might lose elections initially, he said. "We should work on winning the next one."

Of course, that assumes that the winner in Syria allows free and fair elections. Rev. Simon Faddul, president of Caritas in Lebanon, said if the war goes on too much longer, Christian refugees "won't have a home to return to."

He noted that Christians have confronted major crisis many times before, including the fratricidal Lebanese civil war of 1975-90.

Christians play a major political, social and economic role, he said. "So many domains of life, like banks and tourism, are well maintained by Christians. We shouldn't squeeze ourselves in a corner and hide under the complex of persecution or inferiority."

Prof. El-Hindy agreed, expressing optimism about the continued Christian contributions to the region.

"Christians are a factor for enlightenment and moderation," he said. "This is the way to fight the threat of extremism."