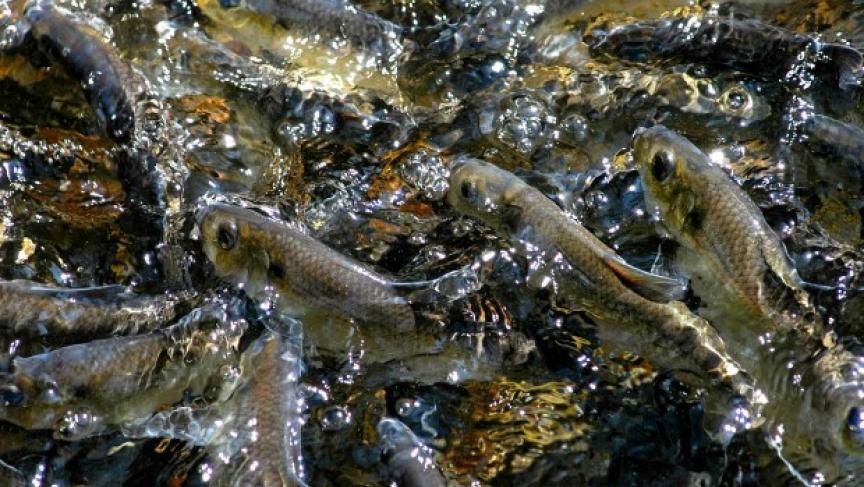 Alewives, or river herring, gather en masse in a Maine River. The fish are beginning to return this year to the St. Croix River system, on the Maine-New Brunswick border, after having been largely shut out since the 1990′s. (Photo by Dave Sherwood.)

The silvery, foot-long river herring are arriving by the thousands from the Bay of Fundy, a few miles downriver.

It’s a rite of spring here, but Sochasky says this year is different. Gates that had blocked a fishway upriver for more than two decades are now wide open, and alewives are free to return home to their ancestral spawning grounds.

“We’re expecting a big run this coming week,” Sochasky said. “This is the gateway to the St. Croix. From here, they’ll swim up to spawn for the first time in 23 years through the Grand Falls fishway to the upper lakes and flowages on the St. Croix.”

This fishway is in Canada, but the other side of the river is Maine. In most cases, political boundaries don’t mean much to free-swimming ocean fish. But alewives are anadromous, which means they live mostly at sea but spawn in rivers.

And Sochasky says this is an unusual river.

“The St. Croix is an international river,” she says, “the boundary between the United States and Canada. These fish don’t think of themselves as American or Canadian. And we have to manage them on an international basis also.”

Until recently, politicians in Maine disagreed. In 1995, a group of fishing guides convinced legislators there that alewives were outcompeting smallmouth bass, a fish popular with tourists in the St. Croix’s headwater lakes. The guides claimed the lucrative bass fishing economy was on the brink of collapse. So Maine passed a law that closed the fish ladder at Grand Falls Dam, 19 miles upstream from here.

“That was a unilateral decision’ Sochasky said. “The state did not consult with either the U.S. federal government or the Canadians on that.”

Just like that, alewives were shut out of 98 percent of their spawning habitat, and the population plummeted from nearly three million fish to just 900.

But there’s a twist to this story. The alewives were here first.

“Bass are actually the invasive species,” said Theo Willis, an ecologist with the University of Southern Maine. “Or we’ll say ‘naturalized,’ because they’ve been in the state for about 150 years.”

It didn’t take long for Willis to realize the science didn’t mesh with the politics. His research showed that introduced bass and native alewives seemed to be getting along just fine. And in the years since the alewives were shut out, scientists realized that the St. Croix was just the start of their troubles.

“The landscape for alewives has changed,” Willis said. “They’re now being considered for endangered species act listing throughout their east coast range. That’s a really big deal. In a lot of ways that’s a game changer.”

But science wasn’t alone in coming to the alewives’ defense. So did the Passamaquoddy Indian tribe, which depended on alewives for survival long before the river became the border.

Canadian Passamaquoddy chief Hugh Akagi, based in St. Andrews, New Brunswick, says his people call the alewife “the fish that feeds all. That’s one of the main reasons we’ve been here as a people for the past 13,000 years.

“Let’s give the little fellow credit,” he said.

Akagi says the Passamaquoddy came together to pay back an ancient debt to the alewives. They testified on behalf of the fish before the Maine legislature and the International Joint Commission, a bi-national agency charged with resolving disputes along the U.S.-Canada border.

“I told them that it was as simple as the indigenous species being replaced by an invasive species. And as a native person, I understand that,” he said.

After nearly two decades of lawsuits, appeals and international pressure, it was the unified voice of the Passamaquoddy, and the emerging science on the fish themselves, that finally broke the stalemate on the St. Croix. This spring, Maine legislators voted nearly unanimously to re-open the gates to migrating alewives.

At the Pleasant Point Reservation near the mouth of the St. Croix in Maine, local Passamaquoddy live in houses huddled on a rocky peninsula above a cold ocean that once sustained their people. Among the residents is Brian Altvater, chair of the Schoodic Riverkeepers, the tribal group that helped spearhead the fight. He says the alewives brought everyone together, on both sides of the border.

“The tribe, our neighbors — it took a total team effort to make this happen,” Altvater said. “It also took the effort of a lot of prayer, and ceremonies, and calling on our ancestors to give us a hand with this. And they did.”

But the river once harbored one of New England’s largest alewife runs, so the potential is real. All told, dam removals and fish passage on the St. Croix and other local rivers could restore tens of millions of fish into the Atlantic food chain.

Scientists believe that could help revitalize offshore fisheries for cod, pollock and haddock, and provide food for seabirds, marine mammals and people on both sides of the border.