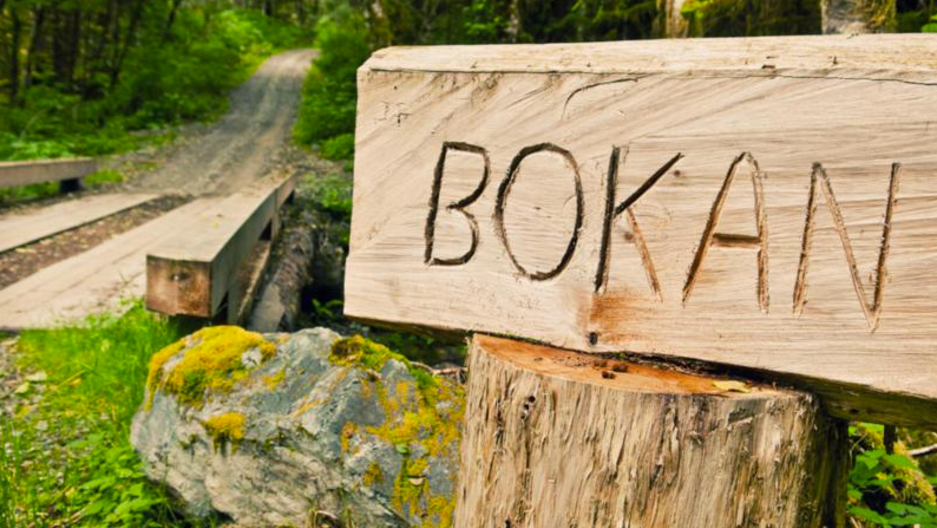 The Bokan Mountain site in Alaska could be a valuable source of rare earth minerals for the United States.

HYDABURG, Alaska — James Bell, 50, sits carving the intricate details of an arm into a totem pole in his shop in this sleepy, coastal southeastern Alaska town.

He wears glasses with a snap-on set of bifocals to better guide his carving knife, and the occasional hearty chuckle reveals deep wrinkles around his eyes. A lifelong fisherman and longshoreman, Bell’s hands are worn from years of hauling nets laden with salmon and loading old growth trees onto barges bound for the pulp mill in nearby Ketchikan.

Bell was born in Hydaburg and is a member of the Haida Tribe that is indigenous to this region. He speaks of his small, isolated town — Hydaburg’s population hovers near 380 — with an air of resignation and sadness. There are few jobs to be had these days, he says. The logging boom is over and the price of salmon is lackluster at best. More and more, laments Bell, Hydaburg’s young people are choosing to leave town in search of opportunities in bigger cities, like Ketchikan, about a half-day’s journey by ferry.

During the commercial fishing season, unemployment in Hydaburg hovers at approximately 12 percent, but shoots up to about 19 percent in the winter offseason. In previous decades, the Tongass National Forest was a boon for logging companies and a source of local jobs in Hydaburg, until recent legislation put a stop to mass logging.

Some 35 miles away, at the foot of Bokan Mountain on the shore of Kendrick Bay, however, lies one of the most sought-after natural resources in the world — one that could conceivably reverse the town’s economic fortunes.

Dysprosium, a “rare-earth” element, is essential in the production of technologies as varied as iPhones, wind turbines, smart bombs and predator drones. China currently dominates the global dysprosium market, but the discovery near Hydaburg could change all of that by supplying U.S. demands for decades to come.

Not everyone in Hydaburg, however, is enthusiastic about the idea of a mine. Despite the promise of jobs, some residents say a mine will lead to pollution of their salmon fisheries — amounting to a sacrifice of the town’s economic and cultural lifeblood for a mining prospect that, environmentally and economically, raises more questions than it answers.

“If they (the mining companies) go by the laws, it will be all right,” Bell said. “If they don’t, then they’ll just kill off our fish.”

Bell has good reason to be skeptical. Bokan Mountain has been mined before, and the communities surrounding it are still dealing with the fallout.

The U.S. Environmental Protection Agency (EPA) declared a retired uranium mine at Bokan Mountain a Superfund site in 2000. Now, residents worry that so-called “acidic tailings” — the liquid, often toxic, byproducts of mining — from the proposed rare earth mine could further contaminate Kendrick Bay waters, sullying one of the community’s primary subsistence fishing areas and damaging the regional commercial fishing industry.

When it comes to contamination of the land, former Mayor Thomas Morrison says there are people in Hydaburg who really care. But the land in question is owned by the National Forest Service and has been designated a mineral exploration area.

“Their voice is like spitting in the wind,” he said.

Because the Department of Defense needs dysprosium for weapons production, it has recently shown interest in Bokan Mountain — dysprosium was discovered there in early 2010 — as a domestic source of the mineral. Dysprosium is also highly sought-after by the Department of Energy (DOE) for its applications in renewable energy technology.

David Shuh, a senior scientist in the Chemical Sciences Division at the Lawrence Berkeley National Lab (LBNL), says dysprosium is currently essential in hybrid cars like the Toyota Prius.

“Without dysprosium, actually, the motor overheats rather easily and dysprosium is used to keep that heating down and keep the magnet together so it doesn’t literally explode at operational temperature," he said. "So it turns out it’s tremendously important.”

One Prius requires approximately 3.5 ounces of dysprosium. Toyota plans to sell one million of the hybrid cars per year over the next decade. That’s nearly 10 tons of dysprosium per year used by Toyota on the Prius line alone — or roughly one percent of China’s annual export of 992 tons.

In 2010, partly to demonstrate its dominance in the global market for rare earth elements, China began stockpiling its dysprosium, raising tariffs and reducing exports — moves that left the U.S. defense and energy sectors in a bind.

As a result, the U.S. government is desperate to tap a domestic supply of dysprosium.

In December 2011, the Department of Energy published a report saying dysprosium is of strategic national importance and national security.

Since the discovery of dysprosium here, political support for the mine has been increasing. In March 2012, then presidential candidate Mitt Romney referenced the issue in an open letter to the state of Alaska.

“Rare earth minerals found in Alaska can help free our country from monopolies abroad,” he wrote.

But environmentalists and locals like Bell worry the government’s thirst for the element will result in a lack of adherence to EPA regulations for mining. And their concerns appear to have merit: The mining project is eligible to apply for a streamlining of the environmental review process due to its national security importance.

Because one of the rare earths to be mined, dysprosium (used in cell phones, hybrid cars and wind turbines), is “considered of strategic national importance, normal environmental protections may be disregarded,” according to a report by the Southeastern Alaska Conservation Council (SEACC).

The EPA declined to comment on the project, on the grounds that it had not yet been asked for air and water permits by mining company Ucore Rare Metals and did not want to speak in hypotheticals.

A preliminary 2010 mineral study indicated that the Bokan Mountain site holds 5.3 million tons of heavy rare earths, with 207,000 tons of that being dysprosium -- effectively making it the largest known dysprosium deposit in the United States. Jim McKenzie, CEO of Ucore, says they plan to be in production “by late 2015 (or) early 2016.”

Ken Collison, a mining engineer and the Chief Operating Officer of Ucore, has the job of explaining why it will not harm the environment.

The mine will be underground, says Collison, with Ucore planning to re-inject the acidic tailings, or toxic byproducts, back into the mountain with cement.

“We’ll be the first mine I’ve ever heard about (that) when it closes, there’ll be no tailings whatsoever,” he said.

Ucore also plans to utilize a new technique for sorting minerals that uses laser technology to detect and sort specific ores, which in theory should make the mine more efficient than those that preceded it. The technology in question has never been applied to rare earth mining before.

That doesn’t stop McKenzie from declaring the technology will enable the company “to cut the bulk of the material that comes out of the mine virtually in half the rate of other mines.”

In April 2010, not long after dysprosium was discovered at Bokan Mountain, the Alaska state legislature drafted a resolution urging the U.S. Congress to issue permits “as promptly as allowed by law, for extraction, processing, and production of rare earth materials on the Bokan Mountain properties.”

The CEO acknowledged that Ucore's plan to go into production by the end of 2015 is about five years sooner than it would take most mining projects to get off the ground.

“In actuality that’s lightning speed,” McKenzie said. “The Bokan mine has a lot going for it,” he said, because Alaska is one of the “most mine friendly jurisdictions in the world.”

Signs From the Past

Ucore recently published a Preliminary Economic Feasibility study, a first step toward breaking ground, and the company remains on course. They continue to move ahead on an aggressive agenda that will make the dig at Bokan Mountain the first heavy rare earth mine in the United States to open in the next few years.

Meanwhile, a growing clamor for domestic rare earth mining can be heard emanating from the halls of the Pentagon to the boardrooms of technology and clean energy companies.

Whether Alaska’s Haida community will benefit from the Bokan mine, though, remains to be seen.

Asked if he has a message for Ucore’s CEO, Haida tribal member Bell looks up from the totem and sums up what many in his community are hoping:

“Keep it clean, and don’t kill off our subsistence.”

Along a pathway on the side of Bokan Mountain, a sign posted by the U.S. Forest Service at the mouth of an old uranium mine offers a reminder of what may again lie ahead, should the champions of expediency win out over those who would plead for caution. The sign features illustrations and words that caution readers of the dangers surrounding the abandoned mine.

Included is a drawing of an individual who is grabbing his throat, accompanied by a caption: “Toxic gases and lack of oxygen.”

Another panel reads: “Deep pools of contaminated water” next to an image of a splayed, outstretched hand reaching out of sludge.

The legacy of mining in the area is summed up by the words at the bottom of the aluminum sign that are accompanied by skull and crossbones.

They read: “Stay Out. Stay Alive.”

Research for this story was made possible by a grant from the Fund for Investigative Journalism.