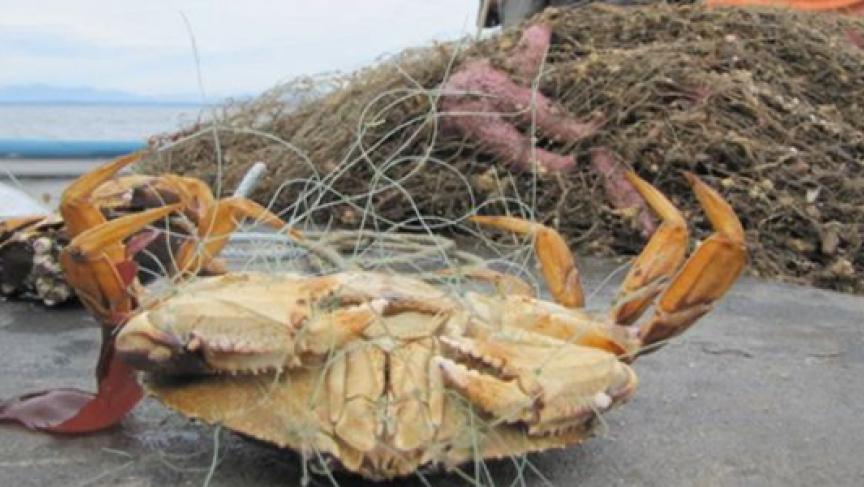 Share
Lost and abandoned fishing nets kill untold numbers of sea creatures around the world every year. But there's a growing global movement to remove what are known as "ghost nets" and prevent new ones, including an effort on the US-Canada border in Puget Sound, near Seattle. Pascal van Erp saw his first ghost net when he was exploring a ship wreck in the North Sea. "It was a very scary thing," the Dutch diver says. He says the abandoned fishing net almost got him. Other creatures weren't so lucky. "A lot of sea life was captured by the nets and the fishing lines," he says. The experience haunted van Erp, and he soon realized that ghost nets — nets lost or cut from fishing boats — were a global problem. So he founded an organization called Ghostfishing International to help raise awareness about the issue and connect people around the world who are working to remove nets. Van Erp says it used to be that every group working on the problem thought they were the only ones. Now, he says, "it's very cool to see there are 16 organizations acting on this problem," in places like Iceland, Italy, Australia, Kuwait and the US. Here in Puget Sound., Doug Monk leads ghost net removal operations for the Northwest Straits Foundation, which uses sonar to find ghost nets and then sends divers down to remove them. "We've pulled nets that have 50-60 birds in them, 1,200 crabs," says Monk, who's been a commercial diver on the Olympic Peninsula near Seattle for some 20 years, harvesting shellfish and sea cucumbers. For the past decade he's also been fishing for ghost nets. "I think if people realized the detriment it's done to the waters, they would have taken care of it a long time ago. But it's good to see them doing it now," he says. One day recently, Monk steered the 39-foot Bet Sea out into the waters off Point Roberts, a little peninsula that juts down into from Canada into Puget Sound and the U.S. It's a heavily fished area, Monk says, "lots of gill netting, lots of crab netting out there." The boat drops anchor and diver Ken Woodside straps on his gear and steps into the 43-degree water, where he'll work for the next 45 minutes, communicating with the crew on deck to help him find the nets on the murky seafloor, with about 4 feet of visibility. He eventually finds the net he's been looking for and begins disentangling it from the rocks and reefs below. The crew drops him a line, which he attaches to the net so it can be pulled to the surface. As he and the shipboard crew work, Megan Baker of the Cetus Research and Marine Conservation Society, based across the sound in Victoria, British Columbia, observes from the deck. There's a lot to soak up, even in this one small part of the operation. "We've heard a lot about their surface air supply systems and the divers and safety protocols, how the boat operates," Baker says. Her group's planning on starting its own ghost net program north of the border. Finally, from below, Woodside's voice can be heard from the shipboard speaker: "Ok, pull it up." The line spools back up onto the ship, and the net finally breaks the surface. It looks like a sea monster — a tattered brown mass stinking of rotting sea life, sea stars and crabs squirming among the tangles. Here and there a fish jawbone drops out on the deck. It's beautiful in its own horrible way. Woodside soon follows the net to the surface and climbs back onboard. He says it was a grim sight as the net was going up, with dead crab carapaces "raining down" from above. Crab — Dungeness in particular — is a major fishery here in the northwest. Joan Drinkwin, programs director of the Northwest Straits Foundation, says every ghost net means lost revenue for the industry. "We're estimating that the crabs that have been killed in the nets that we've removed to date at Point Roberts have cost the commercial crab fishery about $300,000 every year that the nets were there," Drinkwin says. That's to say nothing of the porpoises, seals, diving birds, salmon and rockfish the group has also found in the nets. Of course removing nets only solves part of the problem. Dutch diver Pascal Van Erp and others say the real key is preventing nets from being lost in the first place. Here in Puget Sound, fishermen are required to report lost nets, and the Northwest Straits Foundation works with local tribes and the fishing industry to get the word out about both the problem and things like better gear to avoid it. As Drinkwin watches another giant net being pulled from the deep onto the Bet Sea's deck, she says fewer nets are lost each year in Puget Sound, which gives her hope. "It's one of the few really big problems that we can solve'" she says. "And we're making a huge amount of progress." The Northwest Straits Foundation estimates that there are 1,000 ghost nets left in the shallower parts of the Sound. No one knows how many there are globally.