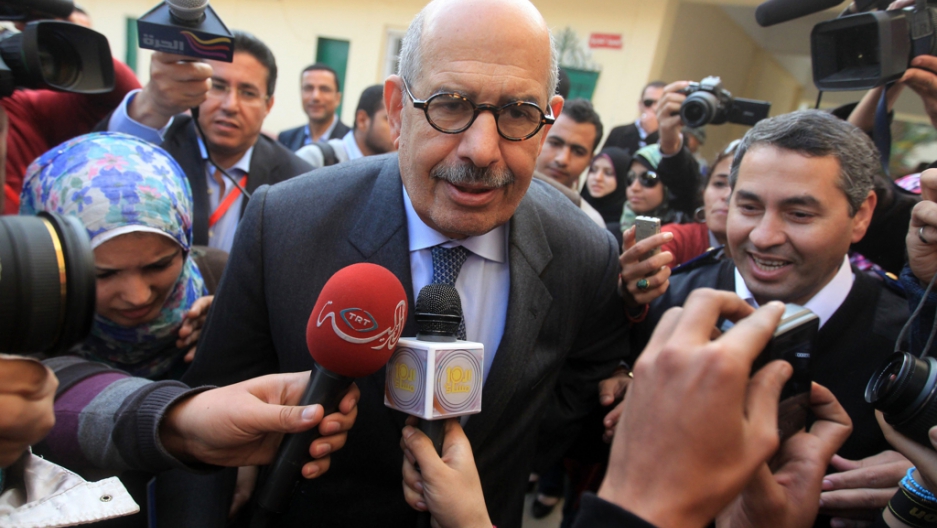 Less than a day after Egyptian officials said that Mohamed El Baradei, Nobel Prize winner and former head of the International Atomic Energy Agency, would be Egypt's new interim prime minister, the government said no decision had been reached on his appointment.

"So far there has been no official appointment," presidential advisor Ahmed al-Muslimani told Agence France-Presse.

El Baradei's appointment seemed imminent until late Saturday, when Egypt's second-biggest Islamist group, the Salafist Nour party, threatened to withdraw from the transition process if he was sworn in, BBC News reported.

Nour deputy leader Ahmed Khalil said the appointment "violates the roadmap that the political and national powers had agreed on," according to BBC News.

On Sunday, Mahmoud Badr, co-founder of the Rebel movement of liberal youth activists, called upon Nour leaders to drop their opposition to El Baradei, the Los Angeles Times reported.

A decision on the prime minister post is expected by late Sunday.

El Baradei opposed the rule of ousted President Mohamed Morsi and had said this week that he was in favor of deposing him as he had failed in the country's transition to democracy.

"The other option was civil war," he told BBC. "We were between a rock and a hard place."

He went on to say that the recent coup was just a small deviation. "Unfortunately we had to go though this hiccup, but I am very determined that hopefully we'll get it right," he said.

The former diplomat was a major figurehead in the Egyptian opposition movement that stripped former President Hosni Mubarak from power in 2011.

Not surprisingly, his candidacy was swiftly rejected by the Muslim Brotherhood.

“We reject this coup and all that results from it, including El Baradei,” Farid Ismail, of the Brotherhood’s political wing the Freedom and Justice Party (FJP), told Reuters.

Violent clashes are continuing on the streets of Cairo and nationwide. Supporters of the Muslim Brotherhood and those in favor of its political demise squared off as the military intervened to maintain order.

The Egyptian Health Ministry said that since the violence began on Friday, 36 had been killed with about 1,400 wounded around the country.

More from GlobalPost: Egypt, it is too early to celebrate

Violence between the two groups shocked Egyptians, said the New York Times, with reports of an execution of a Coptic priest and a video circulating allegedly showing Islamist supporters throwing two youth off a concrete tower.

There was also evidence of guns being used during the violence, uncommon during Egyptian protests.

Current interim president Adly Mansour has stressed that the ousting of Morsi was not a coup but a "recall" to prevent civil war.

El Baradei, 71, is an obvious choice given his position as opposition leader and his renown for his diplomatic work but he had opposed military rule just a year earlier. He was also said to be highly disliked by pro-army nationalists.

He initially ran for Egypt's national elections last year as leader of the National Salvation Front but withdrew his bid in January.

In April 2012, he launched the Constitution Party, which he intended to run in elections in 2016 but the future seems to have arrived faster than he anticipated.

More from GlobalPost: Adly Mansour sworn in as interim president