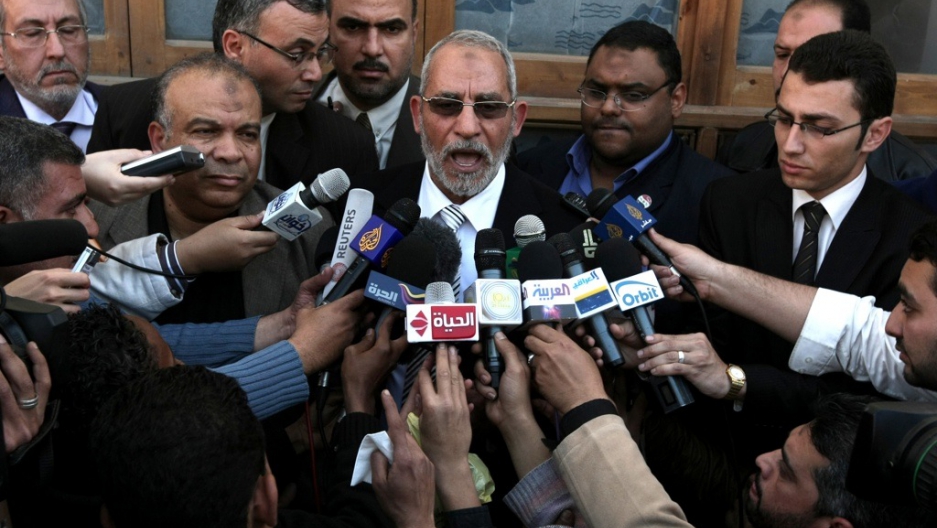 Mohammed Badie, the head of Egypt's Muslim Brotherhood speaks to the press outside a polling station in Cairo on March 19, 2011.
Credit: Mahmud Hams
Share

The supreme leader of Egypt's Muslim Brotherhood, Mohammed Badie, made a surprise appearance at a rally today in Nasr City, Cairo, in support of ousted Egyptian president Mohamed Morsi, the Guardian reported.

It had been reported that Egyptian military police had arrested Badie on Thursday.

Badie’s fiery speech to the crowd raised the possibility that there could be further clashes at pro-Morsi protests this evening.

An official at Egypt’s Ministry of Health said that six people have been killed in skirmishes between Morsi supporters and opponents around the country, the Associated Press reported.

“I take pride in my president Morsi, who is your president and president of all Egyptians,” Badie said, according to the Guardian. “We will stay in public squares until we free our elected president and we carry him on our shoulders.”

“We will sacrifice ourselves, our souls and our blood, for president Morsi,” he added.

Badie noted that all Egyptians had been given the chance to vote in the election that made Morsi president. “Curse everyone who wants to hurt the revolution and take it back to military rule,” he said.

He asked the army not to fire on its own people and said he was willing to talk to the armed forces, but only after Morsi was reinstated as president, the Jerusalem Post reported.