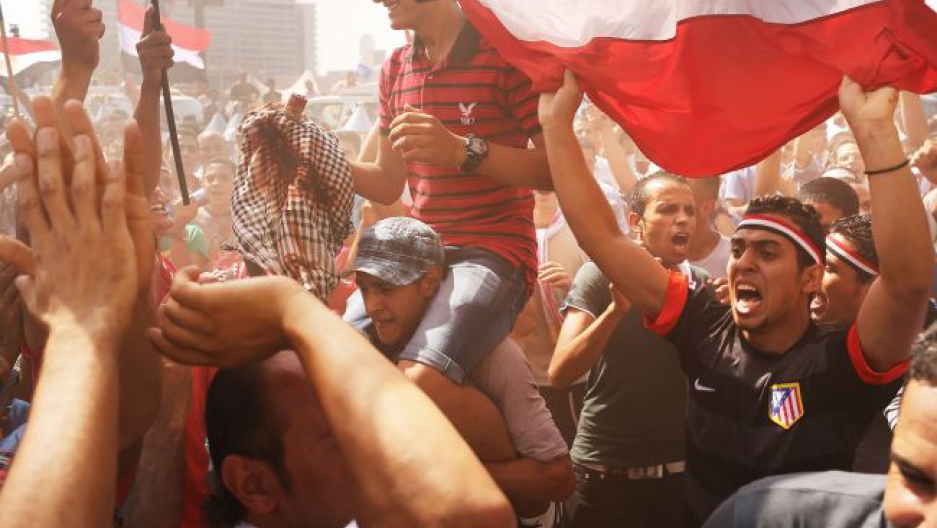 People dance and cheer at Tahrir Square, the day after former Egyptian President Mohamed Morsi, the country's first democratically elected president, was ousted from power on July 4, 2013 in Cairo, Egypt. Adly Mansour, chief justice of the Supreme Constitutional Court, was sworn in as the interim head of state in ceremony in Cairo in the morning of July 4, the day after Morsi was placed under house arrest by the Egyptian military and the constitution was suspended.
Credit: Spencer Platt
Share

Instead of blinding protesters with tear gas and targeting their eyes with birdshot, the Egyptian police distributed juice boxes and water bottles to the June 30 protesters.

The army didn’t conspire against the revolutionaries, allowing thugs on horseback to massacre Tahrir Square’s occupants, like it did in the “Camel Battle.”

Mubarak was toppled after a street war that destroyed the capabilities of his security apparatus and hundreds of strikes that paralyzed the country’s infrastructure.

On the other hand, Morsi was ousted with military muscle that reportedly issued arrest warrants for every influential Muslim Brotherhood leader, informed Morsi he was no longer president and declared the roadmap for the transitional period.

It is important to calculate the true price of ousting Morsi this way.

Yes, the country is now recovering from a regime that forced a divisive constitution, bullied minorities and opposition, and used populist, fascist and religious rhetoric to justify its tyranny.

However, the pursuit of holding the army generals accountable for their involvement in killing, torturing, and sexually assaulting protesters in the past three years seems now more difficult than ever.

The military’s favor will be rewarded with an unsupervised budget, and immunity for their massive economic empire.

Police generals are currently falsifying history, washing their hands of the blood of more than 800 martyrs, accusing the Muslim Brotherhood of assassinating protesters during the Jan. 25 Revolution.

The true power of civil parties is still untested. The gap left by the weakness of civil opposition is filled only with an increasing popularity of the armed forces.

Today is a day of celebration for the police, the army, supporters of the old regime, hardliner secularists who called for the “annihilation of the Muslim Brotherhood,” fans of the military rules and millions of too-optimistic Egyptians.

But for some revolutionaries who still stand for a civil state, not military rule, transitional justice, not a mass amnesia of army and police crimes, an inclusive modern state, not an oppressive regime that excludes opponents, it is still too early to celebrate.

At most, it is a time for a very short jubilation, before preparing for a very long battle.

Ahmed Ateyya is an Egyptian journalist and documentary filmmaker who participated in the GlobalPost-Open Hands Initiative "Egypt: Covering a Revolution" reporting fellowship in 2011.