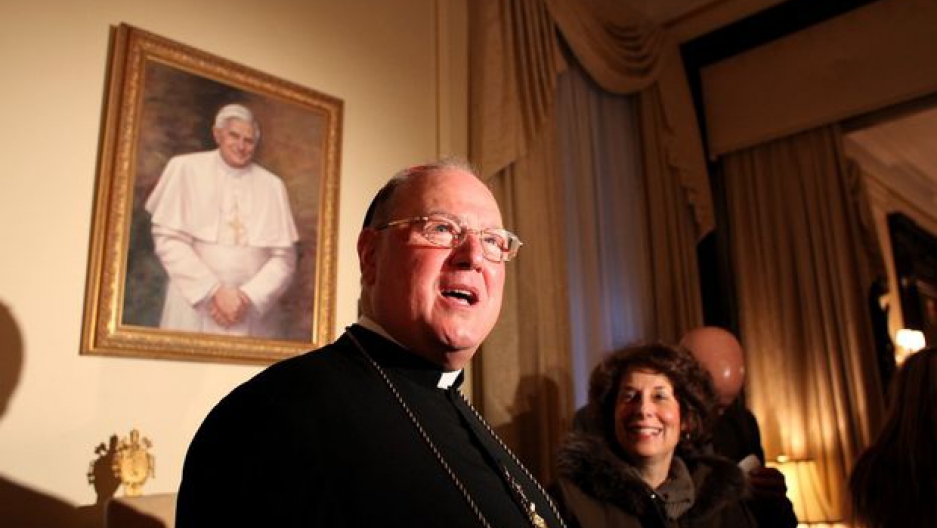 Archbishop of New York Cardinal Timothy Dolan was previously the leader of the Archdiocese of Milwaukee. (Photo by Stephen Nessen/WNYC.)

Among the information in new documents released by the Milwaukee Archdiocese is evidence that Timothy Dolan, the archbishop of New York, put $57 million in a trust fund for cemeteries out of concern it could be awarded to victims of sexual abuse by Catholic priests.

Dolan, the current archbishop of New York and the president of the United States Conference of Catholic Bishops, was considered a contender for the recent papal vacancy eventually filled by Jorge Mario Bergoglio of Argentina. Dolan has long been regarded as one of the "good guys" of the Catholic Church for being an outspoken supporter of the victims of clergy sexual abuse scandals.

Within the more than 6,000 pages of documents is evidence that Dolan tried to prevent some church assets from going to the abused, and that he used financial payments to try and encourage abusive priests to leave the church voluntarily — rather than wait out what could be a lengthy Vatican process.

“I welcome today’s voluntary release of documents by the Archdiocese of Milwaukee that contain information and details related to sexual abuse by clergy, and how the Archdiocese of Milwaukee responded to it," Dolan said in a statement Monday. "Unfortunately, we have already seen how the release of these documents will cause some to raise old and discredited attacks."

Dolan was ordained archbishop of Milwaukee in 2002 by Pope John Paul II a position he held until moving to New York in 2009.

In a 2007 letter to the Vatican, Dolan requested authority to transfer $57 million in church assets into a trust fund in an attempt to, as he put it, "protect the funds from any legal claim and liability."

The documents were released as a concession to the 575 men and women filing claims of alleged sexual abuse by Catholic priests and church employees. In a move they considered best for repaying the victims, the Milwaukee Archdiocese filed for bankruptcy in 2011. Negotiations over payments have since deteriorated and the victims are accusing the church of shielding the money.

"The cemetery funds have always been seen as an asset in trust, and Cardinal Dolan perpetuated that," he said in an interview with WTMJ-AM on Tuesday.

The victims will try to bring the trust funds into play in the bankruptcy proceedings, said Laurie Goodstein, national religion correspondent for the New York Times.

"The lawyers for the victims are insisting that those should be a part of the assets that are available to the creditors and most of the creditors are the abuse victims," she said.

A bankruptcy judge has yet to rule on that claim. Meanwhile, the church has been reluctant to settle its claims, arguing about 400 of the 575 cases are invalid.

"We may never have the complete picture because the records are not always clear and there is no way to delve more deeply because many of the people involved are dead or have had memories fade as 20, 30 or 40 years or more have passed," Listecki said in a statement. "The documents present one part of the history of what happened and demonstrate how people tried to do their best with what they knew at the time."