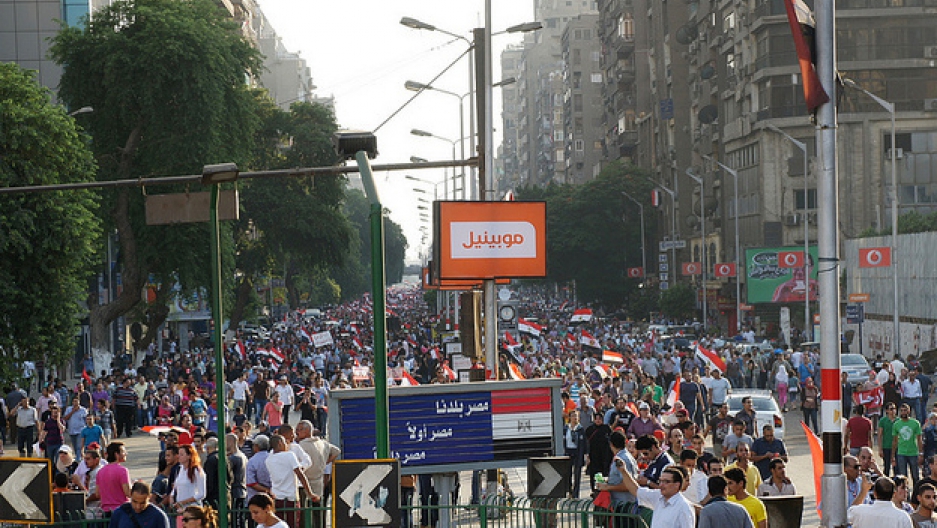 Egyptian protestors on their way Tahrir square to join the demonstrations against the Muslim Brotherhood and President Morsi on June 30. (Photo by Flickr user Kodak Agfa, cc-by.)

On the one-year anniversary of the election of Egyptian President Mohamed Morsi, hundreds of thousands gathered in Tahrir Square, while millions more protested across the country, demanding his resignation.

Protesters stormed the Muslim Brotherhood headquarters on Monday and clashed with members trapped inside the building while others threw Molotov cocktails and stones.

"People got out in very large numbers and we were asking for one specific demand, which is immediate resignation of the president and setting a date for new presidential elections," said Dalia Ziada, an Egyptian blogger and activist.

The protests are rooted in Egypt's desire for real democracy. Last year, the public staged similarly large protests against the military leadership in the country.

"They were not good enough in running state affairs and they failed in doing politics in the country," Ziada said. "Those people went out and said 'No we don't want you any more, we want presidential elections to have a civilian president.'"

Ahead of the protests this weekend, the highest religious authority in Egypt, the Al Azhar Institute, warned that the country is at risk of sliding into civil war, and Morsi himself seemed to be trying to make amends. In a widely televised speech marking his first year in office, he admitted to making mistakes. "I did my best with the loyal people of this nation to evaluate the situation. I was right in some cases, and wrong in others."

However, Morsi's speech didn't connect with most Egyptians and could have added to the unrest, said Michael Wahid-Hanna, senior fellow at the Century Foundation.

"It came very late. What was offered was, in a sense, airy promises of reconciliation and dialogue without any type of real substance to what was being said," he said. "In many ways, much of the speech aggravated the political scene prior to the protest and insured that they would be massive."

Even if Morsi refuses to resign voluntarily, he could find himself forced out of power by other means.

"One could imagine a scenario, and this obviously wouldn't be voluntary in the full sense, but a scenario by referendum is called on the continuation of Mohamed Morsi's presidency," Wahid-Hanna said. "The protest movement, to the extent that we can call it a sort of coherent thing, is pushing for early presidential elections."

Top Egyptian generals on Monday responded to the protest and gave Morsi a 48-hour referendum to respond to protestors or they would impose their own "road map" to resolution.

For protestors, a peaceful transition to a more democratic government system as opposed to a return to military rule is greatly preferred.

"Democratically speaking, he should listen to the people as long as democracy is the rule of the people," Ziada said.