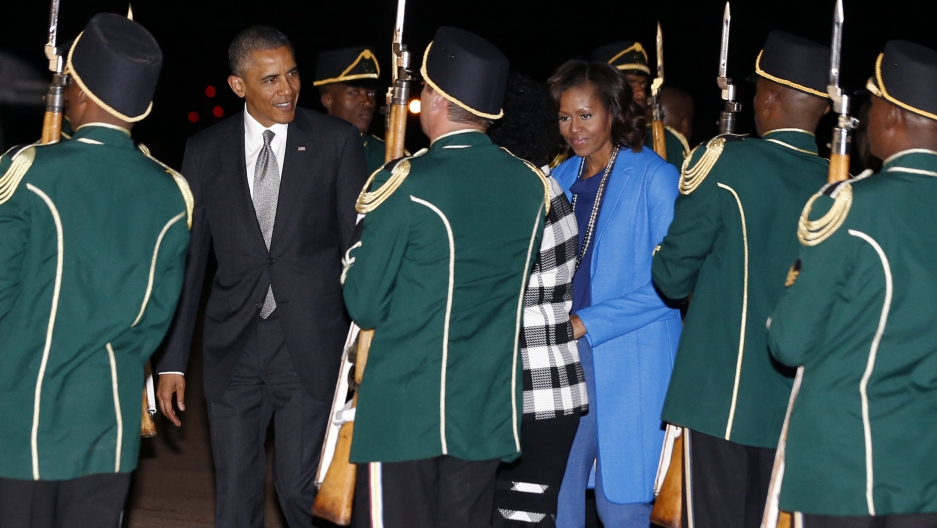 At the U.S. embassy in Pretoria, South Africa, on Friday, hundreds of protestors organized a peaceful protest of President Barack Obama who they say has not delivered on the promises made after his 2008 election.

President Obama lands at a time where there's already a huge media crush gathering around what may be the final days of former South African President and anti-apartheid icon Nelson Mandela. Obama's visit is the second leg of a tour around Africa.

The protestors were demonstrating against U.S. policy on Cuba, the war in Afghanistan, global warming and human rights violations including the continued use of the Guantanamo Bay prison.

"(The U.S.) government is not welcome, and is being received with antagonism," said Mbuyiseni Ndlozi, a Ph.D. student and campaign coordinator. "Therefore they have to rethink the standards by which they hold their government."

Ndlozi and the protestors used the Twitter hashtags #NObama and #ProtestUSA to organize social media protests of the president's visit.

"The fact of the matter is that Africa oftentimes is not focused on by our press and our leadership back home unless there is a crisis," he said. "Part of the reason why we want to focus here, starting in Senegal, is to make sure people understand there is enormous potential here."

When President Obama was elected in 2008 it brought a sense of euphoria to many Africans, who saw it as emblematic of United States sentiment that they would choose a man of African descent to the hold country's highest office.

"They thought that would put African issues onto the front burner in American foreign policy," said Lerato Mbele, co-host of BBC's Newsday. "It would predicate a lot of issues around economic development, healthcare, free trade, the kinds of things that matter to Africa as it raises its profile in international relations. That hasn't happened."

President Obama's continued engagement with the Middle East and consideration of issues like nuclear proliferation has left many Africans feeling like their unique interests are being ignored, Mbele said.

"There is a sense that Barack Obama hasn't delivered, maybe, on the aspirations of Africa's people if not the promises that he overtly made to Africa's people," she said.

Though evidently desired by both parties, a visit between President Obama and Mandela seems unlikely. Obama and his team don't want to draw any extra press to the ailing leader. President Obama has called Mandela a "personal hero" who has shaped his ideals on reconciliation and forgiveness.