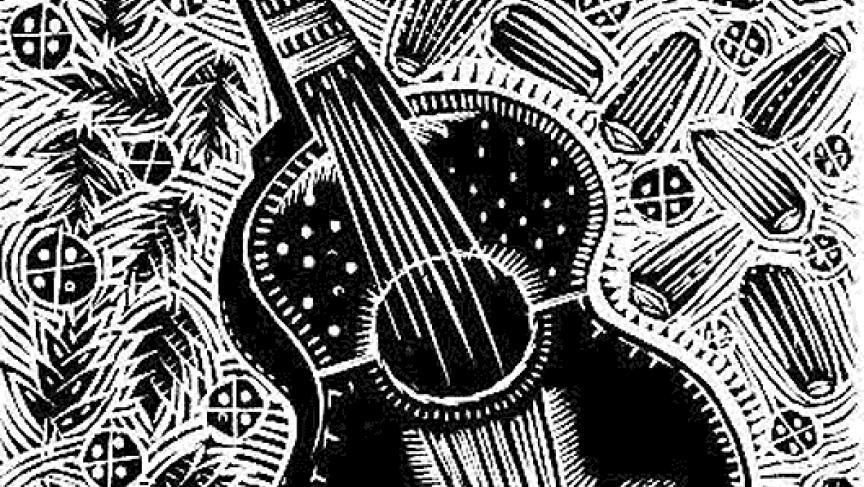 Share
Alec Dempster is not a typical 'Son Jarocho' musician. He was born in Mexico City to a French mother and British father. The family moved to Toronto when he was 5. "I grew-up playing music, studying classical guitar, but really being close to all kinds of other music that was around me. My Dad plays baroque music, he also plays Zambas Argentinas. And then I started going back to Mexico much later, I was about 18 or 19," Dempster says. It was during one of these trips that he discovered the southern Veracruz style called Son Jarocho. He went to the town of Santiago Tuxtla, one of the cradles of this music. "With the intention of getting there in time for the annual 'Son Jarocho' festival," he says "and the celebration of their patron saint, it's all kinds of festivities are happening along side the 'Son.' Yeah that's where I, I think it really hit me, the Son Jarocho. I got to see Son Jarocho music in its context and the Fandango and musicians just all over town playing music that had come from all over, from rural communities, from other cities. That's how I got in touch with Son Jarocho music." In 1998, Dempster settled in the capital city of Xalapa, Veracruz, and got immersed in the local Son Jarocho community, but not as a musician. Dempster created a series of linocuts and wood prints inspired by son jarocho songs. Later on, he produced six field recordings and learned how to play the music. Three years ago, he and his wife Kali NiÃ±o left Mexico for Toronto. They formed a group called Café con Pan, the only Son Jarocho group in Toronto, as far as they know. Their debut album is titled "New Roads To Santiago". And Alec Dempster is still a professional visual artist. He's had solo exhibitions in the US, Canada, France, Spain and Mexico. He recently published a book of 60 linocut prints inspired by Son Jarocho tunes. It's called Lotería Jarocha, a play on a popular Mexican board game.