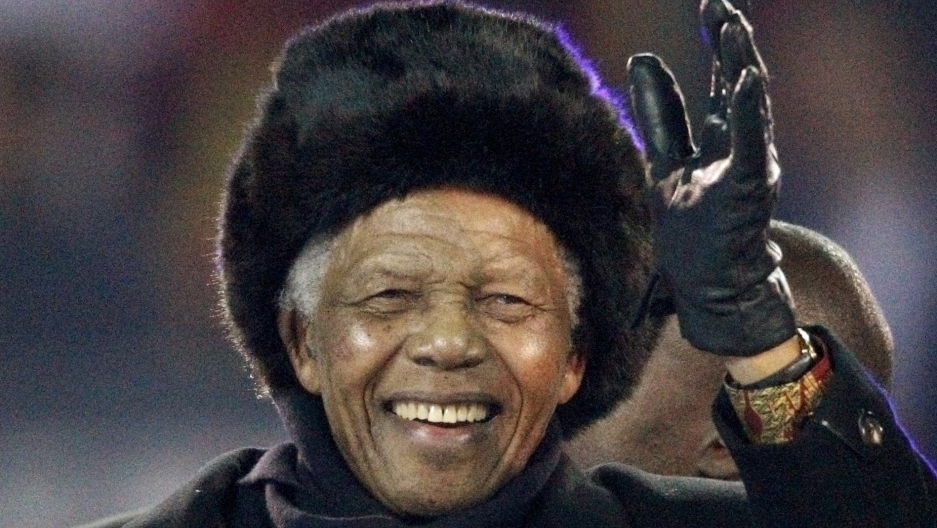 Former South African President Nelson Mandela waves to the crowd at Soccer City stadium during the closing ceremony for the 2010 World Cup in Johannesburg July 11, 2010.

Former South African President Nelson Mandela, 94, remains hospitalized with a serious lung infection. Reports about his condition, which has deteriorated in recent days, have varied — though the president of South Africa said Thursday it had improved somewhat.

President Barack Obama, who is in Africa this week, called Mandela a hero during a speech on his first stop in Dakar, Senegal.

"If and when he passes from this place, one thing I think we'll all know is that his legacy is one that will linger on throughout the ages," President Obama said.

South Africans around the country are bracing for the news, and praying for his health. Though Johannesburg has become a place for prayer and reflection, it's also become a press hub for scores of international journalists. But the media stir over Mandela's health is causing some angst in the country.

"I'm going to say it. There's sort of a racist element with many of the foreign media where they just cross boundaries," said Zindzi Mandela, the anti-apartheid leader's eldest daughter. "It's like, truly vultures waiting for when the lion has devoured the buffalo."

Crowds who have gathered outside the hospital where Mandela is being treated have also expressed their discontent with the foreign media, who they feel are being disrespectful.

"There have been incidents where ordinary members of the public have been driving past, slowing their vehicles and shouting at the media members gathered outside telling them, you know, that they should go home. Nelson Mandela is not dead, so what's the need for them to be standing there?" asked Declan Walsh, a reporter for the New York Times.

Other South Africans have said that the scores of media are an expected tribute to Mandela's popularity.

"That again reflects this broader ambivalence that South Africans, who themselves have a great appetite for news about Mr. Mandela, they want to know that he's well," Walsh said. "They just don't like the idea massing outside the hospital or his houses or making sort of a public spectacle about this.

The media presence is thought to be the largest since the early 1990s, when Mandela was freed from prison and elected president.

President Obama is scheduled to visit South Africa Friday, while the country struggles with the deteriorating health of perhaps its most cherished leader. The first black presidents elected in their respective countries have never met face-to-face.