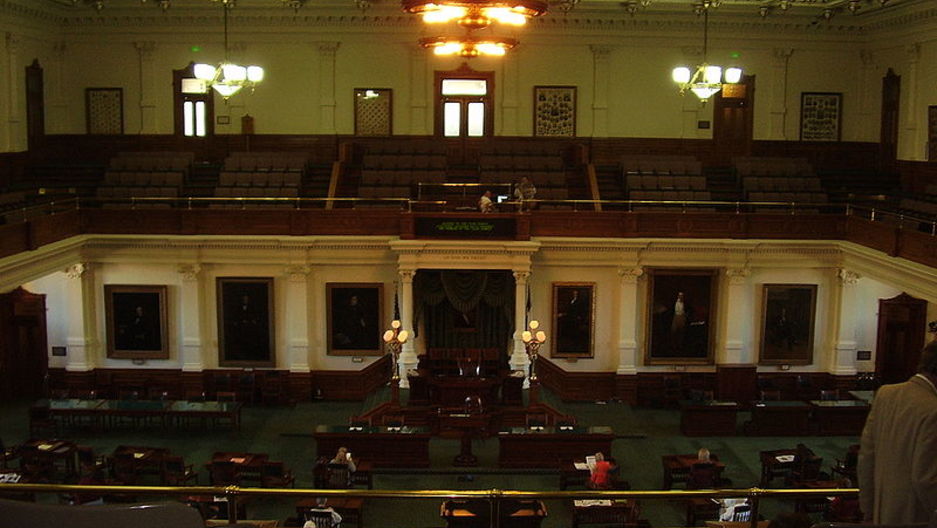 The Senate Chamber of the Texas Capitol is empty now, but it was the scene of a 13-hour filibuster Wednesday night, including an hours-long debate on parliamentary procedure. (Photo by WhisperToMe via Wikimedia Commons.)

Texas State Sen. Wendy Davis has found herself thrust into the national spotlight after completing a nearly 13-hour filibuster of a bill that would have imposed heavy restrictions on abortion in the state.

More that 200,000 people tuned in to watch the filibuster on streamed live by the Texas Tribune. The streaming video went viral on social media. Politicians like President Barack Obama and U.S. House Minority Leader Nancy Pelosi, and celebrities like actress Lena Dunham and comedian Sarah Silverman all posted their support on Twitter, slowly raising Davis' to political superstar by the end of day Tuesday.

"She came in and has very much been trying to make a name for herself and has not been shy about doing things that will upset the other side of the aisle," said Ben Philpott, of KUT public radio in Austin.

Thousands of people showed up to support Davis and protest the abortion bill. Supporters lined the gallery and filled the rotunda at the Capitol, and often made their voices heard, at one point chanting, "Let her speak!"

The bill intended to ban abortions for women more than 20 weeks into their pregnancy and require abortion doctors to have visiting rights at nearby hospitals, a provision some think could effectively close all but five of the centers in Texas.

Republican senators made a last-ditch effort to pass the bill by a midnight deadline, but were stymied by cheers from the gallery, as well as a series of parliamentary maneuvers by other Democratic senator. A final attempt was made to vote, but not until after midnight had passed, when the 30-day special session had ended.

Texas Governor Rick Perry called the state legislature back into session next week to reconsider the bill.

Davis' is no stranger to the last-ditch filibuster. In 2011, she ran out the clock on a bill that would cut funds to public education. Perry called a special session the next day and the bill was passed despite Davis and other Texas Democrats efforts.

Nothing prevents Perry from calling another special 30-day session to give representatives another chance to consider the anti-abortion bill.

"Obviously, if another 30 days is given and abortion is the first bill heard in the session it's going to be very hard," Philpott said. "Democrats are in the minority in both the Texas house and the Senate and so there's no way other than the filibuster to keep that from happening, especially with 30 extra days to do it."

The Texas legislature will also revisit state redistricting changes once blocked by the Department of Justice, following yesterday’s Supreme Court ruling striking down a key section of the Voting Rights Act.