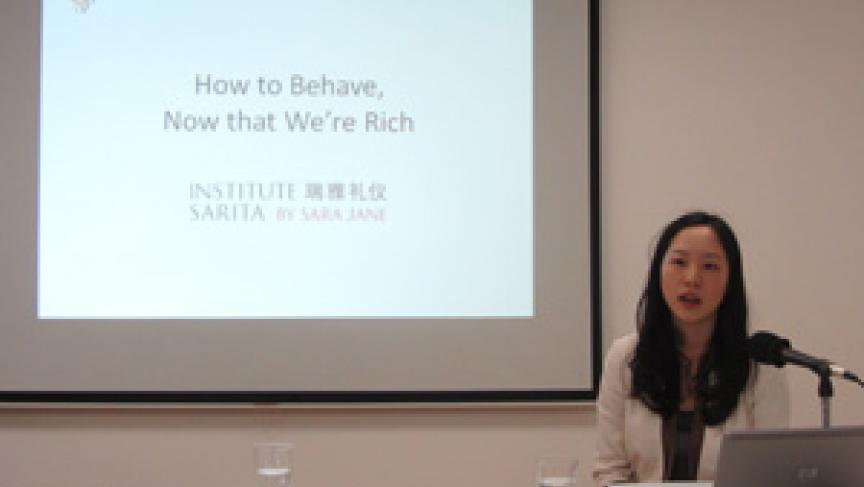 Share
China has one of the world's largest wealth gaps, with much of the wealth amassed by Communist Party elites and their friends. That's created social tension and resentment, enough that President Xi Jinping has ordered Party cadres to cut down on the conspicuous consumption. China's nouveau riche are also learning that in the great wide world beyond China, having money without manners doesn't necessarily buy you respect. Hou Limi's husband made his money in oil. Despite her new station in life, Hou she says she could use a little help. "What I want to learn most is how to talk to people," Hou says. "I want to sound well-educated and cultured." As she talks, she watches her young son race around a parking lot filled with expensive cars. Just beyond are flashy designer shops. Hou is wearing a few of the labels, but still seems ill at ease with her new station in life. Sara Jane Hou — no relation — might have the solution. "I have two classes, a debutante course for unmarried women, and then a hostessing course for older, married women." Her students pay the equivalent of $16,000 for a 12-day course at the Institute Sarita. The hostesses learn how to set a table, when to use what cutlery, how to make small talk. They also get a few extras: "We have a class on fur and after that, my students go shopping for fur coats. We have a class on jewelry etiquette, and the students inquire after all the pieces." Sara Jane Hou is supremely poised, polished and self-confident about her own ability to pass on how to live the good life, and appear cultured doing it. She grew up in Hong Kong, attended a Swiss finishing school, as well as Harvard Business School. Now, just in her late 20s, she's a few months in to this new endeavor. There's already a waiting list, she says. "What my clients are looking for is a guide to how to behave. China is a leading economical power, but only when the Chinese go abroad and interact with the international elite, with the Western elite, do they realize that to truly be a leader, they have to know how to behave because some degree of civility is essential for any kind of shared public life." Indeed. But in the same parking lot where I met the oil executive's wife, I chatted with a migrant worker named Gao Shihai who sells balloons here. He sees the nouveau riche every day. "They look down upon poor people," says Gao. "The way they talk, the way they act, depends on what other people have." As Gao and I talk, several well-heeled owners of these luxury cars breeze past us, and past a blind man, playing the er-hu, a traditional Chinese violin, for spare change. Of course, not all of China's elites are disdainful of the poor. Philanthropy has been growing – from a small base. But there's a clear power divide between ordinary people and China's nouveau riche, who are often connected to the Communist Party. China's leaders recognize the potential cost of growing social tension, so after too many instances of luxury cars with official plates hitting people or otherwise behaving badly, the government has banned military license plates on Porsches and certain other luxury cars. It's a start. Another passerby I meet in this neighborhood has another suggestion for what China's nouveau riche could learn. Wang Xin is an elegant young woman, who, though Chinese, has spent most of her life in Paris, first studying the marketing of luxury, and now doing film production. She thinks Chinese need to learn what's really important in life. "Because in China, the only standard to measure [whether] people are successful or not is only money," she says. "The most important thing for me is what you like in your life, and if you're happy in your life. I think what's most important is to ask yourself the question, 'what is happiness?'" For some people, happiness might be as simple as buying your kid a balloon on a warm summer's day. But the balloon seller, Gao, says the owners of the luxury cars here don't buy many of his balloons. He sells enough to others to make a living. He's from a poor rural area in central China and every month, he sends home money for his three kids. "I wish them to do well with their studies, so they can have a better future than me, so they don't have to sell balloons like me," Gao says. When I ask him how he hopes they would behave if they became rich, he says he'd like them to help other people, those who are less well off. If consideration for others is the heart of good etiquette, Gao seems to have already learned it. And if China's to have the social harmony the government says it so values, China's nouveau riche would do well to do the same.