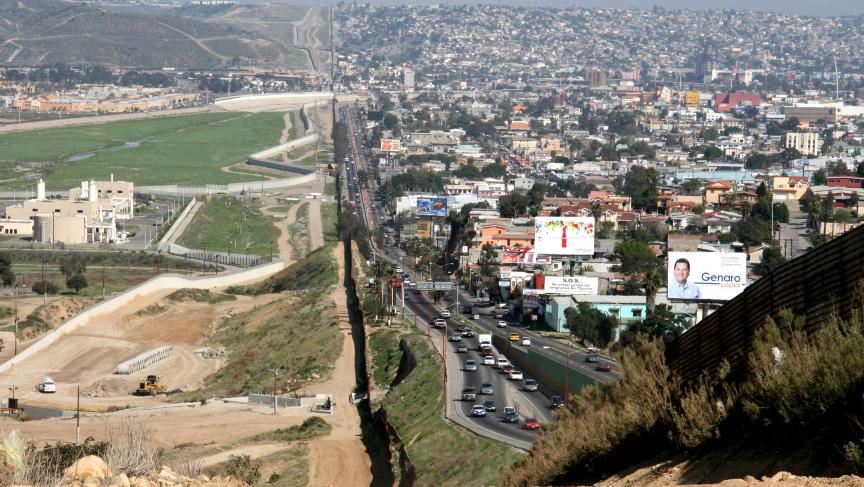 A small fence separates densely populated Tijuana, Mexico, right, from the United States in the Border Patrol's San Diego Sector in 2007. Construction was underway to extend a fence over the top of this hill and eventually to the Pacific Ocean. (Phot

The U.S. Senate is building momentum toward passing an immigration reform bill that includes a major increase in funding for security along the southern border.

Some $30 billion would be spent to increase patrols and fencing on the border between the United States in Mexico — funding that's viewed as being key to securing enough Republican support for the broader initiative.

But Mexican journalist and Univision news anchor Enrique Acevedo argued in an opinion piece for ABC that the U.S.-Mexico border is already one of the most intensely patrolled places on earth, and adding more money for more security, including 700 miles of new fencing, is a bad plan.

"Rather than viewing border enforcement as part of a broader strategy, border enforcement became the only strategy to stop undocumented immigrants from coming across the border," he wrote. "This security-based approach has led to a degradation of the quality of life for once dynamic border communities as well as grave human rights violations."

U.S. Sen. John McCain, R.-Ariz., speaking to CNN Tuesday morning said this bill would make the U.S.-Mexico border the most militarized frontier since the fall of the Berlin Wall. And that's no good, according to Acevedo.

Acevedo said the new plan will provide enough money for 40,000 armed border patrol agents, or one roughly every 250 feet if they lined up together at the same time, will only suffocate the border — "it won't seal it."

"Millions of people live in these border communities and ... we're going to have one of the most militarized borders in the history of mankind, with a friend and a partner like Mexico," he said. "It's bad on many levels. It's bad for the bilateral relations with Mexico. ... It's also going to hurt the environment, many species will be endangered. And finally, it's going to represent a challenge in human rights."

Further, Acevedo says, our history of border patrols show only limited success, decades gone by and billions of dollars spent, with the biggest dent in border crossings coming from the 2008 economic collapse.

"That has been the only time in the last 40, 50 years where we've had an actual reduction ... of illegal immigration into this country," he said.

Acevedo says the better way to handle immigration is to look at the economy in general and U.S. employers specifically to try and make it so immigrants are less interested in risking so much to come here.