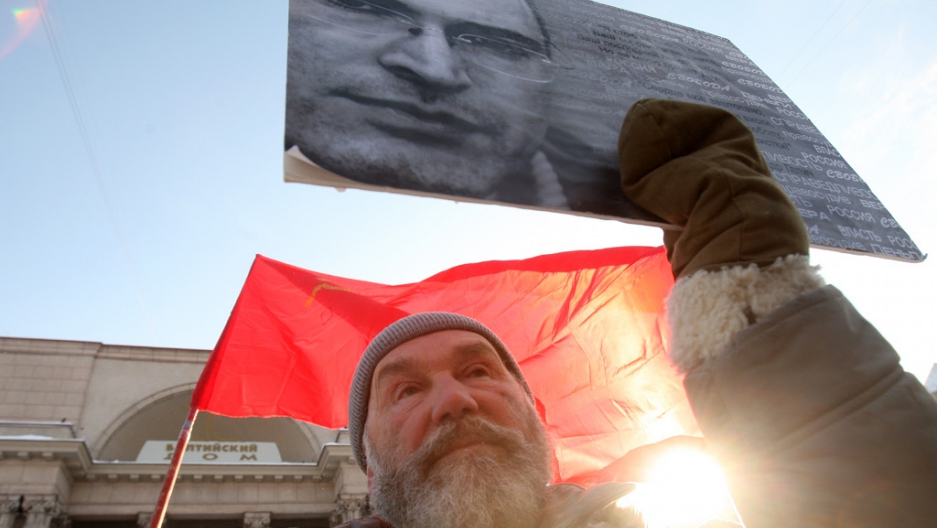 A man holds a portrait of the jailed former head of the Yukos oil giant Mikhail Khodorkovsky as left opposition activists take part in the so called 'Day of People's Rage' protest rally in St. Petersburg, on February 12, 2011.
Credit: Kirill Kudryavtsev
Share

Not only did Mikhail Khodorkovsky — former richest man in Russia turned social activist — turn 50 in prison, he did so while learning authorities are contemplating charges that could keep him behind bars.

Khodorkovsky was also the subject of a documentary on Russian television late Tuesday that accused him of plotting murder.

His modest hopes “to entertain fellow-sufferers with tea and sweets” probably seemed quite enjoyable by comparison.

Khodorkovsky once led one of Russia’s most successful oil companies, Yukos, before it crumbled under the weight of multi-billion-dollar tax charges.

“As long as Putin is in power, Khodorkovsky is going to stay in prison,” said Garry Kasparov, a world chess master who has fled Russia himself after lashing out at Moscow.

Khodorkovsky endured two trials and has been in prison for 10 years on a variety of financial charges related to Yukos.

More from GlobalPost: Inside the Khodorkovsky trial

A panel of Russian experts convened to examine his convictions has found little evidence to convict Khodorkovsky, but now even they fear for their safety, AFP reported.

"(The) Kremlin is preparing for a new trial because it fears Khodorkovsky more than it fears Al Qaeda," Russian opposition leader Boris Nemtsov told the news agency.

As for the murder accusations, they stem from a film by state-run NTV called “Murder for a Present.”

Filmmakers suggest Khodorkovsky and his former business partner, Platon Lebedev, were involved in the death of a Siberian mayor.

Vladimir Petukhov died on June 26, 1998, the same day Khodorkovsky turned 35, and a Russian court convicted another Yukos employee in the case.

Khodorkovsky and Lebedev were to be released next year, but the Kremlin is making overtures of further charges related to the murder.

“I doubt, to say the least, that there is a possibility of me being released,” Khodorkovsky said in a New Times article this week.

Amid all the gloom surrounding him as he turns 50, a growing list of high-profile supporters are sending messages of support to his website.

“Ten years is a long time in a country’s history, even more so in a person’s life. I look forward to Mikhail Khodorkovsky’s release as soon as possible,” said Latvian lawmaker Inese Vaidere of the European People’s Party.

“If Russia aspires to develop a closer and more productive relationship with the EU, it should release all political prisoners.”

Putin faces increased political pressure from abroad and accusations from within that his government is quashing dissenting opinions.

In a Moscow courtroom this week, a judge is hearing charges against 14 people arrested and accused of rioting and attacking police last May.

A study conducted at the request of the Republican Party of Russia, an opposition group, found no evidence of rioting to base the charges on.

Police detained as many as 400 during the demonstrations against Putin in May 2012, and 14 alleged organizers face as much as eight years in prison if convicted.

Among those caught up in the arrests are popular opposition leaders Sergei Udaltsov, ally Leonid Razvozzhayev and activist-blogger Alexei Navalny.