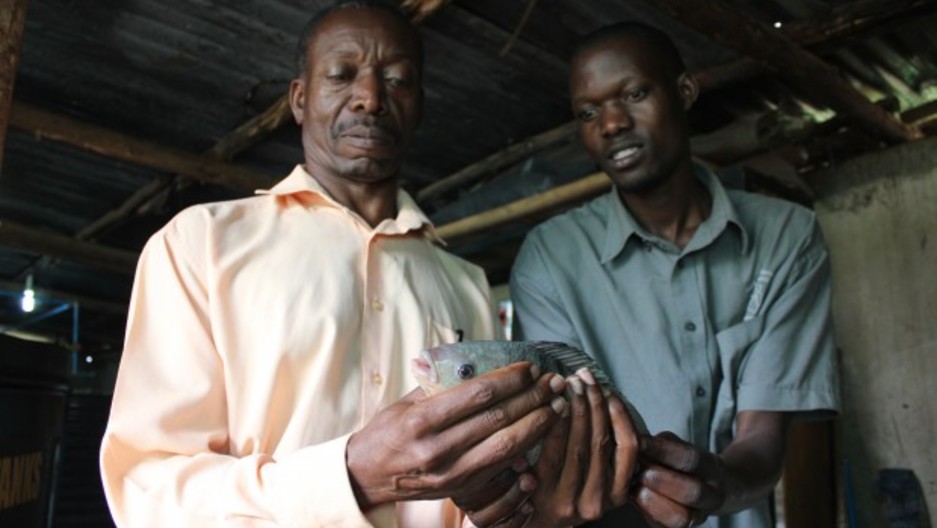 Kampala Entrepreneur Charles Mulamata is developing low-cost technology to produce fish, like this tilapia, together with vegetables in a largely closed-loop system.

"Aquaponics" is an almost climate-proof method of raising fish and vegetables using much less space, water and chemicals than land-based agriculture. It's not new but it's been slow to catch on in Africa, where the demand for vegetables and protein is soaring. Now one Ugandan entrepreneur thinks he's finally hit on a winning formula.

Charles Mulamata fell hard for aquaponics while poking around online after an attempt to start a fish farm failed. It was love at first sight for a small businessman-slash-engineer-slash-serial tinkerer.

"I love this aquaponics thing," he tells me. "And I think it's going to do a lot for this country."

Aquaponics is the marriage of aquaculture — fish farming — and hydroponics — vegetable farming without soil. In the United States, you can buy an aquaponic system from any number of commercial suppliers. Here in Uganda, setting one up is an exercise in improvisation.

Mulamata has converted the narrow courtyard between his house and his office in Kampala into a makeshift aquaponics laboratory — a thicket of blue plastic pipes and black plastic tanks and wooden troughs filled with gravel.

"This is a siphon that we have fabricated out of a mineral water bottle, and this is a perfume bottle," he says, showing me one of his experiments. "So we tried to make this as simple as possible."

Mulamata's first fish tank was a discarded refrigerator. He has fashioned aerators out of shower nozzles and filters out of second-hand barrels and PVC pipe. He has been testing clay balls instead of stones for growing the plants, since they hold moisture longer and absorb the equatorial heat.

But aquaponics uses 90 percent less water than conventional fish ponds, and the plants grow much faster, and need much less space, than they would in the soil. It's also nearly climate-proof, since it doesn't really rely on the weather.

And, just as important for a place like Uganda, it provides two income streams.

"Fish farming in this country has been problematic," Mulamata says, explaining that the high cost of feed tends to cancel out the profits from selling the fish. The "secret" of an aquaponic system, he says, is the vegetables.

"These vegetables can be harvested on a monthly basis. By the time you come to nine months, you're already sustaining yourself. So fish income comes in as a bonus, as a wonderful bonus."

Mulamata says a well-designed aquaponic system should break even in less than a year. At least that's what his calculations tell him.

Trouble is, hardly anyone's actually doing it here. His own set-up is experimental, since his place is too small for a full-sized vegetable bed. He recently installed a bigger system for a neighbor, but she hasn't harvested the fish yet. What Mulamata needs to get things rolling, he says, is cash.

"We have the technology, we have demonstrated it is viable. I don't have the money."

Mulamata says there are two big reasons aquaponics hasn't caught on yet in Uganda: the start-up cost, and the need for training. So he's come up with a plan.

On a sunny afternoon, Mulamata hosts an open house for what he calls the Africa Aquaponics Association. His goal is to recruit investors for a "microfranchise" scheme, in which they put up some money while Mulamata and his team help plan, finance and manage their systems.

About 25 people show up for the event, including an official from Uganda's national department of fisheries, who makes a speech pledging support. Several attendees say they are strongly considering taking the plunge. By the end, Mulamata is giddy.

"This has been successful beyond my dream," he says.

I accompany Mulamata on a drive to the countryside, where he hopes to build an aquaponics facility on half an acre he owns with his wife. Back in Kampala, we meet with the minister of agriculture from the Kingdom of Buganda, a regional body with considerable power in central Uganda. The minister sounds genuinely enthusiastic, and leaves Mulamata feeling hopeful.

There seems to be momentum. But nothing in Uganda moves fast.

One afternoon, Mulamata and his wife Joyce treat me to some of the fruits of their labor. Charles scoops a tilapia from one of his tanks, Joyce plucks some greens from one of their troughs, and an hour later they summon me to their modest dining room. Joyce has prepared a feast: steamed bananas, rice, fish stew, peanut soup, Chinese cabbage salad, sliced avocados and freshly squeezed passion fruit juice, nearly all of it from the neighborhood.

Mulamata has told me again and again how badly Uganda needs aquaponics, and also what a smart investment it is. As we eat, I ask him how much of his motivation is as a businessman, and how much is as an idealistic Ugandan.

"Fifty-fifty," he says after a short pause.

Half businessman, half idealist — maybe, just maybe, the formula this technology needs.

Not long after our visit, Mulamata emailed me to say he'd landed a contract to build an aquaponic system for a local nonprofit. It's a welcome injection of cash, but more importantly, it's a chance to build a his first fully functional facility.

Because with aquaponics, Mulamata says, once you see it, you can't help but fall in love.

"What's for Lunch" is the latest chapter in "Food for 9 Billion," a two-year project spearheaded by Homelands Productions and the Center for Investigative Reporting, and broadcast partners PBS NewsHour and American Public Media's Marketplace.