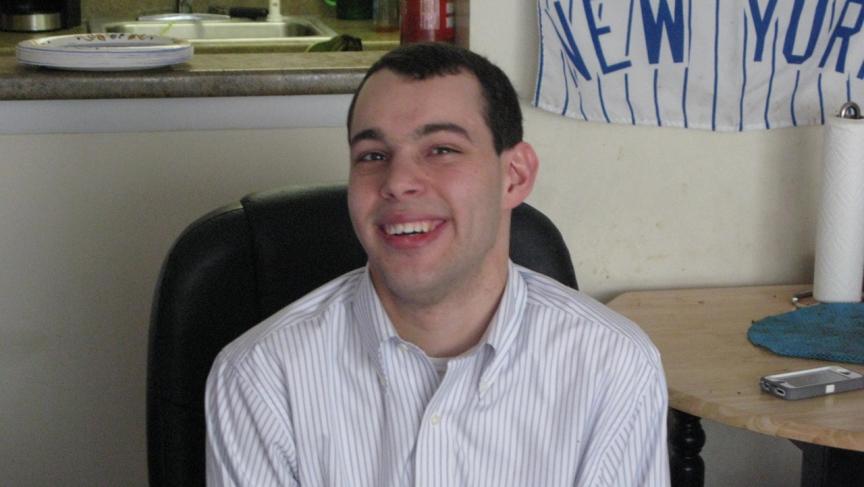 Share
When Reid Davenport was in college, he planned to spend a semester abroad. He was accepted into a program in Florence, but then was strongly discouraged from attending after program officials learned Davenport has cerebral palsy. That could have been the end of the story. Instead, it gave him a powerful idea. I met Davenport in his small apartment in downtown Washington, DC. He's cheerful and clean cut. Davenport, who graduated from George Washington University in the spring of 2012 with a degree in journalism, is now living on his own. He says his parents raised him to be self-reliant. "I have challenges, but everyone has challenges. Just because my challenges are more apparent doesn't mean that I can't do something," he says. Davenport can walk, but he uses a wheelchair most of the time. He says for one thing, people stare at him a lot less when he's in the wheelchair. "It kind of explains a lot. Whereas if I'm walking, people may not know why I'm walking differently, why I'm talking differently." Davenport has to work a lot harder than most people to get the words out, but he didn't want me to use a voiceover for him for the radio story. In fact, in addition to being a freelance reporter, he's an occasional public speaker. His cerebral palsy gives him a unique perspective. "At times it's really therapy for me to write about what I go through," he says. "And I like to have my voice heard." During his junior year in college, Reid hoped to study in Italy. But when the program officials learned he used a wheelchair, they talked him out of it because of the lack of accessibility. He was disappointed. But then he began to wonder: What's it like for people with physical disabilities in Europe? In the winter of 2012, Davenport went with a cameraman to find out. He produced a documentary about the trip called "Wheelchair Diaries." Davenport was shocked by how hard it was to get around because so few buildings, public transportation, even sidewalks, were wheelchair accessible. "Europe is such a progressive society," he says, "and it was the juxtaposition between the progressive society and the lack of accessibility." He interviewed people from Ireland, Belgium, France and Italy, including Carlotta Besozzi, director of the European Disability Forum. She says about 14-percent of Europe's population are living with disabilities. "They are not first class citizens," Besozzi says in the film. "There is a lot of discrimination." Davenport learned that discrimination takes different forms there. It's also much more hidden than in the United States. He went around Brussels with a journalist named Francois who also has cerebral palsy and uses a wheelchair. There weren't even curb cuts in the sidewalks, so Davenport had to ride in the street alongside traffic. He and Francois spent several hours trying to find a place to eat – nothing was accessible. "It's always a vicious circle," says Francois in the movie. "If you don't accessibilize [sic] your building, people will stay home. And if people with disabilities stay at home, those responsible for making buildings accessible will say what's the point of getting it accessible because no one is using it?" Davenport says in order for people with disabilities to be included and win social acceptance, they first need to be able to get through the door. So why has Western Europe done relatively little to accommodate people with physical disabilities? "I mean the obvious answer, and the excuse I hear all the time is, it's older, and the old buildings just can be made wheelchair accessible." But Davenport doesn't buy it. He thinks it's mostly indifference. We're not talking about restructuring one of the Seven Wonders of the World, he says. "We're talking about putting a ramp up, making sure the elevator works, making sure public transportation is accessible." On the other hand, Davenport says people in Europe were always willing to help. In Naples, a group of 14-year-old boys carried him in his wheelchair on and off of a bus. He questions whether that would happen in the U.S. A repairman in Brussels fixed his broken wheelchair for free. All of which makes it hard to generalize about countries, or cultural attitudes towards disability. "There were closed minded people in Europe and there are closed minded people in the United States. People helped me in Europe and people help me in the United States. " Maybe it's more about individual empathy. Gavin, an Irishman with chronic progressive muscular dystrophy who appears in "Wheelchair Diaries," put it this way: "The moment you know someone in a wheelchair is the moment you look at the world differently. You start to see it the way they see it. " Reid Davenport's documentary, "Wheelchair Diaries" is being shown at film festivals around the country.