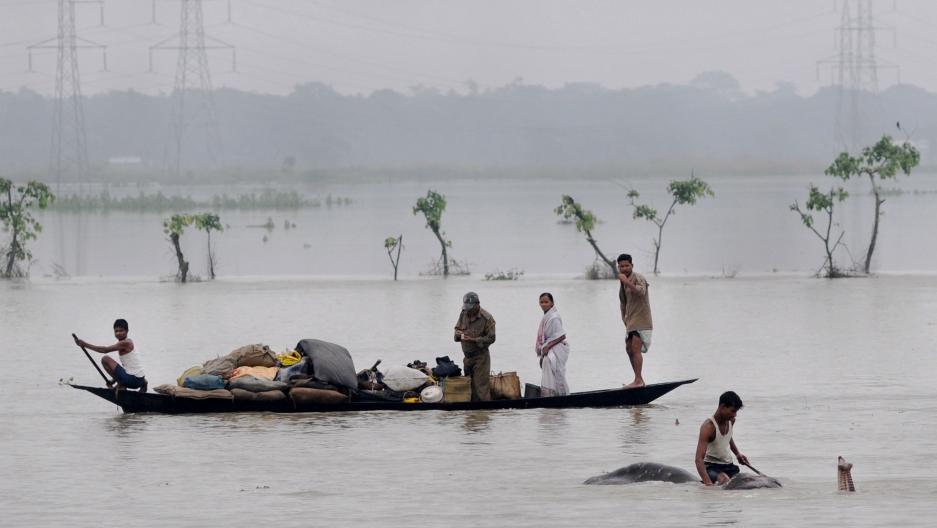 A mahout moves an elephant to higher ground as villagers paddle with their belongings through flood waters in the Pobitora Wildlife Sanctuary, some 55 kms from Guwahati, the capital city of the north-eastern state of Assam on June 28, 2012.
Credit: STRDEL
Share

India's devastating floods have left at least 609 people dead, with officials speculating that the number of casualties could surpass 1,000 in what is being called a "Himalayan tsunami."

"We have evacuated more than 34,000 people, some 49,000-50,000 people are still stranded there," Home Minister Sushilkumar Shinde told reporters after a meeting with members of India's National Disaster Management Authority (NDMA).

Shinde is heading to the hard-hit state of Uttarakhand on Saturday to survey the damage.

Amit Chandola, an Uttarakhand spokesman, said that at this point, rescue operations were focused on evacuating nearly 27,000 people trapped in the Kedarnath temple area, one of the hardest-hit, the Associated Press reported.

"The government has not yet been able to determine exact figures on the number of deaths, injuries, and missing persons due to lack of connectivity with the flood-affected areas," Chandola added, saying about 14,000 people were still missing.

Also Friday, rescue workers found 40 dead bodies in the Ganges near the holy city of Haridwar Friday, and India's air force dropped paratroopers, food, and medicine on those areas still cut off by the heavy flooding.

Many of those missing or stranded were in the midst of undertaking the so-called “Little Char Dham” pilgrimage, a spiritual trek Hindus take to the four (char) Himalayan sites most revered by the religion: Badrinath, Kedarnath, Gangotri and Yamunotri, GlobalPost's Jason Overdorf reported.

Families also continued to desperately search for loved ones, and many who escaped the worst of the flooding were struggling to make sense of the devastation.

"There was nothing but death in front of us," Gurjit Singh, who escaped the flooding, told CNN. "Now that we've got out, we feel like we've got a second life."

Prime Minister Manmohan Singh did an aerial survey of the region on Wednesday, and has pledged 10 billion rupees ($170 million) to the local Uttarakhand government to aid in the rescue and rebuilding efforts.

Meanwhile, Google has launched a "person finder" app to help in the rescue search, which "allows individuals to post and search for the status of relatives or friends affected by a disaster," Google said in a blog post about the application.

The app also allows press agencies, NGOs, and others to add to the database and receive updates.

The program was tracking about 2,500 records as of Friday afternoon.

See Jason Overdorf's tweets from the banks of the Yamuna: [View the story "Delhi shifts poor to relief camps as Yamuna reaches record levels" on Storify]