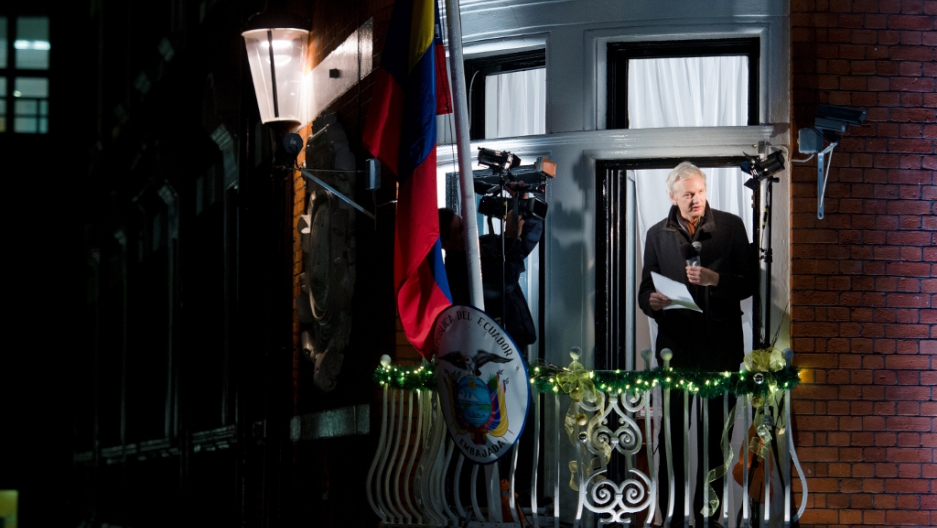 Wikileaks founder Julian Assange addresses members of the media and supporters from the window of the Ecuadorian embassy in Knightsbridge, west London on Dec. 20, 2012.
Credit: Leon Neal
Share

“We have been in contact with Snowden and have been helping him,” Assange said. “I feel a great deal of personal sympathy with Mr. Snowden.”

Assange then suggested his anti-secrecy website may help publicize new disclosures that Snowden and other news outlets have said are on the way. It's unclear when and what kind of information will be released.

The news comes a day after Assange - in an effort to avoid extradition on allegations of sexual assault - marked his one-year anniversary as a resident of Ecuador's London Embassy.

Assange is wanted for questioning in Sweden, but refuses to leave the embassy, believing he may be sent to the US, where there is an investigation into WikiLeaks' part in releasing hordes of secret US government data provided by Bradley Manning.

Assange also told reporters that WikiLeaks and Snowden were in "the process of brokering his asylum in Iceland.”

Iceland's interior ministry told Kyodo News in an e-mail that said Snowden, who is thought to be in Hong Kong, has not filed an asylum application.

However, Tomasson did say WikiLeaks spokesman Kristinn Hrafnsson had met with a ministry representative, who "went over with him the legislative arrangements regarding asylum seekers and the rules that are in force."

"In order to apply for asylum in Iceland, the individual in question must be present in Iceland and make the application in his or her own name," Tomasson added.