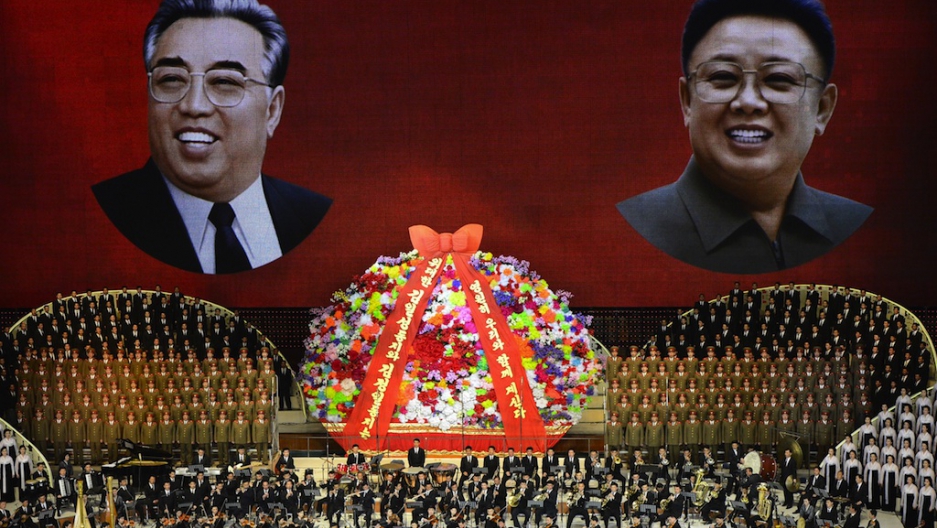 North Korean performers sing in front of portraits of founding president Kim Il-sung (L) and his son Kim Jong-il during celebrations to mark the 100th anniversary of the birth of Kim Il-sung in Pyongyang on April 16, 2012.
Credit: PEDRO UGARTE
Share

"The denuclearization of the Korean peninsula was the dying wish of Chairman Kim Il Sung and General Secretary Kim Jong Il," First Vice Foreign Minister Kim Kye Gwan told a meeting with Chinese officials in Beijing, according to a statement.

"North Korea is willing to have dialogue with all sides and attend any kind of meeting, including six-party talks, and hopes to peacefully resolve the nuclear issue via negotiation."

Kim Il Sung died of a heart attack in 1994. His son Kim Jong Il stepped up to power by propagating a nuclear development program — culminating in the first regional stand-off the same year the Great Leader passed away. Washington pressured Pyongyang to give up its program, and since then, this pattern of war threats has been sparked every few years.

In newly conciliatory mood, North Korea on Sunday offered to hold high-level talks with the US — though American officials called on the regime to take concrete steps toward denuclearization before they would agree. Meanwhile North Korea's attempt to restart talks with South Korea fell flat after a dispute about which delegates would attend.

The same day that the North Korean minister met his Chinese counterpart, diplomats from South Korea, the US and Japan held a summit in Washington, DC, to discuss a joint response to North Korea's overtures.

The allies agreed that to demonstrate its offer is serious, North Korea should not only stick to the terms of its denuclearization agreement with the US, but go above and beyond them. That pact, signed in February 2012 in exchange for US food aid, required North Korea to stop enriching uranium and put a moratorium on nuclear and missile tests.

More from GlobalPost: North Korea talks carry the burden of a national tragedy

Pyongyang knows that its nuclear program remains its most powerful bargaining chip, however. Andrei Lankov, a North Korea expert at Kookmin University, has told GlobalPost several times that the program is a part of the regime's overall strategy for survival, rather than regional domination. By threatening South Korea and the world, North Korea can get aid and concessions. It can keep its constant state of military emergency alive by pointing to the need for nuclear weapons to fend off a hypothetical, American-led invasion.

Despite the war-clanging, North Korea's state-run Korean Central News Agency (KCNA) has intermittently insisted it ultimately wants a denuclearization of the Korean peninsula. But the government's terms are unacceptable to Washington and Seoul: the regime will let down its arms once it has, some experts say, unified the Korean peninsula under its rule. Such a scenario is incredibly unlikely.

The United Nations is next month expected to discuss imposing further sanctions on North Korea as punishment for carrying out its third unauthorized nuclear test, in February.