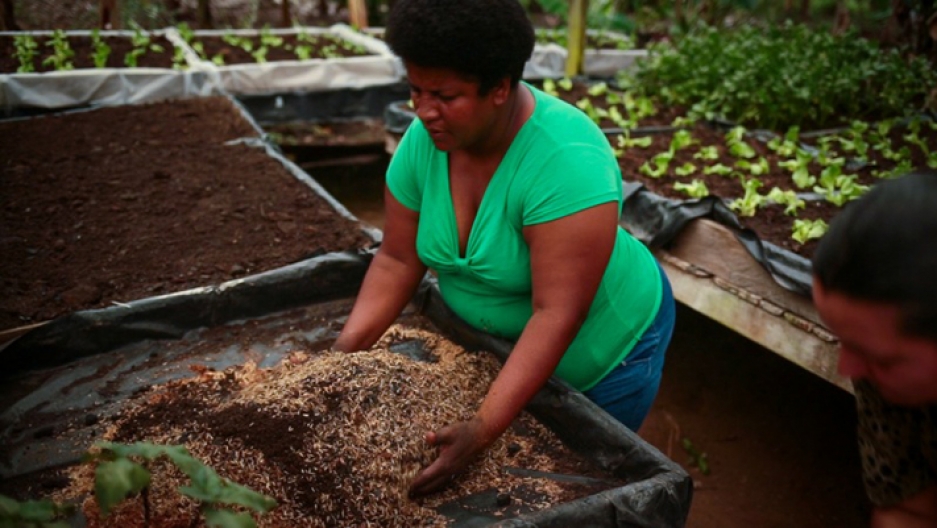 Costa Rica has become a laboratory for reducing the climate impact of agriculture since the country announced four years ago that it would become the world's first carbon-neutral country by 2021. Scientists, small-scale farmers and industrial plantations are all taking part in the effort. Sam Eaton reports in the latest installment in our "What's for Lunch" series on food and climate change.

Costa Rica is a tiny country with big plans. Four years ago its leaders declared that it would become the world’s first carbon-neutral nation by 2021 – transportation, energy, everything – including agriculture, which represents a whopping 37 percent of Costa Rica’s emissions.

Agricultural emissions can be some of the toughest to reduce. But you wouldn’t know it talking with farmers like Maria Luisa Jimenez, one of hundreds of Costa Rican small farmers who are replacing conventional agricultural practices with cheap, low-carbon technologies.

All are fresh and delicious, and all are produced on her quarter-acre plot, with a fraction of the usual greenhouse gas emissions from farming.

Jimenez says while her farm may be small, it’s incredibly productive. Every month she harvests about 2,000 heads of lettuce, hundreds of cabbages, celery, cauliflower, cucumber—the list goes on. And it’s all organic.

But where things get interesting from a climate perspective is the soil. One of the biggest sources of greenhouse gas emissions in agriculture is nitrous oxide from synthetic fertilizers, something Jimenez has avoided altogether through a low-carbon soil management system she calls “organoponics.”

Instead of conventional fertilizer, organoponics uses a mixture of dried rice husks, coconut fiber, composted cow manure and biochar, a charcoal-like material made from agricultural waste that would otherwise be burned. The biochar traps carbon in the soil, and helps hold water and nutrients.

Jimenez learned these techniques through a government training program. Now she’s a trainer herself. She says more than 550 Costa Rican families have learned the same processes over the past five years.

“If we had time to visit every one of them,” she says, “you’d see that everyone is in the same position as we are. They have a lot of food, they have many ways to feed themselves in a healthy manner while caring for the environment.”

But what works for small farmers like Jimenez doesn’t necessarily work for everyone. So the push to become climate neutral here isn’t about any single approach.

Down the road from her farm, at the government-owned Los Diamantes Experimental Station, scientists are working with a suite of low carbon alternatives for big livestock producers, starting with their waste.

Biotech scientist Pablo Acuña says waste from animals like pigs is a huge problem because it releases lots of the powerful greenhouse gas methane. Globally, more than 12 percent of carbon emissions come from livestock, and those emissions are growing fast.

But the methane from the pigs at Los Diamantes never reaches the atmosphere. Instead, at this demonstration carbon-neutral farm it’s captured in what’s known as a biogas digester— a sealed pool of pig waste covered by a sort of big balloon, which slowly fills up as the methane bubbles out of the waste. Instead of escaping into the air, the gas is used as fuel for various parts of the farm.

The digesters are an inexpensive technology that’s spreading around the country. Other low tech solutions in the mix here include planting trees in the place of fence posts and seeding pastures with new varieties of grass that cause less gas when cows eat it.

But some of the most important work here is being done in the accounting room. Los Diamantes has created a template for other farms to keep track of their emissions reductions. That’s essential both for meeting Costa Rica’s zero carbon goal and for selling emissions credits it earns along the way, which likely will become more and more valuable on the global carbon trading market.

Gloria Abraham Peralta, Costa Rica’s minister of agriculture, says there’s another advantage to being a frontrunner in carbon-neutral farming: branding.

“The ability to be carbon-neutral gives producers an added value to their products in the marketplace,” Peralta says, much like producers of fair trade coffee.

And the carbon-neutral effort is slowly being embraced by some of the country’s large scale producers. The list includes Dole, the largest fruit and vegetable producer on the planet, which has a giant banana plantation in Puerto Viejo on the Caribbean coast, not far from Los Diamantes.

Dole’s Carlos Montero say the plantation has cut water use at its processing plant by 80-percent, and it now recycles all of the plastic it uses to protect bananas in its fields.

But Montero says the biggest impact on carbon emissions has come from tweaking its fertilizer—it’s begun using slow-release fertilizer pellets about the size of a BB at the base of each banana tree.

“Besides minimizing the number of application cycles,” Montero says, “we reduce our nitrogen emissions to the atmosphere by about 40 to 50 percent. And it maximizes the plant’s nutrient absorption.”

Dole is trying to make its entire banana supply chain in Costa Rica carbon-neutral. But it’s still a long way from zero. The company’s biggest challenge is in shipping, which accounts for more than 60-percent of banana-related emissions.

And this is where one of the more contested tools being used here comes into play.

At the edge of the plantation, banana trees give way to a green wall of wild forest—part of more than six thousand acres of forest Dole has set aside in Costa Rica, an area about three times the amount of land they have in bananas. The idea is to use these trees to absorb some of the CO2 the company produces through shipping.

It’s an approach Costa Rica as a whole plans to rely on heavily to meet its goal.

It’s also a tricky and controversial solution and one that’s tough to replicate in more populous countries with less forest land.

But it’s all hands—or tools—on deck here in Costa Rica. The impacts of climate change are already being felt, and that’s given an urgency to the country’s 2021 deadline to make agriculture, and its entire economy, carbon-neutral.

And it’s got leaders here hoping that their examples will help the rest of the world do the same.