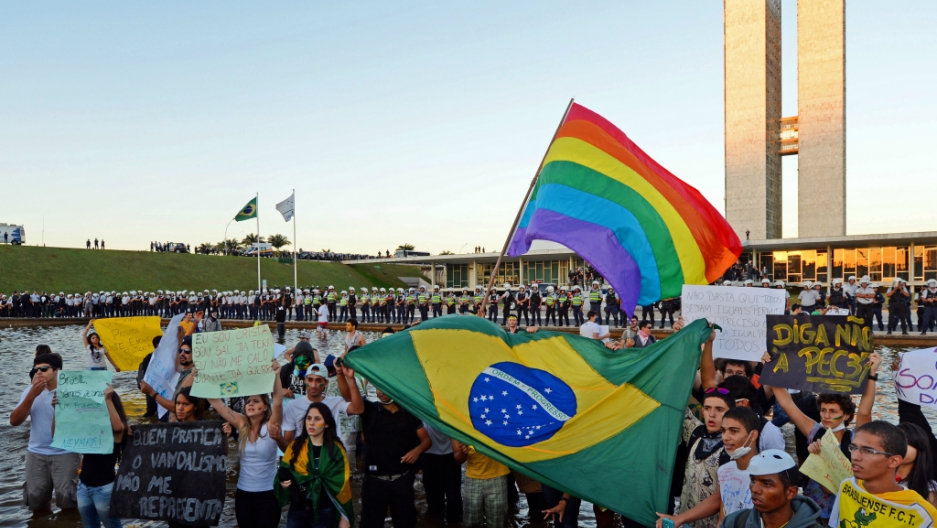 Students take part in a protest against corruption and price hikes at the National Congress in Brasilia on June 20, 2013.
Credit: EVARISTO SA
Share

Editor's note: This is an updated version of a story published early Wednesday. Check back for more updates on this unfolding story.

BRASILIA, Brazil — “We have woken up,” reads a banner youths are carrying in their march on congress. They're also holding bandanas soaked in vinegar — for protection from tear gas.

Hundreds of protesters bypass shield-wielding police to scramble up a ramp and storm the roof of Brasilia's congress. Now they whoop, sing and dance, casting giant shadows over Oscar Niemeyer's iconic bowl architecture.

That was the stunning scene, Monday night, in Brazil's capital, as protesters simultaneously marched through the streets of 10 other cities, including Rio de Janeiro and Sao Paulo, braving a sometimes violent backlash from police.

The turnout is estimated to have grown to more than 200,000 nationwide in that evening's protests — the country's biggest in 20 years — against a slew of new economic woes in a changing Brazil.

On Tuesday night, protests raged on in Sao Paulo, drawing some 50,000 marchers, a handful of whom clashed with police as they tried to enter City Hall.

Now, about 10,000 people are protesting outside the soccer stadium in Fortaleza ahead of today's Brazil vs. Mexico match.

Protesters have already made some gains: officials in important state capitals such as Porto Alegre and Recife announced plans Tuesday to lower bus fares, one of the original demands.

But with more rallies expected this week, this movement shows no sign of abating.

“This is the moment to show that the whole of Brazil is fighting, and that we have a voice,” said Jacqueline Ferreira, a 20-year-old student. “Even my mother told me to go the streets, because she said ‘this cause is true, the time is rigfht.’”

The time is indeed crucial. An international soccer tournament called the Confederations Cup kicked off here Saturday. Many are watching this closely as a test run for soccer's massive World Cup, which has required major infrastructure and stadium revamps, to be hosted here about a year from now.

Rio de Janeiro will also host Pope Francis next month for World Youth Day, and the Olympics in 2016.

Brazil is also at a turning point. Over the past decade of economic growth, some 30 million people moved up to the middle class. Their expectations are transforming along with them. Now that they no longer have to scrabble to survive, they're demanding not just democracy, but better democracy, with better representation and services commensurate with their hefty tax burden.

But economic growth is slowing substantially, even as inflation still rises, which is squeezing wallets in Latin America's largest economy.

Earlier this month she experienced her first significant drop in public opinion polls — losing 8 points to stand at 57 percent.

As a 20-year-old leftist guerrilla, Rousseff was arrested and tortured by the military dictatorship. Her governing Workers Party members once participated in huge protests to end dictatorial rule.

In a televised address Tuesday, she sounded almost as if she'd been marching right along with them.

"Brazil woke up stronger today," Rousseff said. "The size of yesterday's demonstrations shows the energy of our democracy, the strength of the voice of the streets and the civility of our population."

But that empathetic tone came in stark contrast with Brazil's police crackdown on protesters.

Now the government says it will beef up the military presence for tighter security around Confederations Cup games.

The recent bout of demonstrations started last week in Sao Paulo, the country’s largest city and financial hub, with a rally against a 10-cent bus fare hike. Its organizers, the Free Fare Movement, drew in some 5,000 people. A higher ticket price was the last straw for some commuters in a sprawling, congested city where journeys can take upward of two hours.

The rally seemed peaceful, but the police hit back forcefully, spraying tear gas and shooting rubber bullets at protesters and the journalists reporting on the scene. Startling images of the crackdown were plastered on the front of every newspaper. That ignited a firestorm.

“We saw the demonstration in Sao Paulo and we realized we have the power to change things. It is in our hands to express ourselves,” said Eliza, a student in Brasilia who preferred not to give her last name.

Before long, calls to demonstrate had spread through social media, and the purpose of the protests had evolved. Brazilians found in them a means to express a latent, simmering anger at the myriad problems facing Brazil — a "first-world country with third-world services," as some protesters put it.

“The increase in bus fares was only the spark of the current protests,” explained Mauricio Santoro, a political science professor at the Federal University of Rio de Janeiro and adviser to Amnesty International.

“They quickly became the expression of something deeper: a lot of dissatisfaction with the Brazilian political system, the poor quality of public services, the lack of representation of parties, the way World Cup and the Olympics have been organized.”

The way the protests were planned, through social media, with no centralized organizing body, has mobilized young people on an unprecedented scale. On Facebook pages giving details of the marches, demonstrators vote for which color shirts they should wear, or which causes they will be chanting about.

In common with the Arab Spring and the protests rocking Turkey, most of the protesters are young, well-educated students.

“We do not fight for one group, but for all of Brazil,” said Marcello Silva. “The police, too, police should know that they are Brazilian people and would benefit from the protesting of people like us on the streets.”

While protesters had scores of complaints, they cited some gripes over and over again.

Corruption costs Brazil billions every year. Recent cases such as the “mensalao,” a huge cash-for-votes scandal that ended in jail time for high-profile politicians and businessmen, have lowered public tolerance for political wrongdoing.

“Congress is taking the country’s riches, its treasures,” 28-year-old Marcello Silva said. “There is so much corruption, such bad administration of public money. We have politicians who don’t represent people and are just working for their own reasons, not for collective reasons.”

Many Brazilians say they’re angry at overspending on stadiums and other projects for next year’s World Cup and the 2016 Olympics.

“The initial projects had one price, and at the end of construction we had another completely different price, which was doubled,” said Caio Silva, a social media manager for Brasilia’s federal district congress.

The government expects to spend at least 26.6 billion reals (about $12.2 billion) on stadiums, airports, security and telecommunication infrastructure for the World Cup, Reuters reports.

That money would have lent a huge leg up to some of Brazil’s neediest people, residents complain.

“Here in Brasilia, where the elites live, things are better,” the social media professional said. “But the real situation, in the poorer states, is that health, education, are terrible. Inequality is exorbitant. Insecurity is awful.”

The protesters didn't miss the chance to rally outside Saturday's opening day of the Confederations Cup in Brasilia. One poster at the rallies read: “If your son gets sick, take him to the stadium.”

Match organizers cranked up the volume of the glitzy opening ceremony so that $100-ticket holders couldn’t hear the sound of tear gas canisters exploding outside.

There were some small pockets of violent behavior on Monday, notably in Rio, where local TV crews showed protesters setting cars on fire, and 28 were injured in clashes with police.

But protests in other cities remained largely peaceful, especially considering their scale. Organizers, like Jimmy Lima — a long-haired, soft-spoken 17-year-old who says he's named after Led Zeppelin rocker Jimmy Page — made a point of asking people to avoid confrontations.

“We were shocked by the police violence [in Sao Paulo last week], it was gratuitous. We want to show congress that the people are united, but peaceful,” he said.

And more than 30,000 people have said, on Facebook, that they will join another demonstration here in the capital on Thursday.

Whether this run of civil unrest will peter out after the Confederations Cup ends June 30 remains to be seen, says Santoro, the university professor.

“The big question is whether the agenda of diffuse dissatisfaction of the current protests will translate into an effective agenda of demand, and if the major parties will be able to react and initiate a dialogue to incorporate them into their programs,” he said. “Until now, Brazilian politicians have demonstrated great difficulty understanding the demonstrations.”

The mayor of Sao Paulo, Fernando Haddad, met Tuesday with representatives of Sao Paulo’s protest movement. But he refused to take back the bus fare rise. Even if he could, it’s not clear protesters’ demands could be met through meetings with municipal politicians.

Maybe the momentum now is just too great.

“In the last week there is a such a strong feeling of an awakening,” Caio Silva said, looking at the thousands thronged in front of congress holding glowing cellphones aloft.