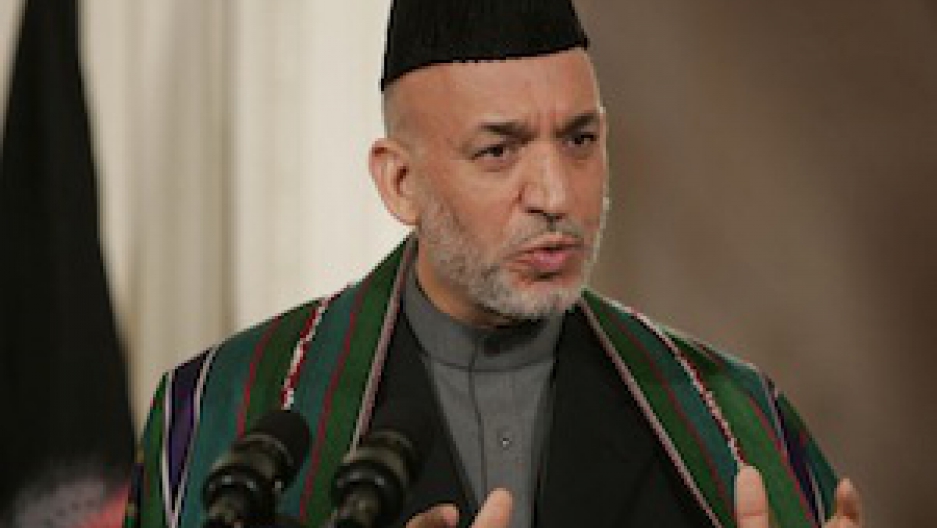 Afghan President Hamid Karzai says his government won't participate in peace talks with the U.S. and the Taliban. (File photo.)

Peace talks between the United States and the Taliban have already crashed into their first hurdle.

On Tuesday, the U.S. military handed over control of security operations to Afghan forces and announced officials would meet with the Taliban to begin peace talks.

The news led some to believe that an end to the bloody 12-year conflict was in sight. But just hours later, the Taliban launched a deadly ambush on an American convoy. Meanwhile, Afghan officials separately announced they were ceasing cooperation with the U.S. over the transition of power there, with President Hamid Karzai formally breaking off peace talks.

President Barack Obama, speaking in Berlin, said he has not given up hope, though..

"We still believe that you have to have a parallel track to at least look at the prospect of some sort of political reconciliation," Obama said.

Karzai's announcement came a day after the Taliban opened their political office in Qatar, flying a white Taliban flag and calling the building the "Islamic Emirate of Afghanistan." All this has angered Karzai who said that no such thing exists.

"A Taliban spokesman speaking live on Al-Jazerra said the reason for opening that office was to end the occupation, to liberate Afghanistan, and at no point did they mention they were ready to talk to the Afghan government," said Bilal Sarwary, a reporter for the BBC. "They did not discuss peace talks with President Karzai's government and that has really angered President Karzai and his government."

The Taliban, which have long called Karzai's government a "puppet government" brought in by Western forces, have strayed from the original written agreement they had with the Afghan government to stop discussing further bloodshed and killing.

The United States could face difficulty negotiating peace with the Taliban as they come closer than ever to getting Western forces out of Afghanistan. The Taliban's move to a political office is a likely indication of their desire to gain international legitimacy.

The United States, which announced its plan to, by year's end, remove 50 percent of the roughly 66,000 troops stationed in Afghanistan, may have little else to offer.

"Thus far, we in the international community, NATO, the Afghan government and really in the eyes of many of the Afghan people the Taliban has been seen as illegitimate, that they should not be running Afghanistan and they should join the process of building a new Afghanistan and recognize the Constitution, stop violence, things like that," said Kurt Volker, a former U.S. representative to NATO. "If they get legitimacy, as they are, without having to do any of those things I do think that's something they get out of this."

Kristen Rouse, a three-tour veteran of Afghanistan, called the Taliban a "ruthless enemy" but also said, "fighting alone will not win the war or the conflict in Afghanistan."

"Maybe there is something worth talking about with the Taliban but as they've shown, they've been absolutely ruthless," she said, "They've been willing to say a lot and say 'Oh we're the legitimate government of Afghanistan.' meanwhile they're killing many of their own people to include women and children."