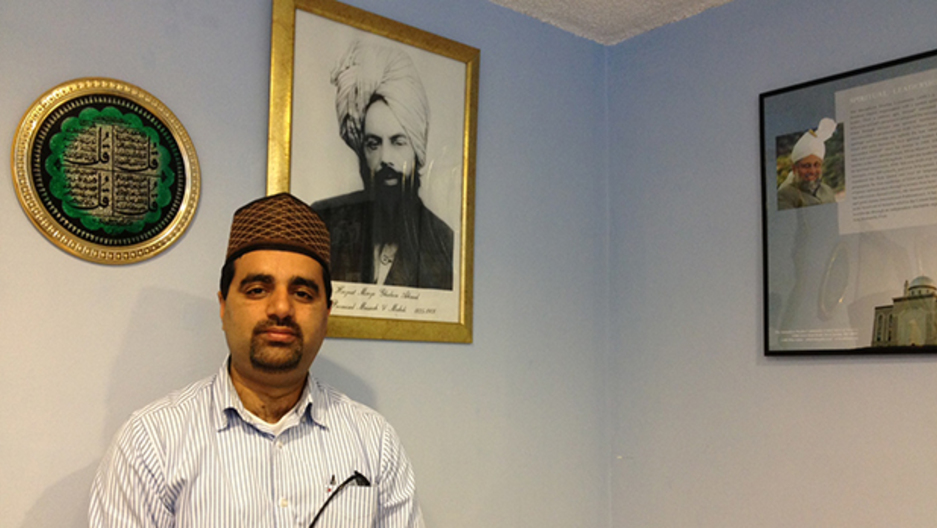 Mansoor Ishfaq inside the the Baitus Salam Mosque in Hawthorne, California. Ishfaq moved from Pakistan on a student visa in 2001 and has since received asylum in the US for religious persecution. (Photo: Ruxandra Guidi)

On a recent afternoon, a Beverly Hills hotel lobby was packed with people, as if a rock star was about to walk through the doors and security had to be beefed up. But instead, the bustle was for Hadhrat Mirza Masroor Ahmad, an Islamic spiritual leader on his first visit to California.

In front of clicking photographers, he delivered his message of peace.

"Do you ever feel your safety is at risk by taking such a strong, but moderate, peaceful position?," a reporter asked.

"You see," Ahmad said in a low voice, "my goal is to extend the message of Islam; the message of true Islam. No matter whether my life is at risk or not."

Jihad, or holy war, is a peaceful quest, he preaches. His beliefs seem easy to embrace. But not everyone agrees.

Ahmad, based in London, represents the Ahmadiyya Muslim movement worldwide. It's unknown to most Americans, but in the Muslim world it represents a departure from mainstream Islam, by believing that an Indian man–Hadhrat Mirza Ghulam Ahmad–is the Messiah, that he's already arrived, and that there will be no second coming of Jesus.

This set of beliefs defy the Prophet Muhammad's teachings–and that can leave Ahmadis condemend as infidels –and targeted by extremists abroad.

In the US, Washington has welcomed Ahmad, his sect's peaceful image, and the growing number of Ahmadis who have moved–or fled–to America after facing persecution abroad.

In 1984, the government of Pakistan passed an ordinance banning proselytizing by Ahmadis and also banned them from identifying themselves as Muslims.

Then, in 2010, an attack against two Ahmadi mosques in Lahore killed almost 100 followers of the faith. Since then, the number of Ahmadis coming to the US and Canada as refugees and asylum seekers has been rising—though there are no solid numbers to go by.

Still, Ahmadis represent only a tiny fraction of the overall Muslim population in the US, but there are an estimated 3,000 of them in Southern California.

Imam Shamshad Nasir, who drove more than 50 miles to see his religious leader, is part of America's new wave of Ahmadis. He hosts a weekly radio program in Los Angeles and speaks about his faith with evangelical zeal.

"The Constitution of the United States is very close to the Islamic laws," says Nasir, as he explains why Americans should embrace Ahmadiyya's strong rejection of terrorism. "Because Islam is the champion, which provides peace and freedom for each and everyone."

Thirty-six year old Mansoor Ishfaq, who also settled in California, saw himself as a closeted Ahmadi in Pakistan. But after arriving as a student in 2001, he went through a religious awakening in Southern California, where there are at least four Ahmadi mosques where Ishfaq can practice his faith openly.

"When I came here, I applied for asylum because I came to know that for me, it's not possible to go back," says Ishfaq. "If I go back, I'll face the same persecution that my mother went through."

At one of the Ahmadi mosques, the call to prayer began. An imam told Ishfaq to speak about the positive aspects of Ahmadiyya. But when asked to describe what makes his faith different, Ishfaq stumbled a bit. "Ahmadiyya," he said simply, "is a peace-loving Islam."

"It teaches you that it's okay to live with and accept other religions," says Ishfaq." I would not probably be able to get it as a Sunni Muslim, and probably in Pakistan, it would be very difficult to get it."

The way Ishfaq sees it, it would be difficult for Sunnis to "get" or understand that Islam is a peaceful faith. But it's also views like this–that present other Muslims as more prone to violence–that don't help build ties between Ahmadis and other Muslims.

"I guess they want to maintain their distinct identity and yet be part of it," says Shakeel Syed, who leads the Shura Council, a group uniting mosques and Muslim groups throughout Southern California.

"But in order for them to be recognized by mainstream Muslim community, I guess they have to give up on their core principles: that their Messiah is not a Messiah; their Messiah is just another good person."

This isn't likely happen anytime soon. As Ahmadis grow in numbers in the West, they're increasingly viewing themselves as leading the revival of a peaceful Islam.