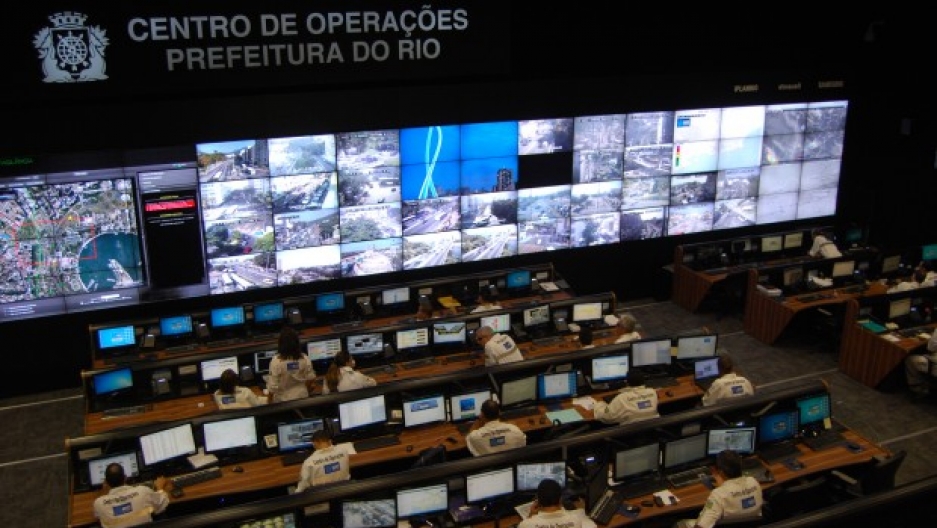 The Rio Operations Center has more than 400 cameras watching the city. Built to monitor traffic and weather, it will offer security help for the Olympics and World Cup. (Photo: Jason Margolis)

As Brazil gets ready to host the Olympics 2016 and World Cup next year, the country won’t just be dealing with threats from civil unrest. There’s also the threat of terrorism.

I spoke with a lot of people in Rio de Janeiro and asked, could something like the Boston Marathon bombings happen here? Here’s how most everybody answered.

He, and many Brazilians, often talk about crime concerns, but terrorism is something that happens in far off places. The Boston Marathon bombings did rattle some nerves though, said Tim Vickery, World Soccer Magazine’s South American correspondent.

“It was front page news here on the kind of weekly news magazines: Are we prepared?”

The group responsible for planning the Olympics, Rio 2016, has emphasized that security is a top priority, and has expressed full confidence in hosting a safe event, a point echoed by government officials at various levels.

That vote of confidence is largely justified, said Vickery, because authorities here have lots of experience dealing with mass events, such as Rio’s Carnival every year.

“They know the vulnerable points in their city, it’s a huge show of strength on the streets. But the level of sophistication needed to combat a terrorist threat, that’s something that they’re not particularly used to,” said Vickery.

For that, the Brazilians are looking to outside help, people like Jim McGee with The Soufan Group, a security consulting firm headquartered in New York. McGee spent two decades with the FBI working a lot of big sporting events, Super Bowls, the World Cup, and the Olympic Games.

McGee said terrorism may seem like an exotic threat to most Brazilians, but there is reason for concern.

“When you invite the world to your country, you invite not only all of the sporting teams and the fans, but you invite most of the problems that are occurring globally as well.”

McGee compares the situation in Brazil today to Greece, which hosted the Summer Olympics nine years ago.

“In 2004, we brought over, and when I say we I mean the FBI, we brought over subject-matter experts that we were able to embed right with their counterparts, within the Greek Hellenic National Police, the Greek Coast Guard, etc., the first responder agencies, their fire department,” said McGee. “So that they had our experts right there in an advisory role in the event of an incident or a crisis.”

McGee said he hopes the FBI – along with British, Australian, and Israeli security experts – will be in Brazil as well.

Rio state police officers are already working with the FBI and Spanish police, exchanging information about things like anti-terrorism tactics and chemical threats.

In Rio, the city government recently opened a new command and control center, a facility spurred by the upcoming Olympics. The room has 70 operators, in shifts, that monitor the city’s operation with more than 400 cameras installed at strategic points in the city. The room contains the largest screen in Latin America.

I took a tour of the control center with Victor De Martino, who works for the city of Rio as an international communications adviser. We stood on a balcony overlooking about 30 people monitoring the TV’s.

This room was designed primarily to monitor traffic and weather incidents, such as threats from mudslides. The state government just opened up its own control center nearby, solely dedicated to security. But it’s all integrated said De Martino.

De Martino adds, there will be many more cameras trained on Olympic facilities.

“In London, you can’t go anywhere where you’re not under the view of a camera. And that contributed to why the London Olympics went so well without an incident,” said McGee.

McGee said so far, overall, Brazil is taking the necessary steps to meet the security challenges posed from outside threats. That’s reassuring, but it is coming at a steep cost.

Street protesters in Brazil this week have been railing against the tens of billions of dollars being spent on preparations for the upcoming World Cup and Olympics.

Precise spending figures are fungible, as is the specific security budget. Anyway you add it though, Tim Vickery said for many Brazilians, all this hassle and cost just isn’t worth it.

Of course, there’s an upside too. If the World Cup and Olympics go off without a hitch, billions of people will see Brazil at its finest. Then maybe some of the costs and preparations won’t seem so severe.