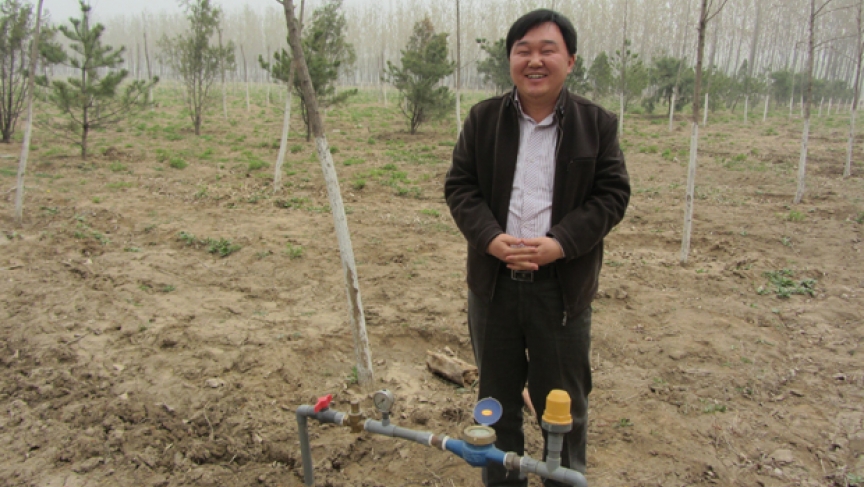 Growing more food with less water will be one of the biggest challenges in the coming era of surging populations and increasing climate disruption. In China, scientists say they've developed a new irrigation method that's twice as efficient as today's best technology, part of an increasingly urgent effort by researchers around the world to meet the water challenge.

China’s got a problem here.  It has a chronic and growing water shortage, and on the arid northern plain, where many thirsty crops are grown – the water table is plummeting, down hundreds of feet within living memory.  Most of China’s water use goes to agriculture, and much of that water is used inefficiently.

Surface irrigation is king in China – and on a farm on the outskirts of Beijing, a mushroom farmer is letting water gush from a hose – at high noon – onto a long raised mound of soil. 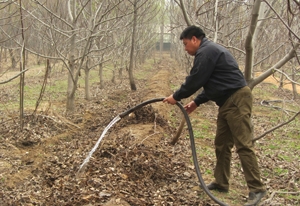 Normal surface irrigation on a controlled patch of experimental farm.

The inefficient use of water is common in China, but this is no common farm.  A stone’s throw away is another long, raised mound of soil, with no water source in sight.  Yet, the mushrooms underneath the canvas covering are firm and healthy, and the soil is slightly moist.

The first field is the ‘control’ – which shows what happens when you  do normal surface irrigation. The second field is trying out a new underground irrigation system, where the plants roots draw only the water they need.  Gu Yunxia, the agronomist managing this project, is impressed with what the new system makes possible.

“It cuts down on pests, and fungus and weeds,” she says.  “We save a huge amount of water, and the vegetables also have great flavor.”

This system was dubbed ‘trace irrigation,’ by its inventor, Beijing native and businessman Zhu Jun.

“I found if I put the chopsticks in water, and took them out, there was a little water going up between the chopsticks,” he says.  “And if I held the chopsticks higher, the water goes higher. And I realized, that’s actually the capillary force that I learned in the textbooks in primary school. And maybe that is a good way for irrigation.”

Capillary force, for those who might be rusty on what they learned in school, is when molecules are so attracted to each other that they can pull liquid against the force of gravity – kind of the way a kerosene lamp works. In this case, it’s the roots of a plant pulling water, and when they have enough, they stop pulling.

This system uses PV pipes, buried a foot or even deeper in soil. The pipes get narrower, and narrower, until they’re like thin straws, with something that looks like a tiny showerhead at the end, with little white threads coming out of it.   These pipes are buried in the soil – and the plant sucks the moisture it needs from these threads. 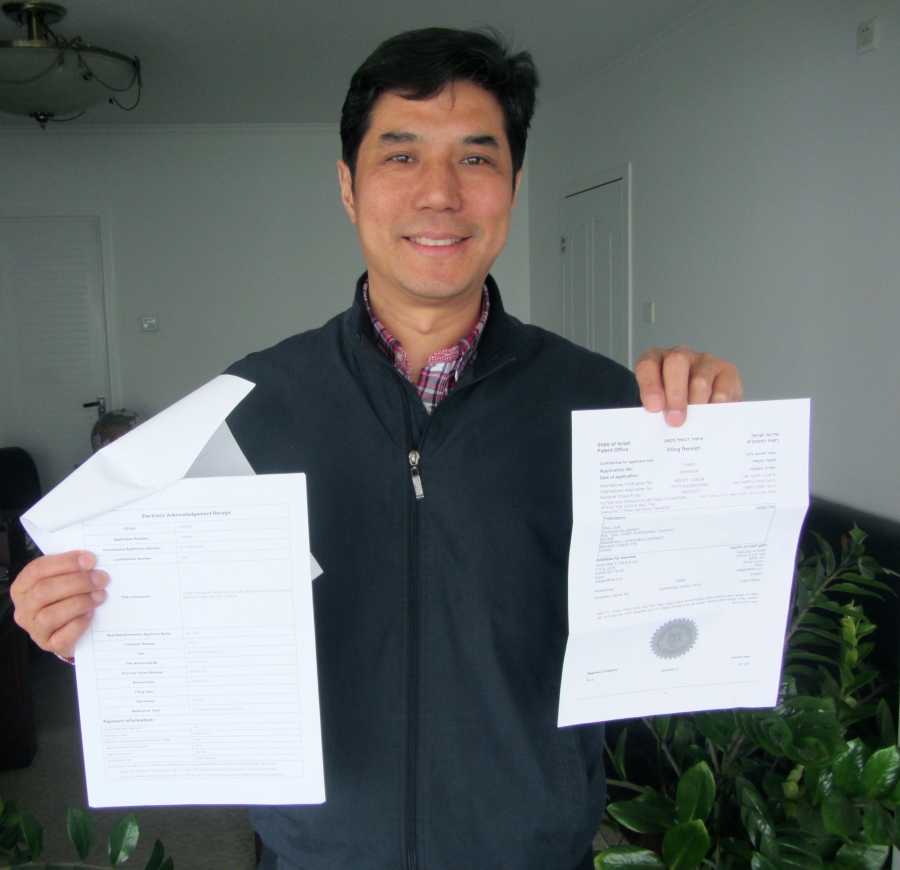 Trace Irrigation inventor Zhu Jun holds one of his applications for a patent on the technology. Zhu has so far been granted patents in China, New Zealand and Japan, and has applications pending in the United States and elsewhere.

Zhu says, he has worked on this system for about a decade. Before that, he’d worked on a technology called “dry water” – encasing water droplets in silicon.  A couple of pounds of the stuff is enough to grow a tree in a desert for 100 days – one of many solutions that the world’s scientists have been busy developing, to cope with a growing global water shortage.

Another is underground drip irrigation – similar to Zhu’s system, but with a recurring problem.  He says, in such systems, there’s a small and irregular flow of water, so pipes can easily get clogged.   And that’s been a limit on the otherwise revolutionary technology of drip irrigation that Israel first introduced decades ago.

“I found that if the capillary pipe gets too small, no matter how you purify the water, the particles in the water will still block the pipe,” he says.  “That was a bottleneck for me, for awhile.”

Eventually, he experimented with a double-membrane to filter particles, and found a combination that wouldn’t clog, even with very low water pressure.  That’s one of the innovations for which he’s seeking patents.

Zhu says his system saves 70 or more of the water used in surface irrigation in China, and 30 to 50 percent compared to drip irrigation.   Those are big claims, says Bob von Bernuth, the education director of the US Irrigation Association.

“Well, I guess anytime someone claims to save 50 percent of water, especially over drip irrigation, one becomes immediately skeptical,” von Bernuth says.  “I can tell you that it’s possible, but unlikely….it suggests they weren’t doing a very good job of saving water to begin with.”

In China, that’s true.  Many farmers don’t consider the true cost of the water they’re using, because they just divert rivers or drill wells to get it, so they often don’t use water efficiently.

And in China, there’s been significant interest in Zhu’s new system.  He has already received two patents his China and one in New Zealand and Japan for trace irrigation, and he has applications pending in dozens of other countries, including the United States.  Von Bernuth reviewed Zhu’s US patent application, and said it doesn’t seem that different from underground drip technology already in use.  But Zhu Jun says it is, and local Chinese governments are keenly interested.

Beijing’s municipal Science & Technology Commission, and its Municipal Agriculture Commission started doing their own trace irrigation trials six years ago, liked the results, and invested.  The city of Wuhan has offered him land to build a factory, and the government of Xinjiang – one of China’s driest regions – is now growing test crops.  If all goes well, they plan to use the system on a larger scale next year.  Saving half the water, without a fussy system that needs electrical power and lots of human supervision, would be a godsend for growing crops in the desert.

Meanwhile, Kim Ji-Seok, a Korean agronomist, was so intrigued by this new technology that he left his job with agribusiness giant Syngenta to join Zhu company Puquan – which means ‘spreading spring.’  He takes me for a tour around the experimental farm on the edge of Beijing – past walnut groves, peach trees, corn, cotton and peanut fields. 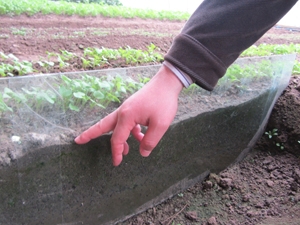 Agronomist Kim Ji-Seok points to soil with trace irrigation that is moist, but not wet.

“The government is quite excited about the result last year,” he says.  Excited enough to greenlight bigger scale trials – growing grapes, watermelon, jujubes, and licorice.

And Kim’s excited too.   It’s not so often an agronomist gets to work on what just might prove to be a game-changing technology that could help solve one of China’s – and the world’s -- biggest problems – lack of adequate water -- and maybe one or two other problems, to boot.

We walk into a greenhouse, with rain pattering overhead.  One section of the greenhouse– which uses drip irrigation – feels humid.  The other section, using trace irrigation, doesn’t.  Kim says, that’s because there’s less water in the soil to evaporate up.

“In this way, the diseases decrease,” he says.  “So we use less pesticides, less fungicides than drip line.”

And half as much fertilizer, too.  If the ‘trace irrigation’ system is used on a large scale throughout China, that would be good news for China’s lakes and rivers and groundwater, now choked with agricultural runoff.

Kim also shows off how uniformly attractive the vegetables on the trace irrigation side of the greenhouse are, compared to those using drip irrigation.

“If you use a drip line, the first one (along the line) is very big and tasty,” he says.  But then they get smaller, and at the end, you get a tiny one.  If it’s not uniform, you cannot sell them.”

It’s time to break for lunch, and Kim suggests we start with crudités – a little trace irrigation-grown celery.  I crunch into mine and declare it delicious.  Kim grins broadly.  And if this is a taste of things to come in China, growing better produce with less fertilizer, pesticide and much less water, there’s certainly something to smile about.