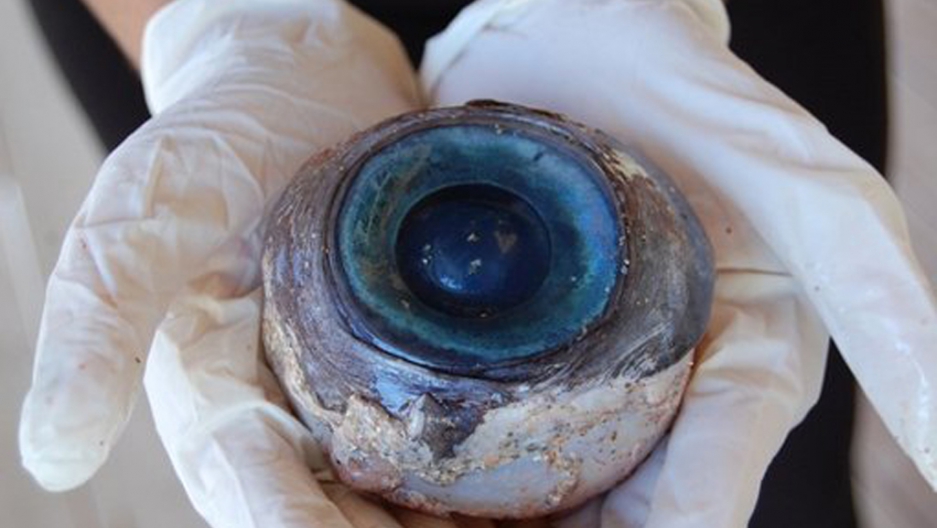 This giant eyeball washed up on a beach in South Florida last week, befuddling scientists. They now believe it belonged to a swordfish.
Credit: Florida Fish and Wildlife Commission
Share

Although it admittedly seems obvious that licking your best pal's eyeball for fun might not be among the best ways to spend your time, doctors have concluded the practice can spread viral conjunctivitis or "Pink Eye," that itchy and highly contagious eye ailment feared by grade-school teachers and parents alike.

Even worse, an eyeball-licking session with your best bro could potentially lead to eye-chlamydia, an unpleasant condition resembling pink-eye — wherein the sexually transmitted bacteria decides to take up unwelcome residence on one's eyeball.

Doctors now strongly advise against licking one's contact lenses to get them moist again, as one's mouth is a bacterial hotbed — meaning that each licked contact lens represents something of a game of medical Russian Roulette.

"Just ask my patient who used saliva to insert her contact lens when it dislodged during a corneal paper cut incident. She’ll tell you about her third corneal transplant," notes Christine W Sindt in the Review of Cornea and Contact Lenses.

The Japan Crush blog first broke the news (such as it is) in English after translating a forum post on the Naver Matome aggregation site from a reputed Japanese schoolteacher only identified as "Mr Y," who claimed that eyepatches and styes (eye swellings) had become unusually common in his classroom. He supposedly then found out the cause after stumbling upon two kids in the gym: the middle schoolers were indeed licking each other's eyeballs.

It's unknown how popular eyeball licking actually is among average Japanese schoolchildren, although the Internet frenzy over the weird practice is certainly topical — and a bit of Googling reveals that bored teenagers from around the world have actually been filming themselves licking each other's eyeballs for years now.

Does it feel good, to have your eyeball licked? Well, probably.

"The cornea is the most innervated part of the body," said Dr Robert Noecker to the Medical Daily. "That's why it might feel good to have it licked. It's the same thing with sucking toes — they're so sensitive because the body needs to be able to detect minor particles and other disturbances. If you're so inclined, that's the plus."

"Not to be a crotchety old guy, but... I frown upon it," added Dr Noecker. Sage advice.

It's thought the most recent incarnation of the trend came about at least in part after Japanese teens found themselves entranced by a scene in a music video by gothy hard rock group "Born" which features — you guessed it! — an eyeball licking scene.

Perhaps a "don't try this at home" rider should have been attached when it was released.