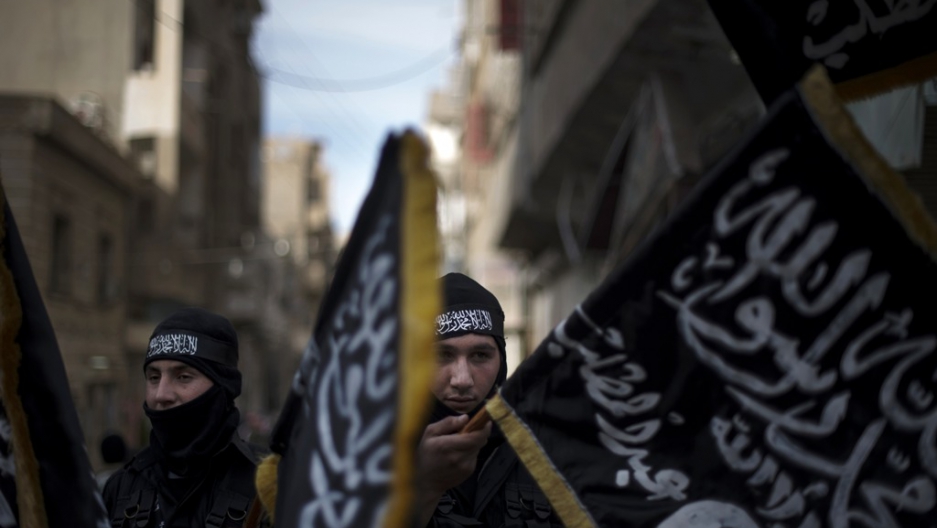 Members of Liwa Hamzah, a newly formed Islamist brigade from the Syrian eastern city of Deir Ezzor, hold flags of Jabhat al-Nusra on Feb. 25, 2013. The United States has deemed al-Nusra a terrorist organization, but it has widespread support among Syria's opposition.
Credit: Zac Baillie
Share

There appears to be some disagreement within Al Qaeda about Syria's Al Nusra Front, with Al Qaeda in Iraq claiming to have merged with the group in defiance of the terrorist organization's top leader, according to audio cited by Agence France Press.

This contradicted earlier claims from ISI that it had united with Al Nusra and become the Islamic State of Iraq and the Levant.

Zawahiri's letter, in which he said ISI leader Abu Bakr al-Baghdadi "had made a mistake" on the merger announcement, did not appear to have gone down well, according to a Saturday audio message attributed to al-Baghdadi.

"The Islamic State in Iraq and the Levant remains as long as we have a pulse or an eye that blinks; it remains, and we will not bargain with it or back down from it," said the alleged al-Baghdadi audio, according to the SITE Monitoring group as cited by Reuters.

"It remains, and we will not compromise; we will not give up... until we die," the voice added, going on to address Zawahri personally:  "Regarding the message which was attributed to Sheikh Ayman al-Zawahiri ... [I] was put in a situation, to choose between God's command and an order against God," AFP cited the message as saying, concluding: "I chose the order of my God, over the order against it in the message."

For its part, Al Nusra had reportedly protested its alleged merger with ISI, said Reuters.

The Al Qaeda-affiliated extremist group formed in Syria in January 2012 and soon threw its support behind the Syrian rebel movement seeking to overthrow of Syrian President Bashar al-Assad, part of an over two-year conflict that has left an estimated 80,000 people dead. The group has since been blacklisted by the United States as well as the United Nations,