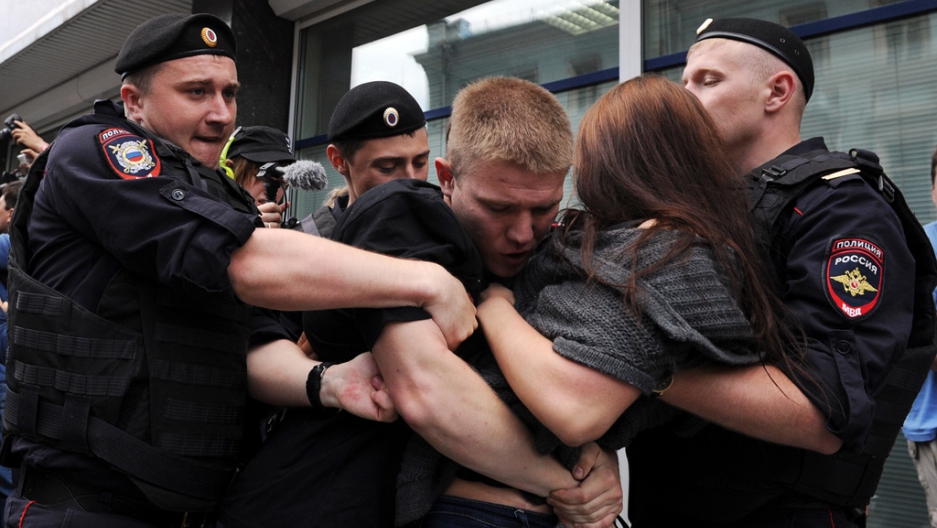 Approximately 74 percent of Russians still consider members of the Lesbian, Gay, Bisexual and Transsexual (LGBT) community to be mentally ill, according to the Russian Levada Center.

The Russian Parliament reflected this sentiment on Tuesday when it passed legislation banning “the promotion of homosexuality,” or “homosexual propaganda,” among minors. The bill was passed by the State Duma in a vote of 436-0.

The legal definition of homosexual propaganda remains murky, as questions about Elton John’s stage attire, the use of a rainbow on one company’s dairy product packaging, and Madonna’s pro-gay remarks at a concert come up for debate.

“This bill is outrageous and incredibly dangerous for millions in Russia - both gay and straight,” said Andre Banks, executive director and co-founder of gay rights activist group All Out. “This is a dangerous crackdown on free speech. No one will be safe from the witch hunt that will ensue.”

If passed, the legislation will be Russia’s first federal law directed at the LGBT community since the decriminalization of male homosexual acts in 1993—a move that begs the question: what is behind the sudden regressive attitude toward LGBT rights in the last five years?

Activists and experts have argued that the soon-to-be federal law is just one measure in a wider Kremlin crackdown—backed by the strictly conservative Orthodox Church—on public protests, civic activity, and the liberalization of society. The church’s power in the crackdown, said Joe Mirabella, director of community campaigns for All Out, may have something to do with declining acceptance of homosexuality.

“While I don't have specific polling data that can explain the decreasing support in the polls, what we have seen is that the Russian Orthodox Church is increasingly involved in legislation and policy,” said Mirabella.

A June 4 Pew report presenting statistics for countries’ views on homosexuality shows that only 16 percent of Russians believe that homosexuality should be socially accepted. That number is down from 20 percent in 2007, making Russia the most intolerant country towards homosexuality in Europe.

Statistics published in a 2011 non-governmental Levada Center study show a corresponding decline in Russian “non-believers” and a rise in Orthodox Christians from just over 60 percent of the population in 2006 to 76 percent in 2011.

This emphasis on the involvement of the church—a religious body that Russian Prime Minister Vladimir Putin increasingly calls upon, as with the case of the 2012 Pussy Riot controversy—highlights a paradox of the secular state, said Susan Abraham, Harvard Divinity School’s expert on religion and politics and Professor of Ministry Studies.

In a capitalist society, Abraham said, individual expression is encouraged, and religion is considered a form of that individual expression. So the decriminalization of homosexual activity empowered the Russian LGBT community members to display their sexual identities, while religion could equally express its intolerance. Hence, the parallel co-existence of religion in “so-called” secular societies.

Repressive religious practices against women and sexual minorities is nothing new in the nation states that are attempting to be "different" than Western secular capitalism, Abraham explained. What is most interesting, she said, is when religion in a secular context functions as the basis of collectivity that seems to be critical of secularism—a trend that is in need of critique, she says.

“Here, religion, whether Hindu, Muslim or Christian, becomes the basis of an aggressive new national ideology where religion is very much part of the secular nation state's self presentation, particularly in the manner that it understands the role of women and correct sexual expression (heterosexual marriage in church),” Abraham said.

The new federal law will make it illegal to equate homosexual and heterosexual relationships or distribute any information pertaining to gay rights anywhere in the Russian Federation. Prior to becoming federal legislation, the law was implemented locally in the cities of Ryazan, Archangelsk, Kostroma and St. Petersburg.

Having passed in its second reading, the legislation will now go to the upper house, where it is expected to be easily accepted. Critics anticipate Putin will then sign the bill into law.

Russian media, NGOs, or members of the public would be fined if they are caught breaking the law, while foreigners may face fines or deportation.