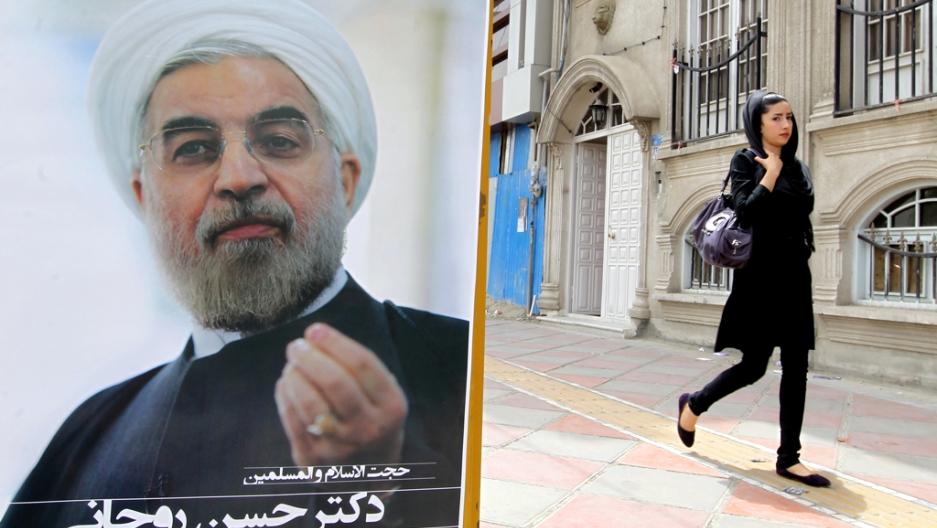 Political posters are hanging from city walls, and enthusiastic rallies and informal marches are taking place across the capital.

Six major candidates approved by the Guardian Council, a government religious body, are running to replace Mahmoud Ahmadinejad as Iran’s head of state.

This year's contest is a far cry from four years ago, when tens of thousands of Iranians took to the streets in spontaneous protests prior to the presidential election. That activism is missing this year as voters focus on a stalled economy. The lineup of mostly conservative candidates are unlikely to take on the ruling establishment.

Several weeks ago, the Guardian Council eliminated two of the strongest candidates who might have challenged Iran’s religious and military leaders, including former President Ali Hashemi Rafsanjani and Ahmadinejad ally Esfandiar Rahim Mashaei.

More from GlobalPost: Who will be Iran's next president?

The government is also working hard to prevent mass demonstrations similar to those that broke out both ahead of and following the 2009 polls against what demonstrators said was a fraudulent vote. The state is also encouraging voters to head to the polls in a bid to boost its legitimacy after the last vote’s fallout.

High turnout in Friday’s elections “would show [the government’s] popularity,” said Mohammad Sadegh Jananansefat, a prominent economist and editor of Industry and Development, an economic and political magazine.

As part of the government effort to pique voter interest ahead of the June 14 polls, the candidates were featured in three televised debates last week.

Powerful rhetoric flowed, and even some personal invective, but candidates discussed few specific policy issues. None offered detailed suggestions for ending Iran’s diplomatic isolation due to its nuclear program, nor for improving the country’s economic situation.

Official unemployment now stands at 13 percent, and inflation hit 31 percent last month, with food prices jumping a staggering 50 percent over the past few months. Analysts here attribute the economic problems to the impact of US sanctions, along with government mismanagement of the economy.

He is largely viewed as a moderate, and some who participated in the 2009 protests — which later became known as the "Green Movement" — are rallying behind him, including at his public campaign events in Tehran. Rafsanjani, who champions better international ties, endorsed Rouhani for president on Tuesday.

“Rohani is a moderate who will support people’s rights,” said one supporter, Maryam, who asked that her full name not be used. At a Rohani campaign rally in Tehran on Saturday, which thousands attended, she wore a Green Movement plastic wristband.

“It’s important to vote for him, even if he loses — to show popular support for reform,” she said.

But Rohani faces an uphill battle against a league of strong conservative contenders with the implicit backing of Ayatollah Khamanei. Iran has a weak presidential system with all real power resting with the Supreme Leader. He makes key decisions about foreign policy and the nuclear power program, for example.

Mohammad Baqer Ghalibaf, a leading conservative candidate, is the former police chief and mayor of Tehran. He recently bragged of his participation in a brutal crackdown on students at the University of Tehran in 1999.

"We were part of the group that beat people," he said at a campaign event. "And I am proud of it.”

At a small grocery in central Tehran, owner Mocher Odaj has plastered his windows with Ghalibaf posters.

“He brought law and order to Tehran,” Odaj said.

Iran’s current chief nuclear negotiator is Saeed Jalili, who maintains a hard-line position when it comes to talks with the US. He has criticized both the Green Movement the moderate politicians who questioned the 2009 crackdown as “promoting sedition.”

That endears him to many conservative voters.

"He didn't compromise during the nuclear negotiations," said Saeed Mohammad Husseini, a Jalili supporter who works at a store selling religious CDs.

"Velayati will skillfully negotiate with the West," Husseini said.

However, Western powers — not Iran — will have to shift positions "because we shouldn't change our nuclear power program, which is for peaceful purposes only," he said.

If no candidate wins 50 percent plus one vote, then the top two contenders will participate in a runoff on June 21.

This reporting initiative is made possible with support from the Henry Luce Foundation and is in partnership with the Knight Program in Media and Religion at USC Annenberg School for Communication and Journalism.