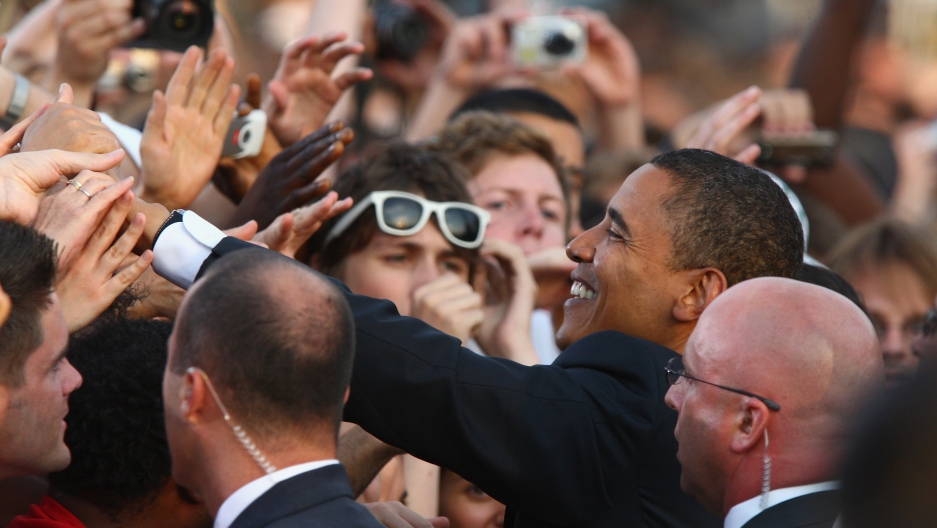 Polls showed up to 90 percent of Europeans would have voted for him in November's election, but their faith has been rocked by revelations of global cyber-snooping by US agencies under Obama's watch.

"How can we speak about an EU-US special relationship, when President Obama explicitly says that they only spy on foreigners? That means us," Sophie in 't Veld, a Dutch member of the European Parliament, said during an emergency debate on the scandal Tuesday.

Europe's outrage has cut across borders and political affiliations.

"The suspicion of excessive surveillance of communication is so alarming that it cannot be ignored," German Justice Minister Sabine Leutheusser-Schnarrenberger told the news weekly Der Spiegel.

The British newspaper broke the story last week, along with the Washington Post. They carried leaks by whistleblower Edward Snowden who said the US National Security Agency was monitoring the phone, email and internet activities of foreign citizens through companies such as Google and Facebook, under a program called PRISM.

More from GlobalPost: The rise of the American antihero

The story's incendiary impact could hardly have come at a worse time for Obama.

He's preparing to fly east next week on a mission to rekindle relations with Europe's politicians and public, and help kick-start negotiations on a trade deal designed to inject $200 billion a year into the trans-Atlantic economy.

Obama's due to attend the G8 summit of world leaders in Northern Ireland on Monday and Tuesday before flying to Berlin for a speech packed with symbolism.

At the invitation of Chancellor Angela Merkel, he will speak to the German people from the Brandenburg Gate almost 50 years to the day since John F. Kennedy proclaimed "ich bin ein Berliner" and ensured speeches in Berlin are a big deal for US presidents.

Obama will be making his at the same spot where Ronald Reagan invited Mikhail Gorbachev in 1987 to "tear down this wall."

The White House says Obama will address "the deep and enduring bonds between the United States and Germany, the vital importance of the trans-Atlantic alliance, and the values that bind us together."

His hopes of a tumultuous reception have, however, been dimmed by PRISM.

The cover of Der Spiegel's current edition has a photo of Obama in Kennedy's shadow with the headline: "The Lost Friend."

History has made Germans particularly sensitive about privacy and spying by secretive government agencies and the German press has been full of reports that their country was the one most widely targeted by the NSA program.

Merkel's spokesman says the chancellor will be pressing Obama on the issue. With elections in September, she's under pressure to get an explanation.

One of Merkel's conservative supporters in the European Parliament, Markus Ferber, accused the NSA of using "American-style Stasi methods," a reference to notorious secret police in communist East Germany.

"I thought this era had ended when the DDR fell," Ferber told Reuters, referring to Soviet-backed German Democratic Republic, which collapsed in 1990.

The German left has been even more outspoken — with some politicians demanding Merkel grant political asylum to Snowden, a technology expert working for a firm subcontracted by the NSA, who was last spotted in Hong Kong preparing to fight US extradition efforts.

Beyond raining on Obama's parade in Berlin, the PRISM affair could have wider consequences for trans-Atlantic relations, making Europeans even more reticent about entering into data-exchange and intelligence sharing deals with Washington.

"The EU must take a strong position on the use of data in the US and ensure that we fight for the protection of our citizens' data," said Claude Moraes, a member of the European Parliament from Britain's Labour Party.

The EU's Commissioner for Justice Viviane Reding has written to US Attorney General Eric Holder seeking "detailed explanations." The two are scheduled to meet Friday for talks in Dublin.

She also carried a warning for internet companies who collaborated with PRISM and "give priority to US laws over EU fundamental rights."

Tension over the surveillance program could also strain negotiations the US is hoping to start with the Europeans next month with the aim of wrapping up a deal to create the world's biggest free-trade zone by 2015.

GlobalPost Q&A: EU’s trade commissioner on free trade with the US

Privacy was always going to be a sensitive issue. Now Europeans can be expected to play even harder ball over respect for data protection.

"Any EU-US trade pact will have to fully ensure the highest standards of data privacy for all citizens," said Hannes Swoboda, who heads the Socialist group in the European Parliament.

"It is no good the EU having strict regulation on data protection if those standards are not guaranteed when using US-based internet companies."