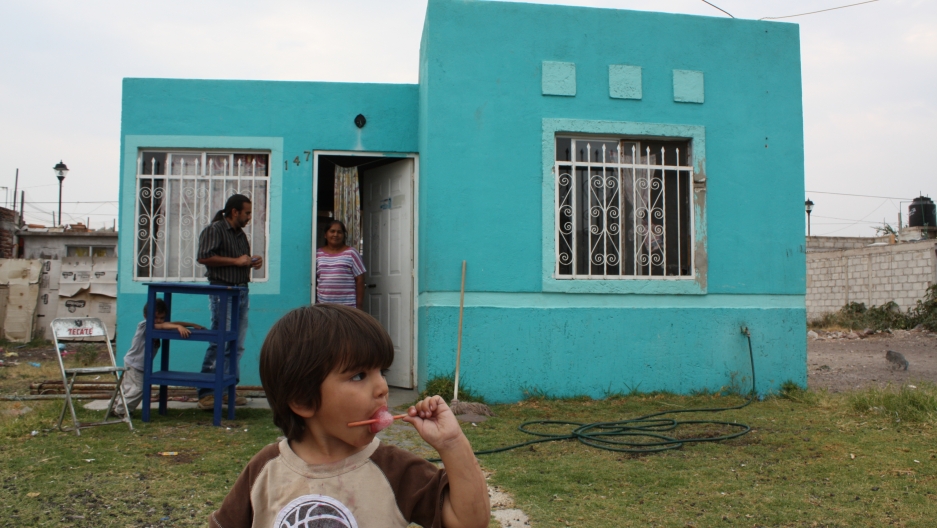 As part of our Global Nation coverage, which focuses on a changing America as its population becomes more diverse, stories related to Latin America are prevalent. It's where the predominant number of immigrants in the US come from and, often, their stories involve complex cultural interactions, involving everything from personal identity and language to politics and music. Today, we are pairing with an exciting project called Radio Ambulante. Together, we will focus on bringing stories from Latino communities across the US. Some of these stories will also be offered in both English and Spanish.

Here is a first installment, about a man whose deportation to Mexico separated him from his wife and kids in the US and landed his children in foster care. The piece was co-produced by reporters Seth Freed Wessler and Nancy López.

Also, after the jump, I've selected a few previously produced Radio Ambulante stories, a mix of pieces in Spanish and English.

Felipe Montes's story begins in October of 2010, in Sparta, a small mountain town in North Carolina. After breakfast with his wife, Marie Montes, and their young kids, he walked to the courthouse for a routine parole meeting. He had wracked up too many traffic violations.

But this time, immigration officers were waiting for Montes. After almost a decade of living in the US without papers, he was deported to Mexico, away from his family.

In Mexico, Montes worked non-stop, anything to not miss his wife and kids.

And then things got worse. Montes's wife, Marie, had debilitating health issues. She struggled without Montes; he was the kids' main caretaker and family breadwinner. And soon after he was sent to Mexico, officials from the county Department of Social Services put the couple's three young US-born sons, Isaiah, Adrian, and Angel, in foster care.

From Mexico, Montes said that he could care for his kids. He and his wife agreed that if the boys could not remain with her, social services should send them to Mexico to be with their father.

For the next two years, Montes would fight to reclaim his children.

Montes is not alone. The US deported at least 180,000 parents of US citizen children in the past two years, based on government data requested by the news site Colorlines.com. It has left thousands of children in foster care.

Donna Shumate is Montes's court-appointed attorney in the child welfare case. As the legal case began, Shumate realized that the state of North Carolina lacked clear policies for reuniting families separated by deportation.

"I asked the question of the social worker on the witness stand a few times, if the Department of Social Services had a policy with dealing with parents who were not US citizens, who were actually located outside of the country, whether it be Mexico, France, Canada, wherever," Shumate says. "And each time I asked the question, the answer was, 'No, we do not have a policy.'"

Without any clear rules to guide social services, county officials argued that Felipe and Marie's kids should stay in foster care. Those officials and the foster families involved declined interviews for this story.

As for Montes, the outlook was grim. He was in Mexico and could not defend himself in person. He faced permanent separation from his kids.

Then, last August, after immigration advocates rallied around his case, calling on local officials to reunite the family, US immigration officials made the rare decision to allow Montes to return, temporarily, to North Carolina to fight for his kids.

But his return was not easy. When he first visited with his sons in a room in the basement of the Department of Social Services building, Isaiah, 5, asked Montes, "Are you going to adopt me?"

"I didn't come to adopt you, I'm your father," Montes responded. "I've come for you because I love you."

In court, Montes argued that he had always cared for his kids. I'm their father, he said.

After months of hearings, the judge ruled in Montes's favor. Donna Shumate, Montes's attorney, explains what led to the decision.

In March, nearly two and a half years after he was deported, Montes boarded a plane to Mexico, this time with his sons. Because of her health, his wife Marie didn't follow.

I met the father and his sons in the Mexican state of Michoacán, located in the country's rural central area. They lived with Montes's mother and siblings in a tiny house. The kids seemed happy, playing in the street with neighbors. But they were also in a country they had never known.

"Everything for them is new," Montes says. "It's totally different than what used to be." He talked about work being more available in the US, and that the kids were used to playgrounds and front yards with grass. In contrast, Montes says, Mexico looks bland to the kids, just dry fields.

But one person was thrilled about the family's arrival in Michoacán: Montes's mom, Griselda. She had not seen her son for years, and she'd also never met her three grandchildren. She called them precious.

Montes tried to ease the transition for his sons. The first day he left the house to look for work, he left a list of English translations for his mom. She took care of the kids, but only speaks Spanish. Montes wrote down that when the kids say, "I want something to eat," it's quiero algo de comer in Spanish. After a week though, the boys were already beginning to understand their grandmother's Spanish.

But after being separated first from their father when he was deported, and then taken from Sparta and the foster homes where they lived for two years, the children worried about abandonment every time their father walked out the door.

Montes tells his kids, "I never left you. I just got deported last time."

Montes is also struggling in Mexico. Home is in North Carolina with his wife. And he has a landscaping job waiting for him there. In Mexico, he found some work loading scrap metal onto trucks. But it barely pays, and it's why Montes headed to the US in the first place.

"For the whole month I've been in Mexico, I've worked five days, total," Montes says. "The problem is, I tell my mama, I start getting depressed and upset about it because I'm not working and I'm not providing for the kids."

Montes hopes that he will be able to return to the US with his kids, for good. "I can come back to America and be with my wife and my kids, start a new life, together, like a family, like it used to be before the deportation," Montes says.

For that to happen, he is betting on the immigration reform bill being debated by Senators now. In it, there is a provision that would let deportees with kids, parents or spouses in the US apply to return.

This story was also made possible by contributions from Colorlines, Culture Strike and the Ford Foundation.