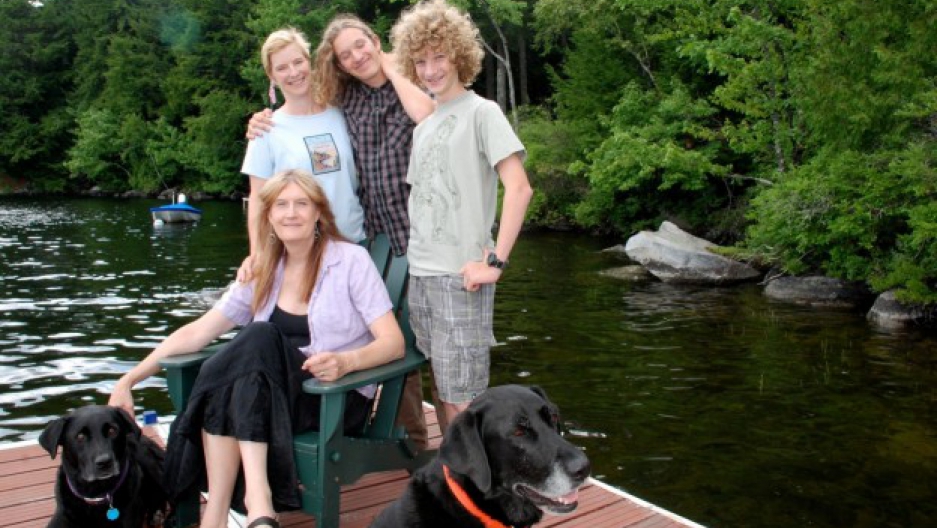 When Colby College English professor Jennifer Finney Boylan transitioned from male to female a little more than ten years ago, she remained married to her wife Deirdre, and the couple continued to raise their two sons.

Boylan’s new memoir, “Stuck in the Middle With You: A Memoir of Parenting in Three Genders“ not only recounts stories of that last decade, it includes conversations with fellow writers Richard Russo, Edward Albee and Ann Beattie — or as Boylan puts it, “moms, dads and former children.”

The result is an in-depth look at the nature of parenting.

On Sunday, the Boylans will celebrate “Maddy’s Day” — a combination of the words “mommy” and “daddy” — instead of Father’s Day.

Jennifer and Deirdre’s son Zach re-christened the holiday when he was six, to accommodate Jennifer’s transition from male to female.

But less changed for the family than they expected.

“I was always the one who had to teach them how to throw a football anyway,” Deirdre Boylan said, referring to her two boys. “The most fundamental aspects of Jenny haven’t changed ... I’m still married to the person I fell in love with.”

The couple is approaching its 25th wedding anniversary.

But she says she still feels guilt for changing “the contract of our marriage” — but it isn’t something her wife holds against her.

Often, during Boylan’s coming out process, people expressed support for her transition, but concern for her family.

“Here we are, 10 years later, and both of our sons are thriving,” she said. “I don’t think that there’s anything that I could have given them as a man that I haven’t been able to give them as a woman. I would argue that what my boys have gotten, as a result of having me as a parent, is much greater than any loss.”

While the Boylans’ story may seem unusual, a majority of American families no longer conform to the traditional model of stay-at-home mother, bread-winning father and children, Jennifer Boylan pointed out.

“And I would argue, in fact, that this is a good thing,” Boylan said. “We’ve come to accept and embrace and celebrate the great variety — the different ways–there are of being human.”