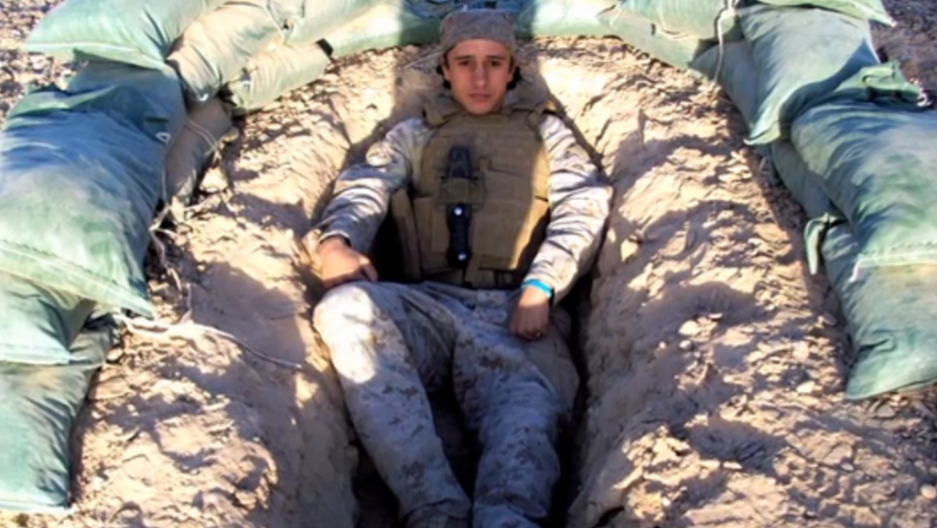 Mansoor, an Afghan translator for the US military, has been waiting for two years for a visa to come to the United States.
Credit: Beth Murphy
Share

KABUL, Afghanistan — The first thing you notice when you look at photos of Mansoor, an Afghan translator for the US Marine Corps in the southern provinces of Afghanistan, is that he looks very young. His small, lean frame, his open demeanor, and his boyish features make him look more like a kid brother on a field trip with military officers than like a young man who risks his life every day to help them.

It has been five years since Mansoor first started working for the US military, and now, like nearly everyone in Afghanistan, he is closely monitoring the withdrawal of US troops from his country and worrying about his fate and that of his family.

I interviewed Mansoor last month in Afghanistan, and I had a chance to look at his records and the enthusiastic commendations and certificates he’s earned for his service. He has assembled these documents as part of an application for a Special Immigrant Visa (SIV) to come to the United States. The US government sets aside 7,500 of these visas to help American-employed Afghans move out of the country that has become a constant danger to them.

Five years ago when I started working on my documentary film THE LIST, I learned about tens of thousands of Iraqis whose lives were in jeopardy because they worked for the allied forces.

These translators, guides, and clerical workers were being directly targeted by radical militias in their country. And even though the US government set aside 25,000 SIVs to aid them, few were being issued. That is still the case.

Today, the same thing is happening to Afghans who have helped American forces and aid organizations. Every month, interpreters and their families are attacked because of their work. In May, five family members of a translator who worked with Canadian forces were slaughtered in retribution for his choice of employer. Three of the victims were children.

While I was in Afghanistan, I was able to arrange a phone interview with a representative from the Taliban. This journalistic coup soon turned into a soul-chilling reminder of how malevolent and brutally organized the group is. The representative hastened to say that yes, Afghans who work for the United States of any foreign entity are targets. “They are the eyes [and ears] for the enemy,” he responded, when asked about the rise in violence against Afghan interpreters.

Despite the SIV program, the US has done little to come to the aid of even highly regarded workers like Mansoor. Mansoor has in his file personal recommendations from a US General and a Colonel, and yet his application has languished for two years.

The reasons are manifold: it seems some involved in the visa process fear pushing the paperwork for the next terrorist, despite the thorough vetting required for every application. It has also become apparent that many government agencies, like the public in general, are tired of hearing about Afghanistan, tired of worrying about its people, and cold to their cause.

"The Afghan program has been damaged since its inception by a number of factors, which include resistance by the US Embassy in Kabul, the lack of any coordinated advocacy campaign on behalf of US-affiliated Afghans here in the US, public apathy, and bureaucratic torpor," said Kirk W. Johnson, founder of The List Project, an organization that has helped more than 2,000 Iraqis obtain visas to the United States. "Of course we could and should be more fair in carrying out the promise we made in granting visas to those who worked for us."

Also hurting Afghan translators' chances of getting visas are some American diplomats and power players, who know full well the value of Afghan employees to our military and are not willing to help someone like Mansoor — who has served faithfully for five years —because he cannot be easily replaced. In a cable to Secretary of State Clinton, former ambassador Karl Eikenberry wrote about the difficulty of replacing Afghan workers for the military.

“Local staff are not easily replenished in a society at 28 percent literacy,” he wrote. “If we are not careful, the SIV program will have a significant deleterious impact on staffing and morale.”

After that communique in 2010, a virtual freeze was put on the program.

In March, a bipartisan group of 19 US representatives called on President Obama to extend and reform the visa programs for both Iraqi and Afghan allies.

“The US has a responsibility to follow through on our promise to protect those Iraqis and Afghans who have risked their lives to aid our troops,” the legislators said in an open letter to the President. “The extension and reform of these programs is a matter of national security.”

More than two months after the letter was written, there has been no response from the White House.