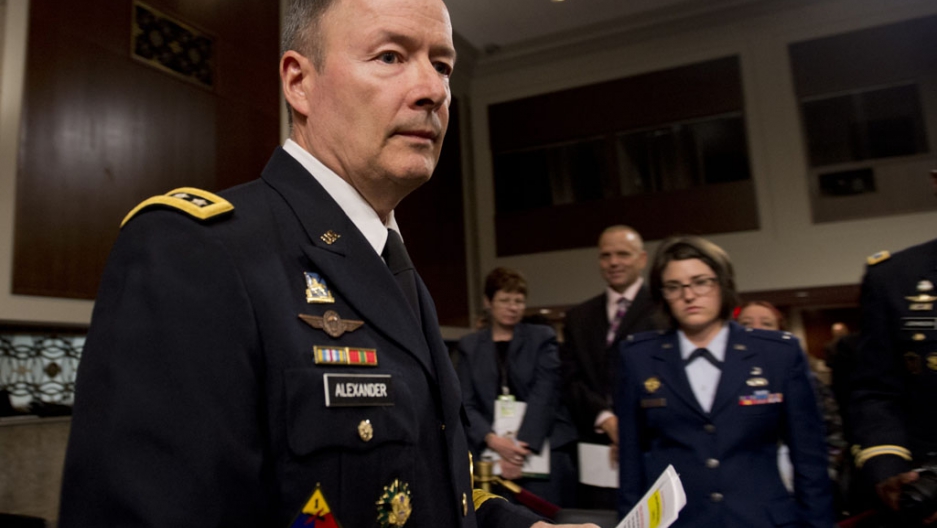 General Keith Alexander, director of the National Security Agency (NSA), commander of the US Cyber Command and chief of the Central Security Service, arrives to testify before the Senate Appropriations Committee on Capitol Hill in Washington, DC, June 12, 2013. The committee is holding hearings on the agency's PRISM program, which tracks web traffic and US citizens' phone records.
Credit: SAUL LOEB
Share

Gen. Keith Alexander, the head of the National Security Agency, testified in front of the Senate Appropriations Committee on Wednesday.

The NSA has dominated the headlines recently after whistleblower Edward Snowden leaked documents to the Guardian and The Washington Post on surveillance programs that the intelligence agency was running, which gathered massive amounts of data from people's phone records and online activity.

Sen. Patrick Leahy asked Alexander how many terrorist acts had been stopped using phone records collected by the NSA under the Patriot Act. His response was that the phone data collection had helped prevent "dozens of terrorist events" both in the US and abroad.

"I don’t have those figures today," Alexander said when pressed for exact numbers. "Over the next week it will be our intent to get those figures out."

"I want the American people to know that we're being transparent in here," Alexander added.

Section 215 of the Patriot Act authorizes the government to obtain business records when they are relevant to terrorism cases.

Alexander also cited section 702 of the Foreign Intelligence Surveillance Act as instrumental in developing a case against Najibullah Zazi for attempting to bomb the subway system in New York City in 2009.

In his prepared statement, Alexander said, "We do not see a tradeoff between security and liberty. It is not a choice, and we can and must do both simultaneously."

In addition to Alexander, who also serves as the director of US Cyber Command, the other people testifying included Rand Beers, an acting deputy secretary of Homeland Security, Patrick Gallagher, the director of National Institute of Standards and Technology, and Richard McFeely, the executive assistant director of the FBI's Criminal, Cyber, Response and Services branch.