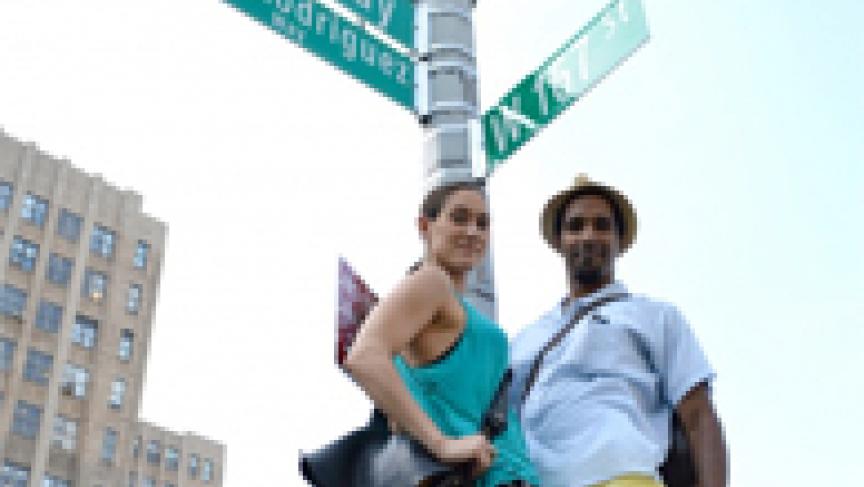 On a recent evening in New York City, artist Maija García gears up for a night of theater. First, she stands on stage and asks the audience a question.

Juan Rodríguez was the first non-Indian immigrant to settle in Manhattan. Be he wasn't Dutch or English. Rather, he was from what is now the Dominican Republic.

García and her collaborator, Armando Batista, are bringing Rodríguez's little-known story to the stage. But it is not the only tribute he is getting in New York. Juan Rodríguez Way is the new name for three miles of Broadway, the part that runs through heavily Dominican neighborhoods like Washington Heights and Inwood.

To learn more about this early New Yorker's life, I went on a stroll down Broadway with García and Batista.

Armando Batista is an actor and educator with Dominican roots who plays Juan Rodríguez on stage. He was born and raised in Washington Heights, just 20 blocks north of the street corner where we are standing.

"It's personal, it feels personal, it's someone I can look up to, and I can be inspired by," says Batista. He sees Batista as "a symbol to inspire others and other young people."

Batista and García's play re-imagines Rodríguez's immigrant life—what he first saw and did when he got to Manhattan in the early 1600s. Standing on the newly named street, Batista reads a few lines from his play.

How do we know that Rodríguez was the city's first non-Native American immigrant? Scholars have long believed the Dutch settled here first, about 400 years ago. But there's enough consensus now to rethink that.

Anthony Stevens-Acevedo, at the Dominican Studies Institute at City College of New York, dusted off the research that confirmed Rodríguez's existence.

"We know he spent about a year here," says Stevens-Acevedo. "We know he was a pretty independent guy. And he seems to be a fellow with a very strong sense of his own dignity and independence."

We also know he was a free man who came aboard a Dutch merchant ship in 1613, and insisted on remaining in New York, even threatening to jump overboard should he be forced back on the ship.

Stevens-Acevedo then tours me around the Institute's archives. He shows me some of the first documents that gave clues to Rodríguez's existence, scans of 16th- and 17th-century papers, yellowed by age.

And García, the actor, sees potential for Rodriguez's story to have an impact on more than just the Dominican community.

"We want young people, especially young people of color in New York City, to have a founding father they can call their own," she says.

The next step, some historians say, is to move Juan Rodríguez from being just a new street name to hearing his story in the classroom.